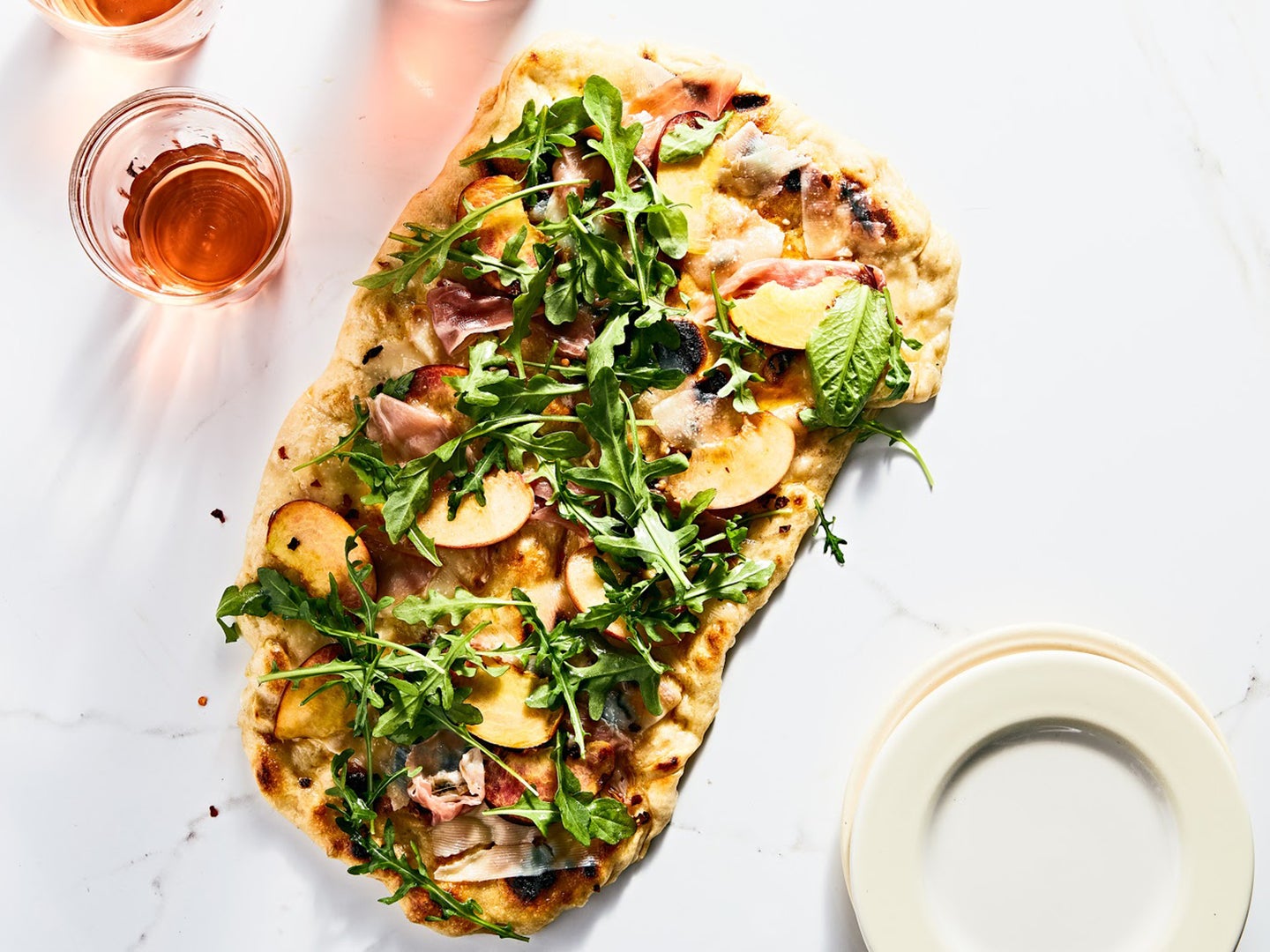 For a state that’s not known for pizza, Rhode Island has some surprisingly good pies. Take the “bakery strip,” an appealingly greasy rectangle of room-temperature dough topped with red sauce and grated Parmesan that you can buy at gas stations, grocery stores, and the now-dwindling old-school Italian-American bakeshops. Or the thick and fluffy square pies that reflect the strong Sicilian influence in the state’s Italian neighborhoods, or even the quick and affordable Greek pizzas you can find throughout New England. While these are all solid options, I wouldn’t call any of Rhode Island’s pizzerias destination-worthy, with one exception: Providence’s legendary Al Forno.

The restaurant’s name is a bit of a misnomer, as Al Forno’s pizzas are not, in fact, baked in the oven. Instead, the thin, artfully assembled pies are cooked directly over an open fire. When I was a kid growing up in the 1980s and ‘90s, Al Forno was the hottest table in town. It was one of the first restaurants in the area that didn’t take reservations, and I remember my parents sipping California cabernet at the edge of the bar, waiting patiently for our table. While many restaurants of that era have gone the way of shoulder pads, Al Forno has endured, continuing to serve the grilled pizza that helped put it on the map. The husband-and-wife team behind the restaurant, George Germon and Johanne Killeen, are still the only Rhode Island chefs to have ever taken home a James Beard award in the Best Chef Northeast category, way back in 1993.

These days, grilled pizza is hardly surprising; but in 1980, when the two RISD-trained artists—a sculptor and a photographer—were starting out, the concept was pretty much unheard of. “We came to cooking from a completely different perspective,” says Killeen. “George got it into his head that he wanted to try grilling dough on the wood-burning grill that we had in the original kitchen. Our attitude has always been not ‘why?’ but ‘why not?’” The quick-cooking crust was a revelation—and proved to be an excellent canvas for testing innovative new flavor combinations. “I don’t think we ever really left the art world,” Killeen continues. “Our training is in every single thing that we do every single day. We brought a certain creativity to the restaurant…[we’ll never] lose that.”

In the almost 40 years since its opening, Al Forno has become renowned for its grilled pizza. Germon and Killeen even got the Italian stamp of approval at a conference in Rome. “They absolutely loved it!” laughs Killeen. “As much as I explained—in Italian—to the waiters who were passing it around that it was called pizza a la griglia—grilled pizza—they kept describing it as pizza americana. Which is funny, but kind of true. It is a uniquely American way…or Rhode Island way of cooking pizza.”

Germon passed away three years ago, but Killeen still runs the show at the restaurant most days and is working on a third Al Forno cookbook. There’s always a classic margarita on the menu, but otherwise the selection changes seasonally: nettle pesto in the spring, or sweet corn with garlicky pomodoro and red chile oil in the summer. A calamari pie, sauced with spicy arrabbiata and crowned with expertly fried squid, is also in the regular rotation, as is a recently added cacio e pepe pizza, topped with pecorino, black pepper, and mortadella.

Al Forno’s pizza is an excellent jumping-off point for home cooks, even if you don’t have a wood-burning grill (more on that later). We adapted the restaurant’s classic dough recipe to make our own seasonally driven pie, pairing sweet summer peaches and peppery wild arugula with pecorino, prosciutto, and chile oil. Master the crust using our grilled pizza primer, complete with tips from Killeen, then feel free to create your own market- and garden-inspired combinations.

Mix the Dough by Hand

Al Forno’s simple pizza dough calls for four ingredients: flour, salt, yeast, and water. While you can use a stand mixer if you prefer, it isn’t necessary here, so save yourself some cleanup and get your hands dirty instead.

At Al Forno, the kitchen team typically incorporates a small percentage of pâte fermentée, a portion of the dough from the previous day added to the mixture the next day for better flavor and extensibility. “The flavor that we achieve is through the slow fermentation of the dough,” Killeen explains. Your first batch of dough will work just fine without it, but if you do get in the habit of making this pizza often, consider upping your game by saving a few ounces of pâte fermentée to knead into the next batch. It’ll keep in the fridge for up to 3 days or in the freezer for up to 1 month.

After mixing, the dough will achieve the best flavor and extensibility if allowed to ferment slowly over several hours. Place in a well-oiled bowl and turn it over a few times to coat, then cover the bowl loosely with plastic wrap. Set aside at room temperature until it is very gassy and has nearly doubled in size. After the initial rise, punch the dough down, fold it in thirds, then lift and flip it over completely. (This step will encourage gluten development without tightening the dough, and also help mediate any differences in temperature throughout the mass of dough.)

Go Freeform with the Shape

The size and shape of your grill should dictate the size and shape of your pizza. Divide the dough into portions, then on a liberally oiled work surface, press each portion out to a nearly paper-thin layer. “Since we’re spreading it out by hand, there are slightly thicker and thinner bits,” says Killeen, “so you get this combination of textures—crispy and chewy.”

Immediately after shaping the crust, it’s time to grill. For a true Al Forno-style pie, an open fire is preferred—Killeen uses Canadian hardwood charcoal. But don’t let the lack of a grill hold you back from trying this recipe. We tested Al Forno’s dough on a well-seasoned cast-iron grill pan to great results. Just be sure to preheat the surface well and open a window or turn on the exhaust fan, as the oily dough may smoke. Further keeping the gear to a minimum, this recipe doesn’t require a pizza peel. Just “pick it up, and throw it on the grill like you would throw a sheet on the bed,” advises Killeen.

Al Forno only parcooks one side of the crust before adding the toppings. But since a grill pan doesn’t come close to the high temperature generated by a charcoal grill, which can reach over a thousand degrees Fahrenheit, we deviated from Al Forno’s method by parcooking the crust briefly on both sides. This ensures that the crust is cooked through but not tough or dry.

Brushed onto the surface of the charred dough, olive oil acts as a barrier between the wet toppings and the crispy crust, while also rapidly conducting heat from the grill or pan up to warm the toppings. “The olive oil heats up quickly on the surface, almost like a sauté pan so it bubbles and cooks the other ingredients,” says Killeen.

If you’re cooking the pizza on a grill, slide the crust to the cool part of the grill before adding the toppings; if you’re using a grill pan, turn the heat down to medium-low. This will prevent the crust from burning while you artfully arrange the ingredients.

According to Killeen, the most important thing to keep in mind with the toppings is the quantity. “Pizza with ‘the works’ is not the thing you want to do on the grill,” she says. Sauces should be applied hot and used sparingly, if at all. Oil, cheese, and other ingredients should be at room temperature and thinly sliced. Uncured meats should be cooked ahead of time, while soft herbs and tender greens should not be added at this stage.

Once the toppings have been added, return the pizza to high heat, either by using tongs to slide it back to the hot side of the grill, or by setting the grill pan over high heat. Continue cooking, rotating occasionally, until the cheese is melted and any other ingredients are warmed through, 1 to 3 minutes. Provided you have not added too much moisture with the toppings, the pizza should be easy to move around with tongs. Transfer to a platter or cutting board, top with fresh herbs or greens if desired, and serve immediately.

Al Forno in Providence, Rhode Island is known as the birthplace of grilled pizza, which the restaurant has been making since 1980. The dough is surprisingly adaptable and strikes the perfect balance between crisp and chewy on the grill or even in a stovetop grill pan. Whether you’re cooking indoors or outdoors, top your pizza sparingly, either [Neapolitan-style](https://www.saveur.com/article/Recipes/Pizza-Margherita-Tomato-Basil-and-Mozzarella-Pizza/) or with peak seasonal produce, such as the ripe summer peaches used here.
Yield: makes four 16-by-9-inch pizzas
Time: 3 hours, 40 minutes