In the Amazon, Nothing Hits the Spot Like Tacacá

This potent soup made with shrimp and wild manioc root is a street-food classic. Here are five bowls worth seeking out in the northern Brazilian city of Manaus 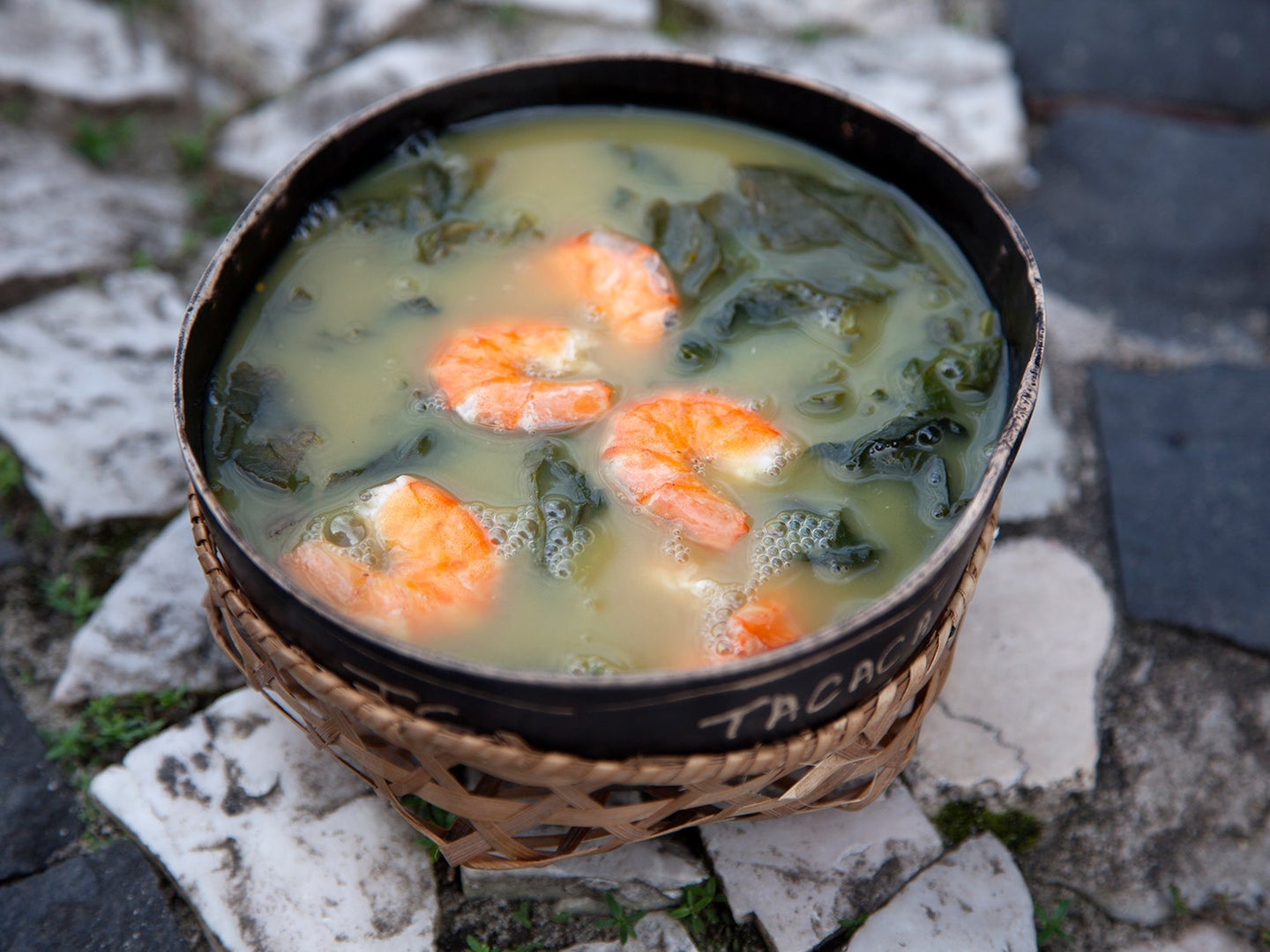 Plastered on a brick wall in Manaus, a poster for an upcoming election shows a politician posing with a bowl of tacacá. Sold by street vendors called tacacazeiras in the late afternoon, this potent soup is the Amazonian capital’s great equalizer. If you are a man or woman of the people, you eat tacacá, a dish with indigenous origins that made its way to the cities along the Amazon River in the 18th century.

For those who have not grown up eating tacacá, the first sip can be overpowering. The steaming yellow broth is a riot of flavors and sensations, from sour to salty to mouth-numbing. The base of the soup is a distinctly local ingredient: tucupi, the acidic juice of the wild manioc root. A staple of Amazonian cuisine, it’s traditionally extracted by squeezing peeled and grated manioc through a woven instrument called a tipiti. It’s also a byproduct in the production of farofa, or manioc flour. The juice is poisonous when raw and must be boiled for three to five days before it’s safe to consume. It’s then poured into recycled plastic bottles and sold at markets. Tucupi is used in a number of regional dishes, such as pato no tucupi, roasted and shredded duck served in a sauce of tucupi.

To make tacacá, cooks typically start by boiling the tucupi with plenty of salt and aromatics, such as garlic, chicory, and manjericão, a regional variety of basil. After ladling the flavorful broth that results into cuias, small bowls formed out of dried gourds, they add chile peppers in vinegar, salted shrimp, and a dollop of goma de mandioca, a gel made from hydrated manioc starch, which gives the soup its silky texture. The final touch is a few leaves of jambu, a green herb that’s native to Brazil. Also called paracress or the toothache plant, it has a tingling effect on the tongue, not unlike that created by Sichuan peppercorns.

Tacacazeiras never serve the finished soup with a spoon; just a small wooden fork or skewer to fish out the shrimp and jambu. The broth is meant to be sipped straight from the gourd, which is often nestled in a woven basket so diners don’t burn their hands.

In order to attract maximum foot traffic, most tacacá stalls in Manaus are located at busy intersections in the city center. While a few have graduated to permanent brick-and-mortar spaces, the majority are still quite rustic, outfitted with just a tarp-covered table and some plastic stools. Many of the vendors have been around for decades, feeding loyal customers every afternoon and continuing tacacá’s legacy as one of the region’s most emblematic dishes. If you’re looking to get a taste of this iconic soup in Manaus, here are the spots you shouldn’t miss.

This brick-and-mortar tacacazeira opened in 2002 in Largo São Sebastião, the plaza next to Manaus’ famed opera house Teatro Amazonas. Their recipe is standard but consistent, and as an added bonus, each bowl comes with a side of spicy sauce made with local murupi chiles and tucupi. Enough tourists also pass through here that the vendors will ask if you want your soup “sem goma“—without the slimy manioc gel.

Also known as Tacacá da Ivete, this no-frills spot a few blocks from Largo São Sebastião has been serving tacacá since 1967, making it one of (if not) the oldest street food stalls in Manaus. The owner Ivete inherited the stand—and its closely guarded tacacá recipe—from her mother-in-law. Every afternoon, you’ll find regulars leaning against the wall and sipping on the signature soup, snacking on shrimp or crab croquettes, or enjoying thick regional stews like caruru, a kind of okra-and-shrimp gumbo, and vatapá, a coconut milk-based seafood dish.

Japanese-Brazilian owners Katsumi and Kuniko Ishiba converted their vegetable stand in the crowded square of Praça do Caranguejo to this legendary tacacá stall in 1986. Slightly more expensive than other bowls around town, their soup is distinguished by two components: the handful of chopped scallions added before serving, and the large shrimp sourced from the northeastern Brazilian state of Maranhão, which is known for its seafood. The Ishibas pride themselves on the balance of their tacacá—no one ingredient dominates. Rua H, Conjunto Eldorado, Praça do Carranguejo.

Celebrity chef Felipe Schaedler is renowned throughout Brazil for promoting Amazonian cuisine. At his flagship restaurant Banzeiro, he sources ingredients from different local tribes, such as mushrooms foraged by the Yanomami or peppers grown by the Baniwa, and offers updated versions of regional classics. For his riff on tacacá, Schaedler serves a skewer of tucupi-glazed grilled shrimp over tucupi-and-jambu broth and tops it off with a jambu foam. While purists might be turned off by the cheffy touches, the quality of ingredients sets this bowl apart.

Opened in 2005, this tacacazeira now has several locations around Manaus, including one near the beach in Ponta Negra. Socorro Tapajó, the eponymous owner, brought her tacacá recipe with her when she moved to the city from Santarém, in the northeastern state of Pará. As is typical in her hometown, she seasons the soup with onions, scallions, and parsley. But the secret to her deeply flavored tacacá is the mixture of bitter and sweet tucupi in the broth. Tapajó also serves other regional dishes, including açaí na tigela, the O.G. açaí bowl, and shrimp farofa.