This Epic Meat Feast Is How Ethiopians Celebrate Easter 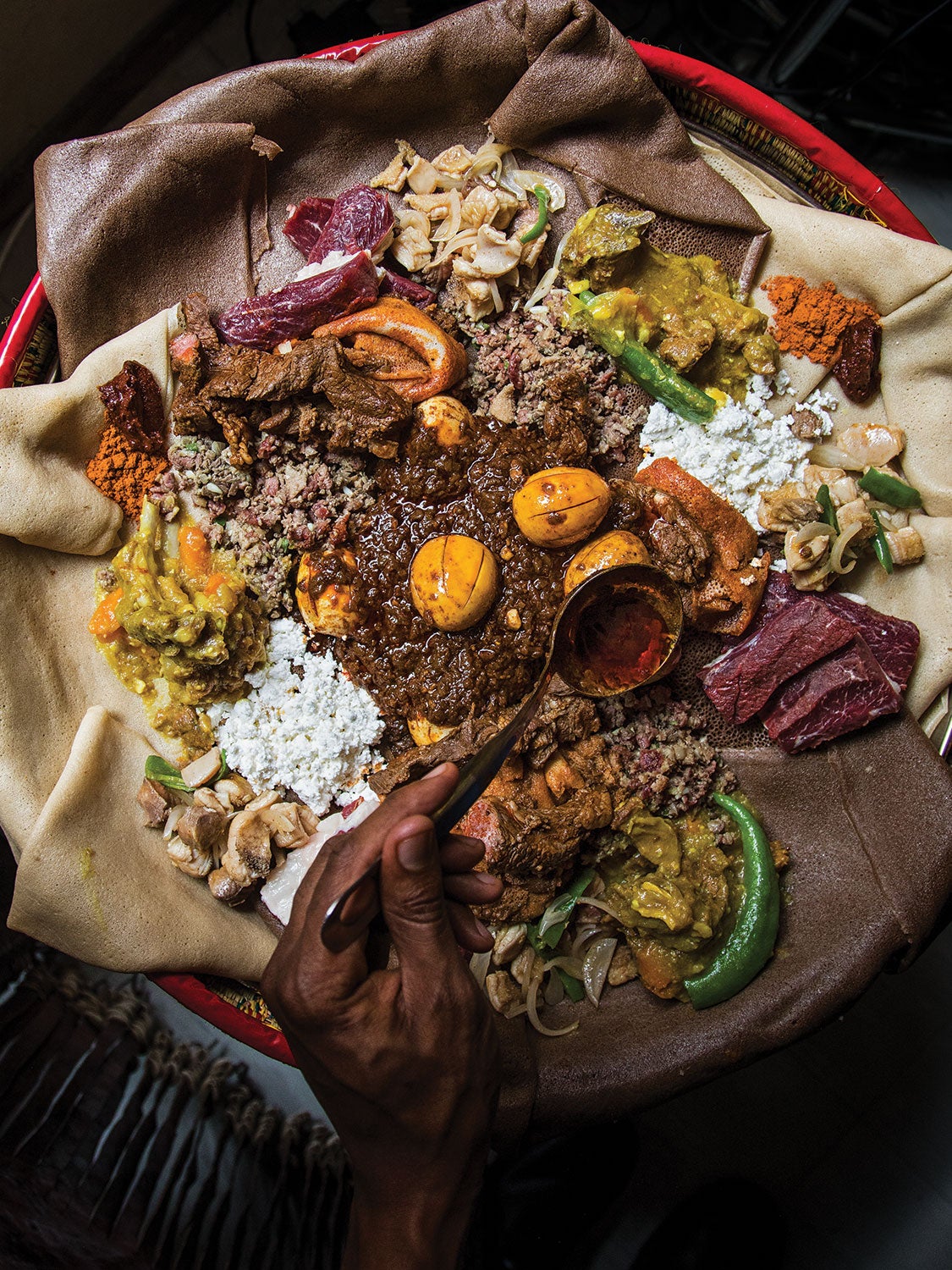 The smell of the morning’s pan-roasted coffee still lingered as a late lunch was hurried up the stairs from the kitchen in hot terra-cotta pots. On the second floor, home of the elegant and matriarchal Senait Worku, in Addis Ababa’s upscale Bole neighborhood, the dining room was set for an Easter feast, Ethiopia’s most anticipated meal of the year. Downstairs, the family kitchen doubles as a production space for their restaurant, Antica.

For Ethiopian Orthodox Christians, Easter—the most sacred of holidays—also marks the end of the year’s longest and most arduous fast. Adherents rigorously abstain from eating meat, cheese, butter, eggs, and animal fats for not only their 56 days of Lent (known as Hudadi) leading up to this holiday, but some 200 days total each year, including most Wednesdays and Fridays. Such rigorous dietary restrictions have given Ethiopian cuisine an expansive range of tsom megeb—”fasting dishes”—based on vegetables and pulses. From collard greens seasoned with ginger and garlic to earthy beet dishes, chilled lentils with homemade mustard and minced jalapeños, and more, the vivid and distinctively flavored dishes come heaped on a platter-size injera, a lightly sour flatbread.

The Easter feast, served on layers of injera Michelle Heimerman

Made from the fermented batter of teff flour, a tiny ancient grain that’s used commonly in Ethiopian and Eritrean cuisine, spongy, tart injera is cooked on a wide, round skillet like an oversize bubbly crêpe that is never flipped. It acts as an edible plate as well as a fork and spoon—­diners customarily use pieces of the bread to scoop up morsels of meat and vegetables, and also to soak up their succulent sauces. Injera is omnipresent on the Ethiopian table, but what’s served atop it changes drastically between fasting and days of breaking fast.

After nearly two months without meat, injera would be the only vegan item present at this family feast. There would be nothing to remind them of the fasting season that just finished. The most important meal of the year’s most important festivity is a celebration filled with meat.

Preparations for Easter begin the day before. At 6 p.m., families, including Senait’s, slaughter a chicken and begin cooking Easter’s reigning dish, doro wat. Twelve precisely cut pieces of chicken are stewed in a sauce laced with berbere, the ubiquitous blend of dried, deep-maroon-red chiles, garlic, onions, and a dozen or so spices such as fenugreek and cardamom. Berbere gives this dish its signature color as well as spicy tang—one that’s not tongue-witheringly hot, but rather layered with nuances of the sauce’s many components.

Senait began the dish by patiently stirring 5 pounds of finely chopped red onions for 90 minutes before adding a single other ingredient. “Many people think of doro wat as a chicken dish, but it’s really an onion one,” said ­Senait’s son, Yohanis, a charismatic 31-year-old who is also a chef, cookbook author, and presenter on a popu­lar culinary travel TV program in the country.

At midnight, with the doro wat off the burner, the faithful went to church, staying up most of the night and returning home to eagerly break the fast at 3 a.m. ­Senait’s husband, Gebreyesus, cut a cross into a thick loaf of difo dabo, a nigella-flecked wheat bread baked in banana leaves, then broke off pieces for the family. They sampled the doro wat but, because it is meant to be the central dish for Easter lunch, had little more than a taste.

At dawn, after just a few hours of sleep, they woke to slaughter a lamb, kicking off what Yohanis called “a day of butchering and feasting.” While butchers do a roaring trade in the region, many families will handle the killing and butchering themselves for special occasions. The feasting began almost immediately with a breakfast of dulet, finely chopped raw stomach, liver, and some sirloin from the freshly butchered animal.

Cuts from the lamb made their way to the kitchen and into pots as the morning passed in cooking—​­chatting, too, as friends stopped by to visit. For guests, there was coffee with thick slices of difo dabo and also murky-golden-hued tej, fermented honey wine that Gebreyesus poured out of small beaker-shaped bottles.

Just before three o’clock that afternoon, the parade of heavy pots began from the kitchen. The restaurant Antica was still open, its kitchen burners sharing the family’s dishes with the restaurant’s orders.

Senait’s daughter Mardet, a hip, 20-something architect, set a wide wicker basket lined with overlapping sheets of injera in the center of the table. Senait began ladling dishes directly onto the injera. She placed the doro wat—into which she had slipped a dozen peeled and burgundy-colored hardboiled eggs, representing the apostles—at the very center. The onions had nearly dissolved to give the sauce a ragged texture, and the flavors had softened but kept their acidity.

Around the doro wat in colorful piles she heaped tibs, small pieces of beef cooked in niter kibbeh (a clarified and spiced butter) with plenty of onions and jalapeños; kikil, a lusty goat stew with garlic, ginger, and turmeric; and a spicy lamb stew glistening red from berbere. There was a fiery, very lightly sautéed dish of beef tongue and tripe, and some fully raw dulet from the morning. Raw meat, such as ox or goat, is a hallmark of festive meals in Ethiopia, and Yohanis arranged generous hunks of marbled tenderloin decoratively on the platter.

Without rushing, the four ate, tearing off pieces of delicate injera with their fingertips and picking up tidbits of stew. The only utensil on the table was a sharp knife, used for cutting pieces of the raw tenderloin. They dipped the pieces into mitmita, an eye-watering ground-spice blend that typically contains a base of dried bird’s-eye chiles, or awaze, a thick sauce made from mixing berbere with tej. Conversation flitted from a building project that Mardet is working on to an upcoming episode Yohanis was shooting in an isolated region of the country.

As soon as the family finished eating, they set down a small round brazier of hot coals on the living room floor. Sitting on a low stool, Senait began pan-roasting green coffee beans in a small skillet over the embers.

The mood was relaxed. Conversation quieted with the shush-shush of shaking beans as the elaborate and ceremonial process for preparing coffee was underway. All attention was drawn to Senait’s hypnotic movements. Frankincense burned in a small dish nearby, its aroma and smoke mingling with those of the gradually darkening coffee beans.

Once the beans had reached a deep, dark-brown roast, ­Senait made a loop through the room with the pan to offer everyone a chance to appreciate the aroma. Late-​­afternoon light streamed through the skylight and illuminated the blue smoke that had gathered at the ceiling.

After grinding the coffee beans—a process typically done by hand—Senait funneled the grounds down the neck of a large, bulbous terra-cotta pot called a jebena, which she placed on the brazier to brew. When the pot gurgled, she removed it from the brazier and allowed the grounds to settle before pouring the coffee into small, handleless demitasses in a single, fluid motion. Nearly as thick as espresso, the hot coffee went down in a couple of loud slurps. There was no dessert—there isn’t even a name for it in Amharic. The cuisine is virtually free of sweets. Instead, with the coffee came popcorn, popped kernels of pearl barley, and more difo dabo.

People would be in and out all afternoon and evening. “It doesn’t really stop,” Yohanis said, as his mother added water to the jebena for the second of three rounds of coffee. “Eating, cooking, talking.”

In a few hours, before appetites had fully recovered, the pots of stew would be reheated and there’d be another meat-laden meal for whoever was hungry.