A New Cookbook Finally Gives Armenian Food Its Due

Lavash puts the spotlight on this nuanced and satisfying cuisine with a complicated history. 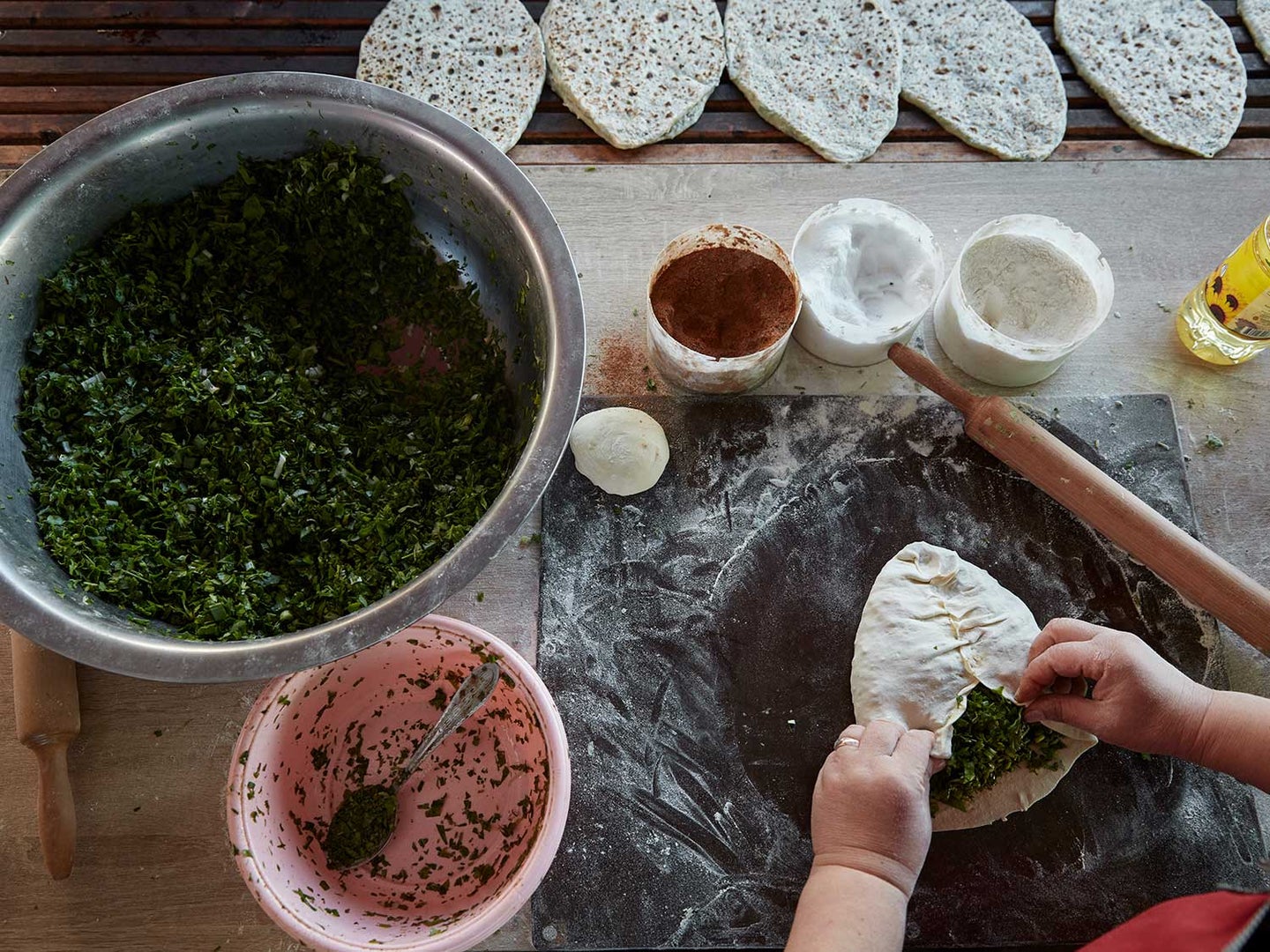 Jingalov hats—flatbreads filled with greens and herbs—are among the authors’ favorite recipes to cook for guests. John Lee
SHARE

As a Saveur reader, you’ve probably patted spiced lamb into Turkish-style kofte and tempted fate unmolding a saffrony Persian tahdig. Maybe you’ve dabbled in Georgian khachapuri or developed a predilection for real-deal Russian blini. In other words, you dig the food of Armenia’s neighbors. But how many Armenian recipes are in your repertoire? If you can’t tell your khash from your khorovats, we have good news: Lavash (Chronicle Books, 2019), this month’s pick for Saveur Cookbook Club, is the Armenian cuisine primer you’ve been waiting for.

Lavash, published in October, is a joint effort by writers and recipe developers Kate Leahy and Ara Zada, and photographer John Lee. (If Leahy’s name sounds familiar, that’s because she authored Burma Superstar, Cookie Love, and other popular titles.) All three food-industry pros had been blown away by Armenian cuisine at some point or another—Leahy via a college thesis on Armenian diaspora foodways, Zada through his Egyptian-Armenian roots, and Lee by way of a food photography workshop he taught in Armenia at the TUMO Center—and wondered why so many of the cuisine’s thrilling dishes weren’t better known. Realizing there was no Armenian cookbook on the market by a major company, they found each other and got to work on this gorgeously shot and meticulously researched cookbook.

So just what exactly is Armenian cuisine?

In contrast to, say, Georgian or Russian cuisine, Armenian food is impossible to sum up in a few key flavors or signature dishes. Complicated geopolitcs, countless migrations, and, most recently, the Armenian Genocide (1914 to 1923)—in which the Ottomans killed some 1.5 million Armenians—have all contributed to the splintering of Armenian culinary traditions. Dishes that grace, say, Armenian-American tables in Los Angeles, such as manti (tiny lamb-stuffed dumplings) and choreg (a sweet bread flavored with aromatic cherry kernels called mahleb), are virtually unrecognizable in Armenia today, where Soviet influences (e.g., mayonnaise-y salads, sour cream, pickles) are acutely present.

Faced with the impossible task of defining what Armenian food is (and is not), Leahy, Zada, and Lee took a step back and moved the goalposts. Instead of penning the be-all-end-all bible of Armenian cuisine, they would fly to Armenia to learn how people cook in the mother country. The book would be a snapshot of the culinary zeitgeist of a nation reinventing itself after the peaceful Velvet Revolution of 2018, which upended a Russian-backed oligarchy and installed the Western-leaning journalist-cum-politician Nikol Pashinyan as prime minister.

With Armenia looming large on “Places to Travel in 2020” roundups, there’s no better time than now to get the skinny on the nation’s food and its untapped potential. To that end, we sat down with Leahy and Zada to ask about their favorite dishes and to hear more about what they learned while collecting recipes.

BK: Let’s address the elephant in the room. Does real-deal lavash have anything to do with the seeded crackers of my suburban American youth?

Ara Zada: It actually might, but let’s backtrack. Lavash in Armenia is a flatbread cooked on the wall of a tonir, or clay oven. It is at every table at every meal. It’s soft and slightly sour from a bit of so-called “old dough” (ttkhmor). In the winter, when it’s too cold to go outside to light up the tonir, families rely on dried lavash, which they’ll spritz with water and wrap in a towel to rehydrate—and, bam, you have your soft lavash back. So maybe this crunchy lavash has its roots in that tradition.

BK: Tell me more about this “old dough” method and about how lavash is made.

Kate Leahy: In the villages, bakers will always hold back one piece of dough to mix into the next batch. The direct translation of ttkhmor is “sour dough,” so you get the idea. We approximate this method with a pre-ferment of flour, water, and a pinch of yeast. When old dough is not used, it’s the missing link—you really need it to give the lavash its flavor and texture. Those little blisters on good lavash? That’s the ttkhmor at work.

Real lavash is made with a chunk of old dough—literally, it’s dough that was held back from a prior batch—known as ttkhmor, the direct translation of which is “sour dough.” This gives the flatbread its flavor and texture. Those little tiny blisters you see here? That’s the ttkhmor at work. John Lee

To make lavash, you mix the old dough with water, flour, salt, and a little oil. You let that rise and portion it into balls, which actually keep in the fridge for several days. After the second rise, you roll out each ball into a thin oblong shape. In Armenia this is where the tonir would come in, but we replicate that ancient baking method with an overturned wok. A cast-iron griddle also works, though not quite as well. At first it can be tricky to roll out the dough and get familiar with your heat source, but don’t worry, you’ll get the hang of it. The first lavash in a fresh batch is never pretty.

AZ: In Armenia, they say that the first lavash is like your first love—it goes in too hot and burns out quickly.

BK: Say I want to impress some guests. What dishes in the book are the biggest show-stoppers?

KL: For me it’s got to be jingalov hats. These flatbreads are filled to the brim with fresh herbs and greens, and I’m convinced they’re the breakout star of the book. They’re beautiful and vegan and a great way to eat a lot of greens. And they’re forgiving: You don’t have to scour the ends of the earth for obscure Armenian plants—fresh herbs, chard, and scallions, and you’re good to go!

AZ: Hands-down, ghapama. It’s a whole pumpkin stuffed with rice, dried fruit, nuts, and honey. You slice it down the side and it sort of spiders open. It’s sweet and savory and a great cold-weather dish.

BK: What about weeknight fare?

AZ: I keep going back to trout wrapped in lavash. It’s like making fish en papillote, and you can even use store-bought lavash with success. You just stuff the fish with butter and tarragon or pretty much any herbs you have on hand, roll it up in lavash, blast it in a hot oven for 15 minutes, and it’s done. The fish is perfectly steamed when it’s finished, and you can soak up the juices with the crusty bread. I eat the whole thing with my hands.

Then there’s panrkhash. To make it you tear up some old lavash, layer it with some cheese and caramelized onions and water, and bake it. It’s basically Armenian mac ‘n cheese. I make it for friends after football games. Just throw out some forks and let everybody dig in. And yeah, we add hot sauce because it’s L.A.

BK: How did you go about collecting recipes?

KL: At first I was a little stressed, like, how are we going to get all these recipes? But Ara told me not to worry because in Armenia the hospitality is second to none. He was right. We’d walk into a bakery and they’d just hand over whatever recipe we needed. In Goris, a town in southern Armenia, for instance, we were put in touch with a grandmother who was happy to show us how to cook a bunch of dishes as long as we paid for the ingredients. Goris is famous for its beans, and she made beans some 10 different ways in her tiny apartment. It was incredible. The fried bean lavash triangles in the book [p. 117 in the book; filled with mashed beans and fresh herbs] are her recipe.

Making basturma (on the left) is not necessarily a simple task, but it is easier than most cured beef projects. It’ll take about two weeks to complete, but the results are undeniably tasty. Snack on the final product with a glass of wine, or slice it up into an omelette and wrap in lavash for the Armenian equivalent of a breakfast burrito. John Lee

KL: It’s definitely in flux. You have lots of Western Armenian dishes making inroads in cities like Yerevan because there are Syrian Armenians relocating there for obvious reasons. Lahmajo, a meat-topped flatbread, is one such recipe. But there are plenty of historical recipes that haven’t changed in millennia—harissa, for example. In Armenia, harissa has nothing to do with the pepper paste; it’s probably the original medieval porridge and has just four ingredients: chicken, wheat berries, water, salt.

BK: Why do you think people should add a trip to Armenia to their bucket lists?

AZ: If you like wildlife, culture, scenery, and history, and someplace that’s super affordable—we’re talking $40 for the fanciest soup-to-nuts meal—then Armenia is for you. Food-wise, everything is sourced from right around you, even in cities. Bread is made in the bakery next door, trout is naturally farmed in ponds out back, and pickles and preserves are often homemade.

KL: Going to Armenia today is like stepping back in time and going to Italy 70 years ago. You can have a really authentic travel experience in which you feel like you’re getting tons of culture without dodging selfie sticks. It’s rapidly changing, so now is the time to go.

Lavash is the February 2020 pick for Saveur’s Cookbook Club. Head over to our Facebook group or follow #saveurcookbookclub on social media to join in the fun—or just follow along!