“After leaving a roadside cheese store, you can suck on a single small cube of aged cheddar like a lozenge, the flavor trailing out for miles.” It’s for lines like this that I love reading Amy Thielen’s The New Midwestern Table not just for its recipes, but also for its writing. And for the cheese.

In her James Beard Award-winning tome of Midwestern cooking, Thielen paints a deliciously pungent portrait of the Midwest as a premier destination for fromage lovers—and this turophile is aching for a road trip through Wisconsin’s cheese-tasting rooms along I-80 and I-90 (as recommended to me by the author). Until then, I’ll opt for the next best thing: Thielen’s old-fashioned pounded cheese with walnuts and port syrup.

Unfortunately, I couldn’t find a cheese that old in my neighborhood and had to substitute whatever name-brand cheddar was available at my corner bodega. I chunked up the cheese and dropped it into my food processor, along with some Dijon mustard, black pepper, and way more than the pinch of cayenne that Thielen calls for (my hand slipped, which I would later discover was a very happy mistake). The final ingredient, perhaps the most important one other than the cheese, was the “cool but not cold” butter. “It should have the consistency of putty, not rock-hard but firmer than mayonnaise,” Thielen advised.

The temperature of the butter is important, as it helps the cheddar blend smoothly and not separate in the food processor. My beurre sat out at room temperature for about 10 minutes while I prepared the port syrup, which was just a matter of simmering ruby port with a little brown sugar until viscous. Of this sweet, winey mixture, Thielen says it should be the consistency of maple syrup (just know that it will continue to thicken as it cools). Once I plated my pounded cheese, I topped it with toasted walnuts, then drizzled the whole thing with my shiny port reduction, watching the syrup drip down the sides, slowly, like boiled candy. At Thielen’s suggestion that this spread is best served with crackers, I tumbled onto my plate a generous helping of Wheat Thins (the best cracker, in my book), poured myself a glass of red wine, and dug in.

As Thielen said of fudgy aged cheddar: Unbelievable. Her DIY port wine cheese is a gorgeous marriage that exists somewhere between Cheez Whiz (in the best way) and, I don’t know, something much fancier. The sticky, raisiny port syrup tasted of concentrated concord grape juice and worked beautifully against the salty-sharp, spicy pounded cheese. I polished off a good cup and a half of it on my own for dinner that night, happily.

The thing is, I’d never even heard of pounded cheese before this cookbook, and neither had any of my Midwestern friends. There aren’t many documents of it on the internet. When you Google “pounded cheese,” Thielen’s recipe is the one that comes up predominantly across multiple search results. There may be a reason for this: It’s typically only referred to as such in much older cookbooks.

In The Cook’s Oracle (1817), for instance, William Kitchiner, M.D., instructs: “Cut a pound of good mellow Chedder [sic], Cheshire, or North Wiltshire cheese into thin bits; add to it two, and if the cheese is dry, three ounces of fresh butter; pound, and rub them well together in a mortar till it is quite smooth.” My favorite bit is the addendum: “When cheese is dry, and for those whose digestion is feeble, this is the best way of eating it.” For added “piquance,” curry powder, mustard, and cayenne are suggested additions, along with sherry for moisture. Alternatively, this practice of smashing butter into cheese can be seen with strong Roqueforts that need to be toned down. “It’s a little trick the French play to bring foods into balance,” cookbook author Dorie Greenspan writes on her blog, “and it works.”

In Ethel Meyer’s recipe for “CHEESE (Pounded)” in 1200 Traditional English Recipes (1898), the method is similar, calling for “a very clean mortar.” But Meyer says to pound six ounces of cheese and two ounces of butter (a much higher butter-to-cheese proportion than Kitchiner’s) “to a smooth paste.” She calls for cayenne, as well—not as a suggestion, but as a third main ingredient. I love this, because though I accidentally added more than a pinch of cayenne to my cheese, the elevated heat was precisely what made each bite so wonderfully compelling.

When I sent a picture of my pounded cheese to my friend Brett Berghauer, a Wisconsin native, he wrote back: “Port wine cheese spread!”

As I would later learn, contemporary recipes for pounded cheese are called “cheese spread.” The Joy of Cooking, for example, has a very similar recipe under the heading “CHEESE SPREADS FOR TOASTED SANDWICHES OR CHEESE DREAMS.” (Note to self: Look up “cheese dreams.”) But in place of the mortar and pestle, aka the pounding, Irma S. Rombauer calls for stirring “to a smooth paste” or blending “in the electric blender.” More than anything, then, the dish’s title seems to refer to the appliance one uses to combine the cheese and butter. Over the years, as the method for making this foodstuff (formerly known as “pounded cheese”) has changed, thus has its nomenclature.

Beyond the blender, one thing that hasn’t changed is the list of ingredients. Rombauer’s recipe is more or less the same as Kitchiner’s and Meyer’s, and even Thielen’s: It, too, calls for cheese (but soft and shredded), cayenne (this seems to be notable across all the recipes), mustard (“prepared,” meaning not powdered), and cream or soft butter. 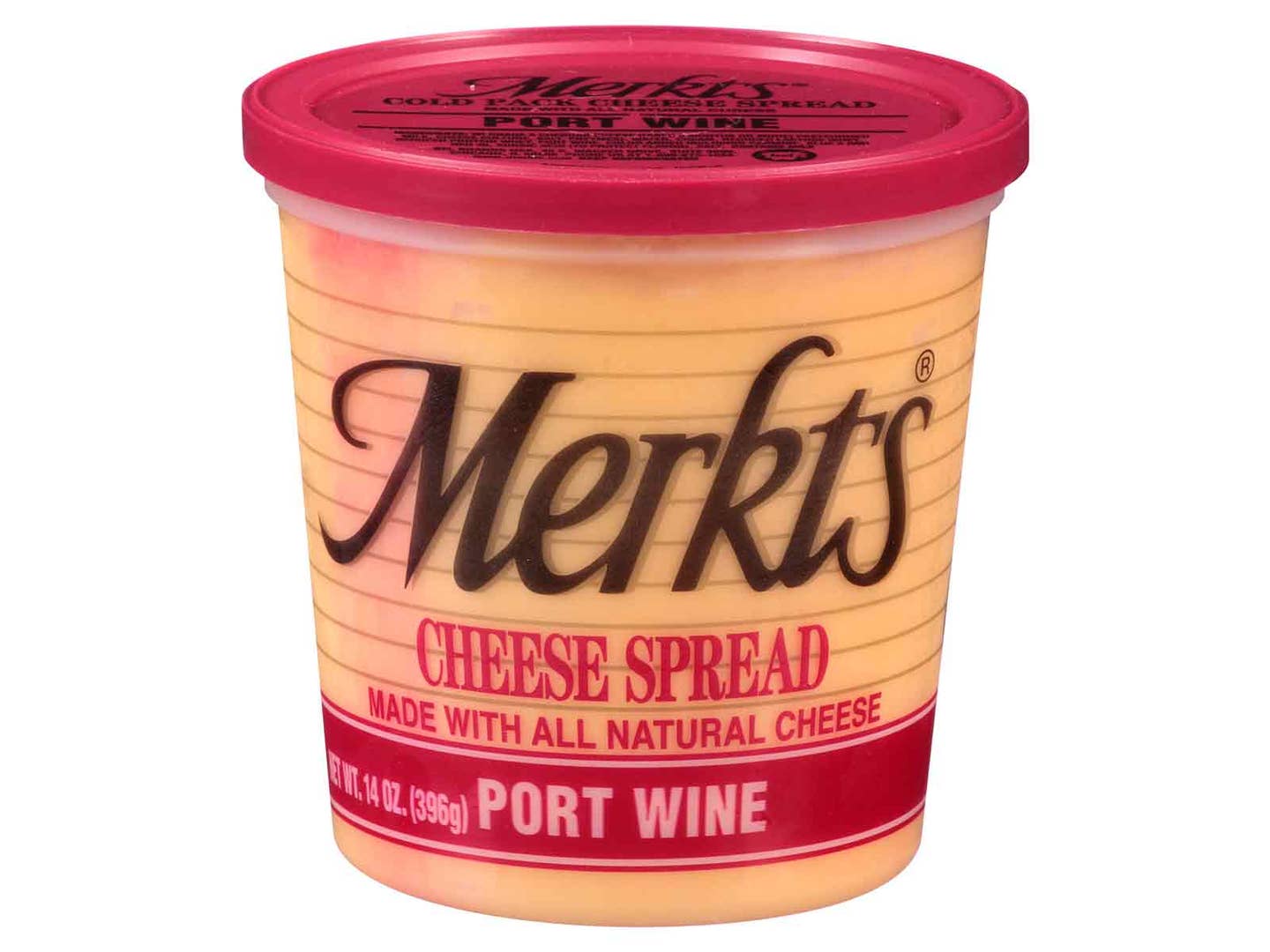 As Berghauer and I chatted more about Midwestern cheese spreads, he recalled a certain store-bought product that has, unequivocally, a grand-ambassadorial cult following in the Midwest: Merkts Port Wine Cheese Spread. “Merkts was something older people always brought to picnics, potlucks, everything,” he told me. Later, my field research (via surveys of my Twitter and Instagram followers) would corroborate this very sentiment:

I noticed a pattern: “my mom,” “my dad,” “my parents,” “my nana,” “grownups.” I loved reading everyone’s intimate stories about this spread, because in their quotes I found memories of these individuals not as adults eating the stuff now, but rather as kids witnessing the adults in their lives centering life’s biggest celebrations around the hot pink and orange plastic tubs. It all sounded so fabulous, and made me nostalgic for a past that was never even mine. In regards to fabulousness, Kat Kinsman may have said it best in her ode to port wine cheese in Food & Wine last year: “We all grow up with different metrics for fanciness ... If cheese was fancy, and wine was fancy, what could be more sophisticated than a melding of them, especially if it was spread generously across a Ritz?”

And therein lies the one point of disjuncture in my crowdsourcing of personal histories on social media: Everyone eats port wine cheese with a different cracker. “Triscuits,” one reader wrote. “Sesame water crackers,” said another. “Rye chips,” claimed a third. Berghauer told me it’s especially good with salty hard pretzels. Whatever you choose to eat it with, or call it for that matter (cheese spread or pounded cheese), I can guarantee you this: Make it for dinner once—for yourself as I did or as a starter before a larger meal—and its fudgy, salty-sweet savor will trail out for miles.