I’m pretty sure that mustard gets more use than any other condiment in the Test Kitchen. That’s saying a lot when you consider the number of options we have to chose from: four refrigerator shelves and a sweeping pantry packed, shoulder-to-shoulder, with every obscure paste, potion, sauce, and seasoning we could ever need. But mustard is special, and popular everywhere on Earth it lands.

As a member of the Brassicacae family (which also includes pungent green vegetables like cabbage, cress, and broccoli), mustard is a low maintenance crop that thrives in a broad range of climates. The earliest evidence of mustard cultivation can be traced back to 4000-BCE China, and millennia of human migration, agriculture and imperialism have scattered mustard seeds across the planet. The Romans introduced the easy-growing seeds to many of their conquered territories and as a result, different varieties of mustard grow today, wild and cultivated, across North Africa, continental Europe, and the British Isles.

While wild strains of mustard already existed in the Western hemisphere and were used in native cooking, mustard seed was not a common crop for early European settlers. When Thomas Jefferson returned from France at the end of the 18th century, he brought with him a taste for the French-style condiment and planted mustard seeds on his Virginia plantation. Today, Canada exports more mustard seed than any other country (mostly to France, the United States, and Japan) and coming in a close second is the tiny mountain country of Nepal* which supplies a large portion of India’s demand.

We’ve featured some of the Test Kitchen’s house favorites below. The selection barely scratches the surface of all the options out there, but it’s a strong start for the modern pantry.

Essential Mustards to Know and Love 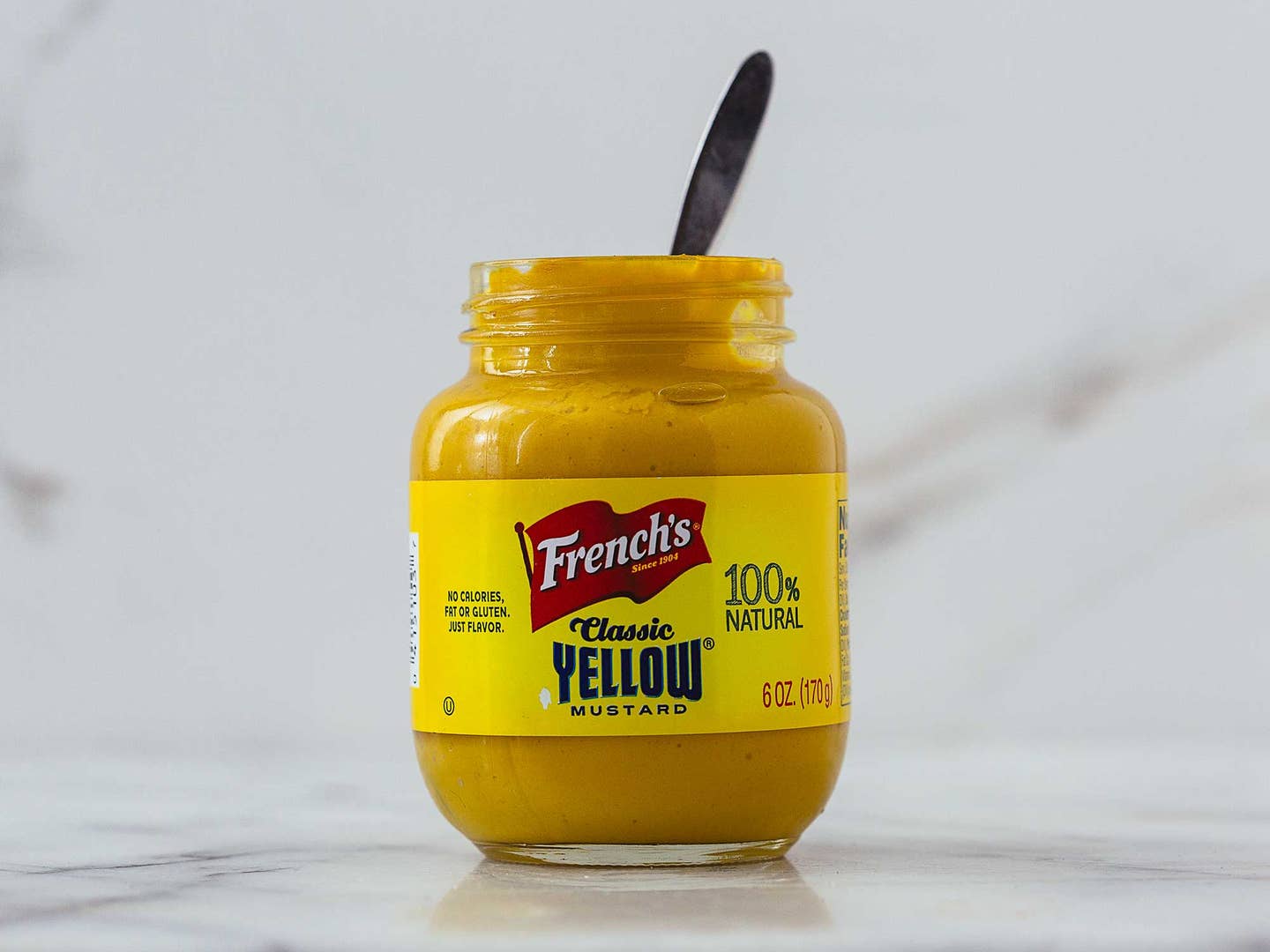 Let's get the obvious one out of the way, shall we? Michele Anna Jordan wrote in The Good Cook's Book of Mustard that "... a hot dog on the street in New York City, San Francisco, Santa Rosa, anywhere at all, should be topped with any humble ballpark mustard, sharp and bright and perfectly suited to its purpose."

We catch what Michele is going for, but we will stick with the tried and true brand. Until recently, the North American palate has been by and large fearful of picante foods. At the turn of the 20th century, R.T. French, the “largest manufacturer of mustard in western New York State” sought to grow their sluggish business by producing a bright and flavorful mustard with none of the heat of European preparations.

Labeled "French's Cream Salad Brand," the new condiment's instant success permanently changed the American table. French's topped a million dollars in sales in 1915, and in 1926 the family-run company decided to cash out to the English mustard giant Coleman's. Today's popular yellow potion is still bright with white vinegar and lots turmeric powder, along with some added flavorings and sweeteners that appeal to our national sugar addiction. French's is basic in the very best way: consistent, nostalgic, and great on greasy hotdogs and burgers. We also love Adam Perry Lang's technique of using it to tenderize and adhere spice rubs to grilled or roasted pork. 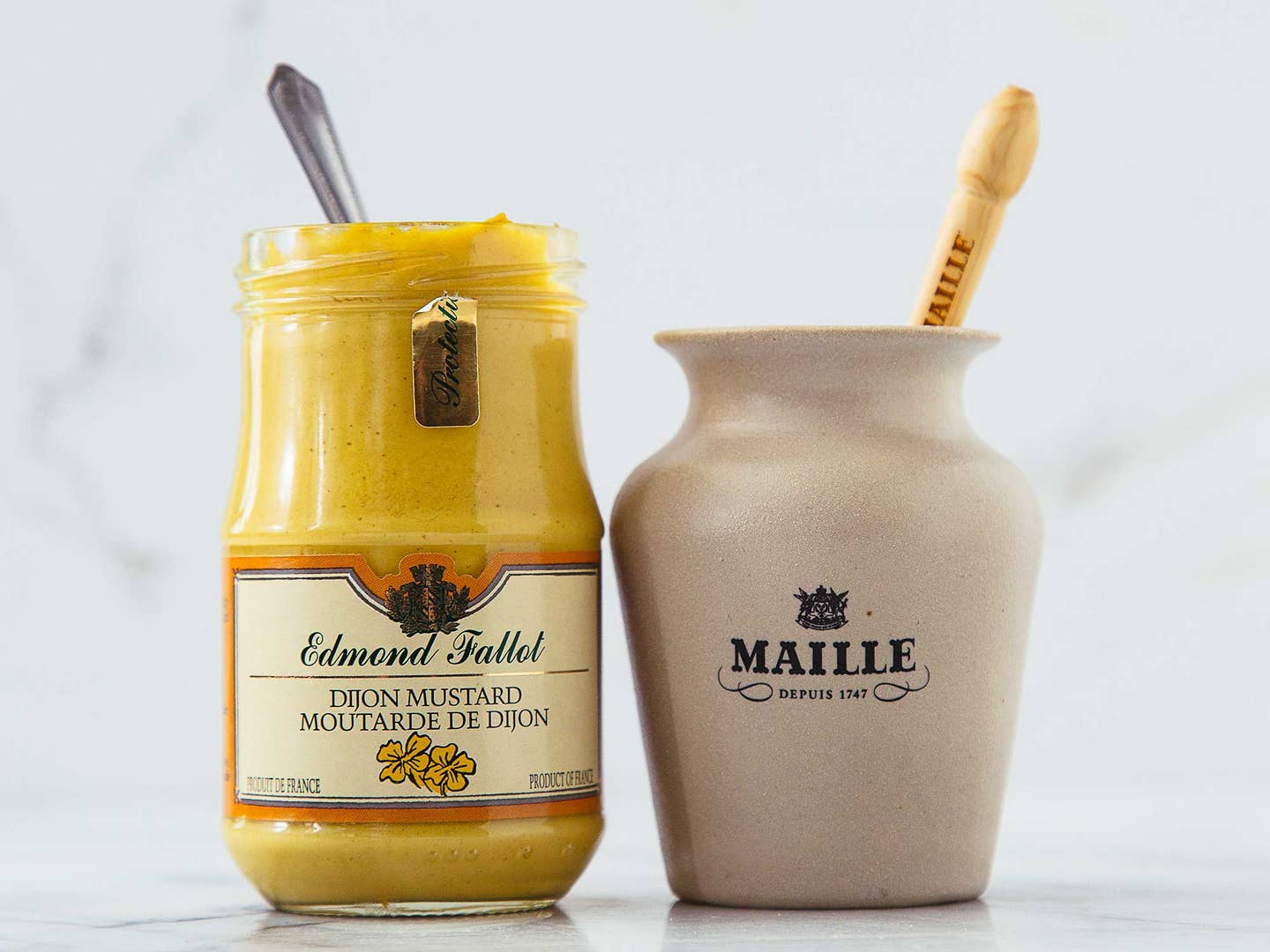 This old lion brand supplied mustard to the courts of 18th century France, Austria, and Hungary, and the old French label was the favorite of King Louis XV and Madame de Pompadour. In spite of centuries of mergers and staggering growth, Maille still produces one of our favorite Dijon-style mustards. You can find pre-packed jars in most good grocery stores, while the company’s boutiques offer a number of classic and flavored mustards on tap for maximum freshness.

If you don't live near one of their shops, their mustards "from the pump," packed in beautiful stoneware crocks, are also available online. With a silky smooth, almost whipped texture and moderate heat, we love the original Dijon with white wine.

Edmond Fallot's sharp mustardy bite has earned it the prestige of being Thomas Keller's favorite brand. The classic Dijon and slightly hotter Burgundy version are pantry staples, and this grainy walnut version is a dream with pork, rabbit, or duck rillettes.

This extra-coarse mustard from the birthplace of Brie is nutty and tart with a dry, grainy texture and very little heat. The local monastery produced an early recipe as far back as the 17th century, and the Pommery family took over manufacturing in 1760.

The favored mustard of culinary philosopher Brillat-Savarin, this mellow (if pricey) mixture is no simple sandwich spread; swirl a spoonful into cream sauce or use it in a vinaigrette over warm haricots verts. With its lovely classic packaging, Moutarde de Meaux makes a charming gift for serious home cooks. 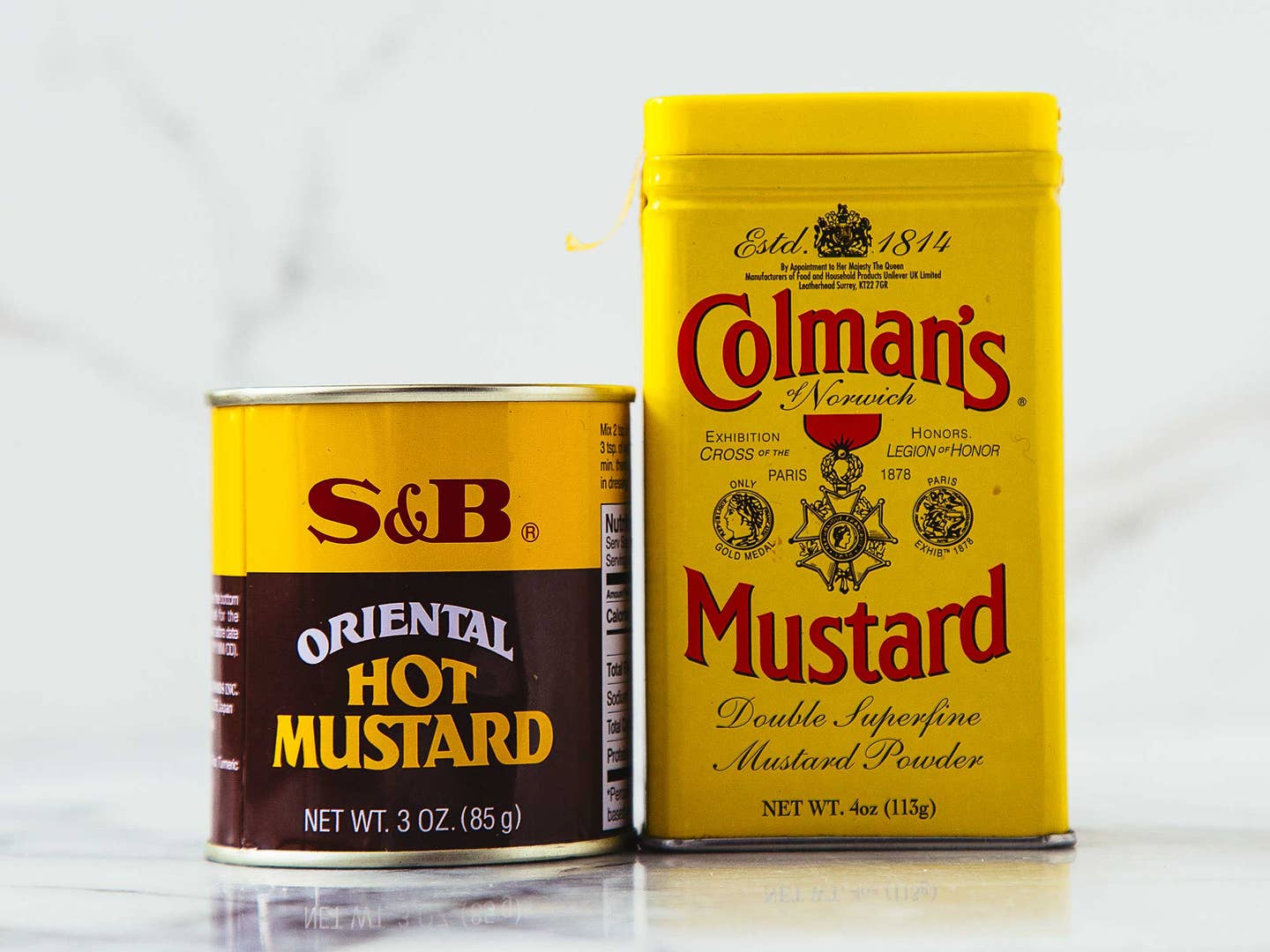 While most of today’s mustard-eating countries sell and consume prepared mustard pastes in varying fineness of grind, mustard also comes in a dry powdered form. Heat and strong acid denature the enzymes that cause mustard’s “hot” sensation, so for the most intense mustardy burn, mix the powder with an equal part of cold water. Let the mixture rest for a few minutes to develop its full flavor before serving with roasted meat, on sandwiches, or stirred into mayonnaise as a dip or dressing.

Our favorite powdered mustards are the English giant Colman’s and S&B Oriental Hot Mustard from Japan. Like any other ground spice, these lose potency over time. Both brands are inexpensive; discard and replace six months after opening.

Karashi, such as the S&B Prepared Hot Mustard or House Brand Neri Karashi, is the only packaged prepared mustard we've come across that is not tempered by an acidic component. Consequently, these two karashi have the most intense mustardy heat of any of the prepared pastes we tasted. S&B's version was the clear favorite, with a mellow, savory hit of umami and a front-of-mouth tingle that suggests a touch of Sichuan peppercorn. Try it with tonkatsu, natto, or oden. 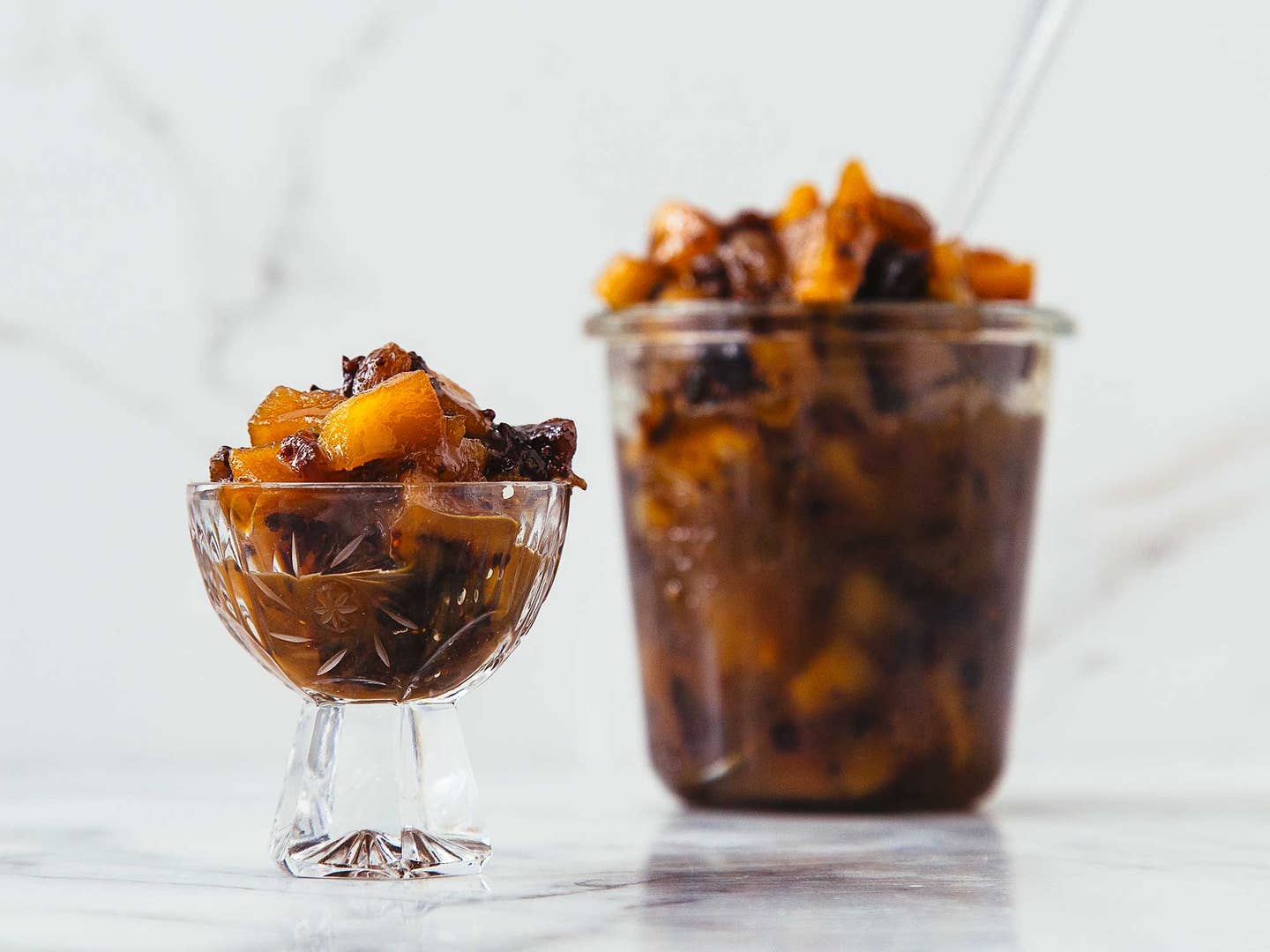 Italians love this sweet and spicy fruit condiment, spooning it over pungent cheese and boiled meats, or, in the case of Mostarda di Venezia, swirled into bowls of mascarpone for dessert. Try this classic fig version, or make your own winter fruit relish using Tamar Adler's easy recipe, which includes both prepared Dijon mustard and whole brown mustard seeds. 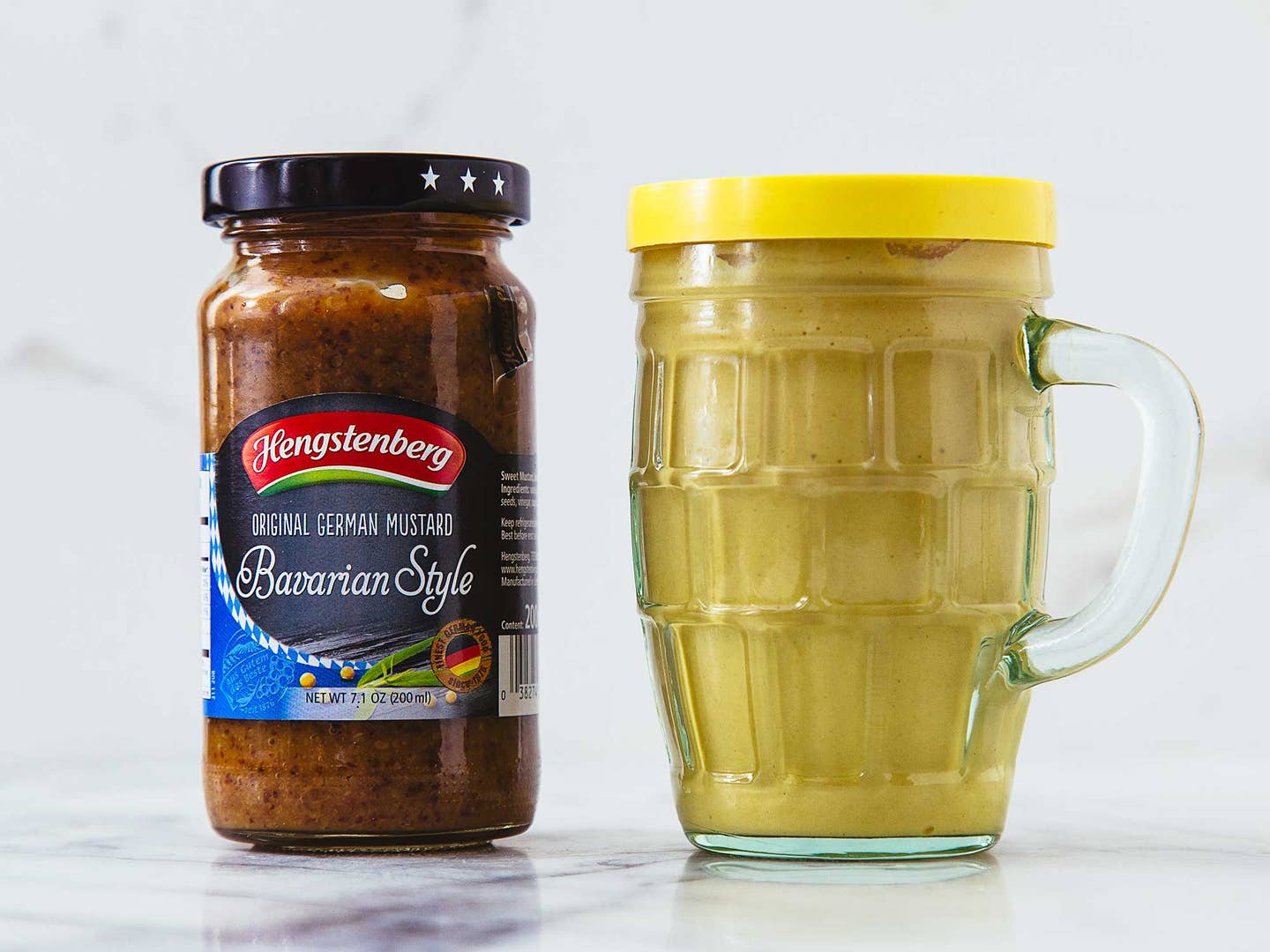 Traditional German mustard falls into two main categories: Dusseldorf style is savory, tart and strong, similar to Dijon but typically with less aggressive heat, while Bavarian mustards are mild and generously sweetened with sugar or honey. We like the smooth Dusseldorf-style Alstertor on baked ham while sweet and smoky Handlemaier’s is perfect on weisswurst or even breakfast links. 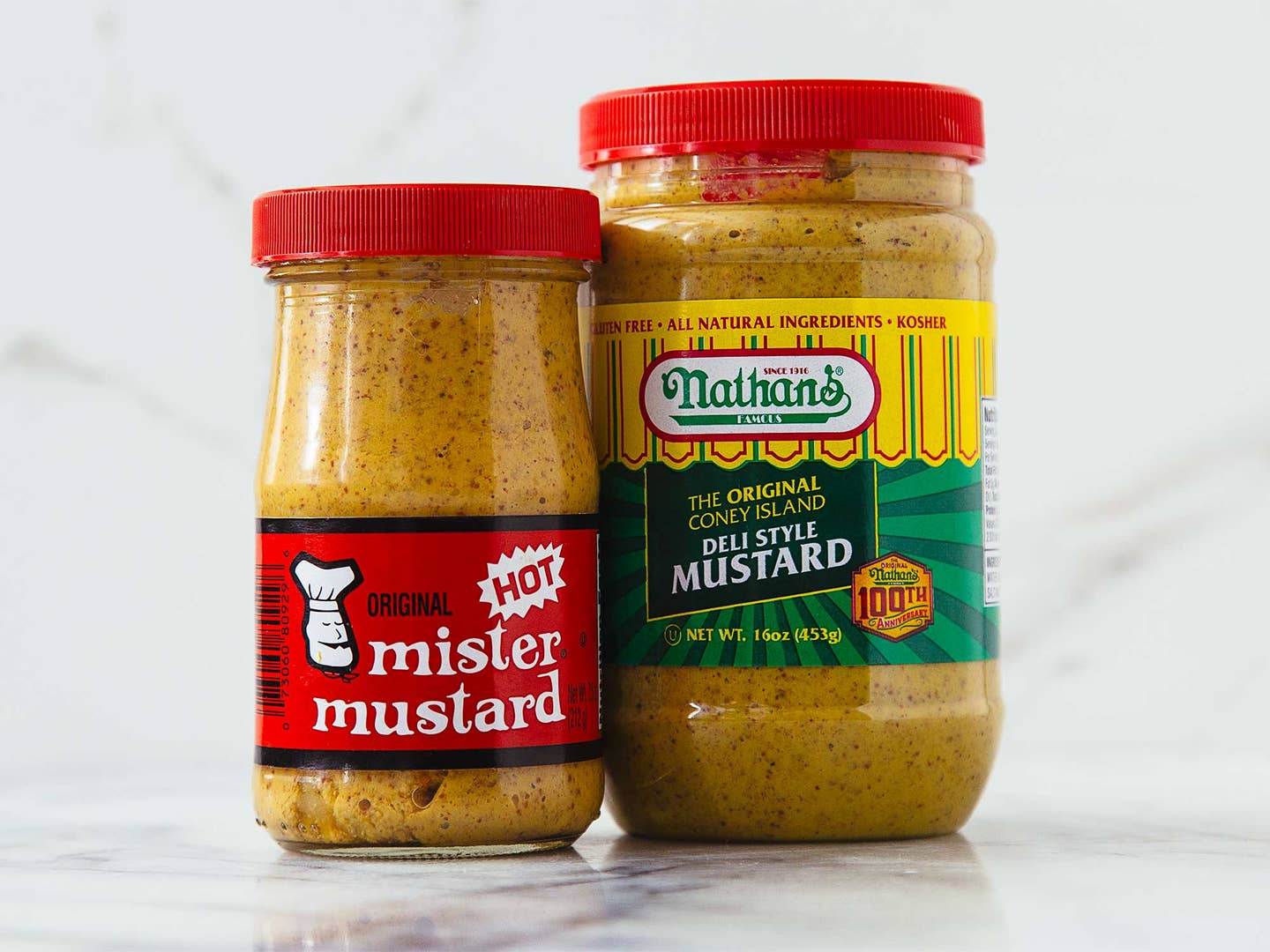 American deli mustards are most popular in parts of the country with thriving Jewish and German communities like New York and the Midwest. Vinegary and accessible, but with more spice and texture than the the yellow ballpark stuff, they're perfect smeared over brats or pastrami. Nathan's makes our favorite mild version, but if you prefer a deli mustard with some serious heat, look for Mister Mustard's Original Hot flavor. It packs a punch and finishes with deep savory notes at a bewilderingly cheap $1.60 a jar. 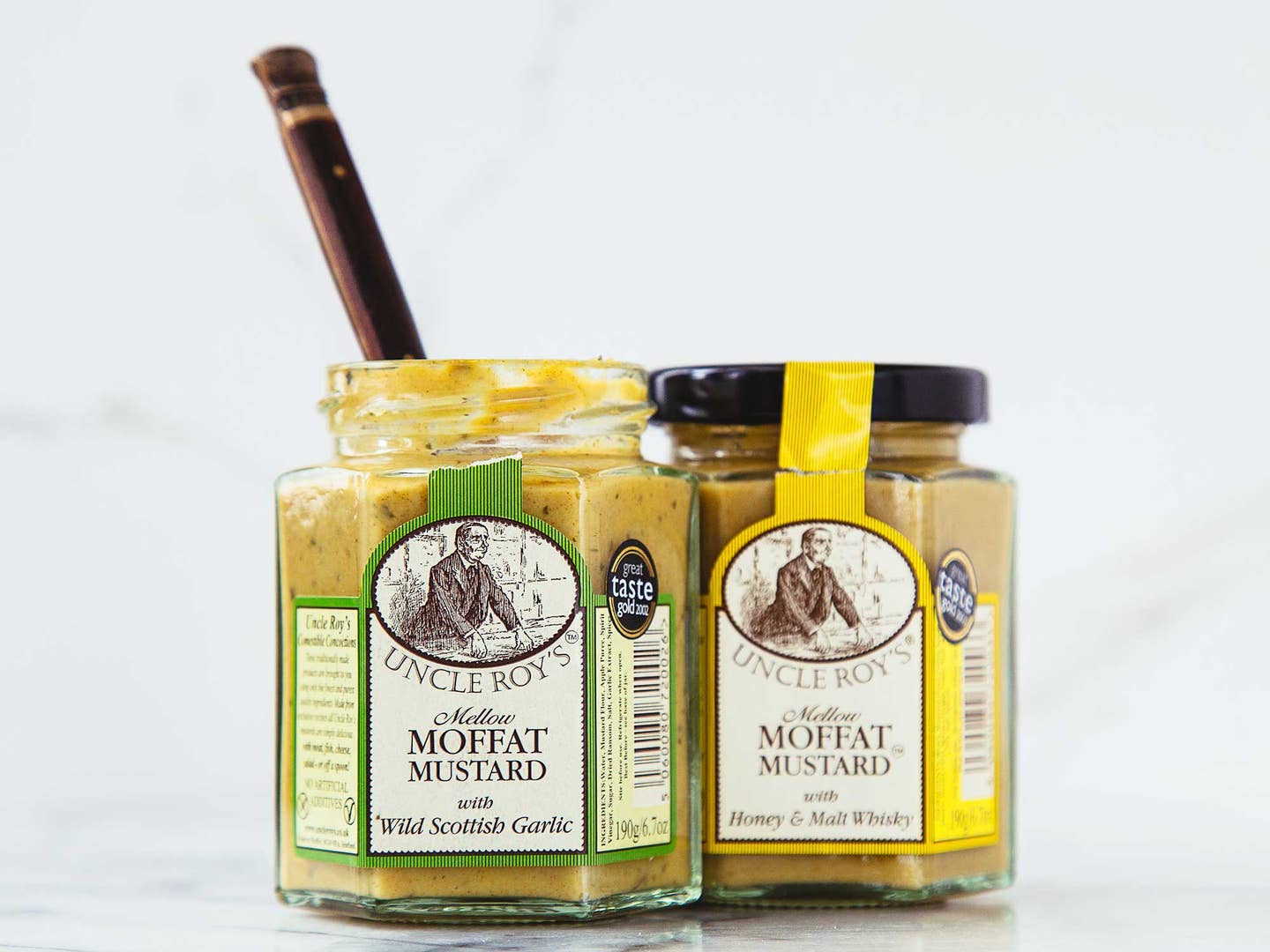 If you like the flavor of smooth French and English mustards but can’t take the heat, Uncle Roy’s is a lovely option. Apple purée tempers the burn without the cloying stickiness of sweet honey mustards. Uncle Roy’s also features a number of tasty flavored versions; Wild Scottish Garlic is one of our favorite accompaniments to roast pork loin.

This boutique product from a homey Midwestern brand is shy on Dijonaise burn and not so grainy as moutard a l'ancienne. Its smooth, mellow base is flecked with whole white and brown mustard seeds that pop like spicy caviar. The texture is addictive spooned right out of the jar or in a warm German potato salad.

More From The Modern Pantry