Learning to Drink the Japanese Way 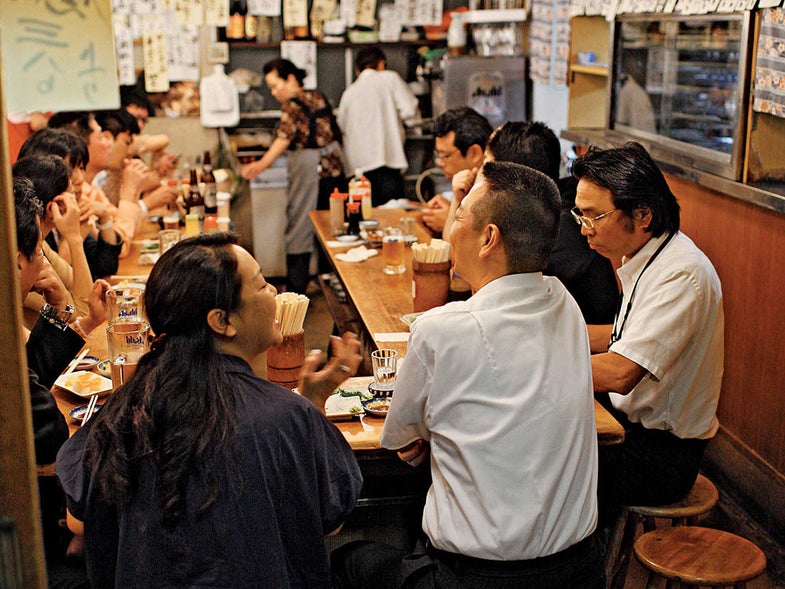 Plenty of people have written about how overwhelming it can feel to visit Japan as a foreigner, how there are so many stimuli that your entire nervous system overloads and explodes into smithereens, rendering you a gap-mouthed sack of awe and wonder. This is true: Things are crazy in Japan! They have ramen-dispensing robots!

But really, things aren’t so crazy. Japanese culture is highly structured, and there’s an order to most everything, from the bullet trains to the bento boxes, and particularly the drinks. Be it beer, whiskey, coffee, or tea, the rules and rituals endemic to Japanese drinking turn ordinary experiences into something ineffably special, from the cocktail-bar owner who changes his glassware seasonally to the barista brewing your coffee with a chemist’s precision.

There are a few guiding principles that shape food and drink specifically, and one of the most striking is the general respect for shokunin. Shokunin translates literally to “artisan,” but in Japan, it’s more than that—it’s the people who dedicate their lives, physically and mentally, to perfecting a single craft. Knife-makers following ancient traditions are shokunin, but so too may be brewers or bartenders. Craft permeates all aspects of Japanese life.

All this time and effort shows in the quality of the end product, but it goes beyond matters of simple taste: In Japan, part of your deal with shokunin is to follow the proper way to consume the food or drink they’ve painstakingly prepared. It’s not ceremony for the sake of ceremony; it’s ritual designed to help you, the eater or drinker, have the most enjoyable experience possible.

“There is a deeply-rooted belief that you should approach making food and drink with a level of dedication and respect, and then the person receiving it will notice, and it will affect their experience in a certain way,” says Matt Goulding, the editor of Roads and Kingdoms and the author of the recently-released Japan travel guide Rice, Noodle, Fish. When everything goes according to plan, both the maker and the consumer end the experience satisfied.

It’s a lesson I took to heart while visiting Kyushu, Japan’s southernmost island, to see how shochu gets made. Shochu is a spirit made from grains (rice, barley, buckwheat), sweet potatoes, or brown sugar, fermented with different types of koji (inoculated rice) and distilled into a clear liquor that’s the beloved workaday spirit of southern Japan.

Shochu drunk straight, on the rocks, or diluted with hot water or lemon soda, and shochu proponents boast it doesn’t cause hangovers (a claim I’m not sure science supports). Needless to say, it too has its shokunin, called toji: master distillers who dedicate their lives to producing superior shochu, tending to giant clay vats of fermenting grains and carefully filtering and diluting the distilled alcohol into a palatable sipping spirit.

The proper way to appreciate the toji‘s work, as it turns out, is to have a grand old time while drinking their shochu. So drink I did, at hotpot restaurants and tiny izakayas and high-end tempura counters. I was assigned a seat and poured glass after glass, first with polite deference, in keeping with the unspoken rules of Japanese hospitality; and later with unfettered glee as we grew tipsy and loose.

I experienced the phenomenon of what shochu enthusiasts call “dai yame,” or being “woken up by shochu,” which is what happens when you drink a lot of it. I snacked on dried stingray strips dipped into Kewpie mayo to offset the alcohol; I gamely karaoke’d The Beatles when the night demanded it. Taken together, these activities constitute a yokaban, regional slang for, roughly, “good night out [typically fueled by shochu],” and it’s an integral part of both social and professional life in Kyushu.

By participating in said yokaban, I was nailing my role in the night-out play—the script called for me to have a good time, so a good time I would have, dammit. It’s not that drinking back home in the U.S. isn’t fun. But when you’re a foreigner unattuned to local customs, it’s liberating to acknowledge your lack of knowledge and follow a procedure designed to ease you into a good time. The end result, whether a raucous night out or refined tea ceremony, is almost always worth it.

On my last night in Japan, a Japanese friend in Tokyo took me out for a proper sendoff. We ate and drank copiously at no fewer than five separate establishments, growing hazier and heavier with each stop through the city’s labyrinthine neon alleys. At some ungodly hour, she led me to something that appeared to resemble a fallout shelter under a highway; a bar called Track.

Inside, the bar was meticulous. There was flattering low lighting and vintage movie posters in the bathroom and a DJ wearing a white lab coat, carefully selecting jazz records from a well-organized wall of shelves behind him. (Suffice it to say, to Goulding’s point, that the mood was affecting my experience in a certain positive way.) At the bar, when you order a shochu or a whiskey on the rocks, the bartender spends about 10 minutes hand-chiseling a chunk of ice into a perfect sphere that fits perfectly into its Old Fashioned glass, upon which a perfect pour of liquor is bestowed.

I ordered a Japanese single malt and the bartender began his ritual. I waited for him to slide the glass across the bar, so I could begin mine, to swirl, sip, smile, and nod. And as we followed these rules, everything came together in perfect harmony—the aesthetic, the soundtrack, the spirit, the bartender’s craftsmanship—and that same drink I’d mindlessly sipped at a hundred bars in the past suddenly tasted very fine indeed.