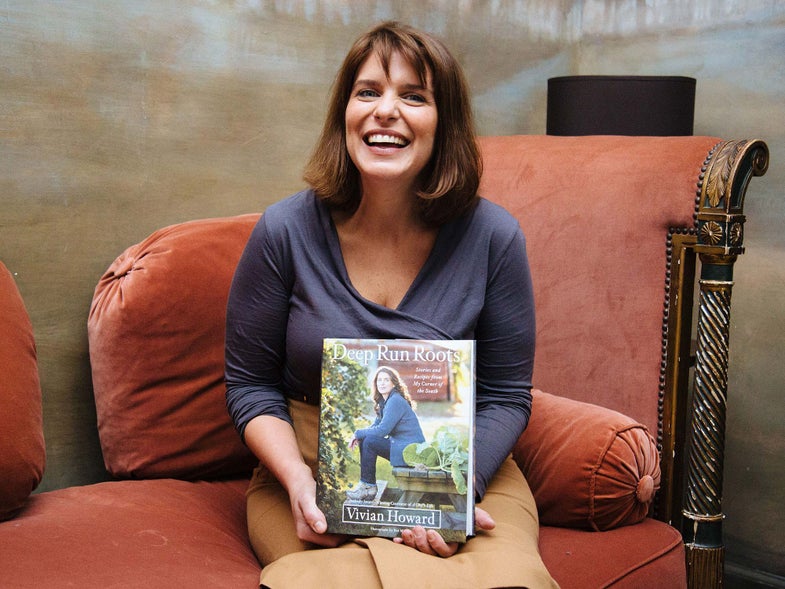 In a time when the rift between small-town America and its city-dwelling counterpart has never been so apparent, any chance to find common ground is one worth exploring.

Born and raised in rural Deep Run (population: 3,000), Vivian Howard moved to New York City to work in big-city kitchens. When the chef and her husband Ben Knight returned home 12 years later with plans to open her acclaimed restaurants, Chef & the Farmer and the Boiler Room, she was shocked to see how much the area had changed: Industries like tobacco and textiles, key pillars of the eastern North Carolina economy, had disappeared, and with them the jobs and talent that had once bolstered them. Far from being an isolated phenomenon, the decline of manufacturing is manifesting across the country—whether that means communities built on tobacco, coal, or automotives.

Back in Kinston, North Carolina, the closest city to Deep Run, a once-disenfranchised community has found hope through food: Howard’s work at Chef & the Farmer earned her a PBS documentary-cooking series A Chef’s Life that spotlights her cooking, as well as her town. Howard, who jokingly says she’s already been “written in on several ballots” for the North Carolina gubernatorial race, in reality shares little about her political leanings. In her own words, her work is to empower and celebrate her culture. But what she speaks openly about is the power of food to bridge differences and find a powerful common ground.

We sat down with Howard at the Charleston Wine + Food Festival to discuss that very idea, and how she plans to address it in the next season of Chef’s Life.

You’ve talked a lot about idolizing the place you come from, but that’s not to say there isn’t an incredible amount of struggle and hardship. Can you talk a little about that?
I grew up in eastern North Carolina and I always wanted to leave. I left home when I was 14 and moved back when I was 26. When I moved back, I noticed that things were very different. Tobacco and textiles were the industries that really supported eastern North Carolina historically. In the period of time that I had been gone, both those industries shriveled up. With it, every young person who could left. The community experienced tremendous brain drain.

When we moved back, I realized that everybody who was left apologized for still being there. You know, “Soon as my mama dies, I’m moving to Raleigh,” or, “I had to come back here to take care of my family’s home.” Everybody had a reason and apology for still being in eastern North Carolina.

Why do you think that is?
I think that that is the case in so many small towns. People are helpless. The industries that were once there have left. Much of rural America does not have broadband internet, which is in my opinion the infrastructure of the 21st century. We’re not talking about paving roads anymore. People in rural America in small towns need to have access to high-speed internet. It’s like a right as an American. Those sorts of things I think are leaving rural America behind.

So what I’ve done, that I’m not sure has made a major impact or not, what I do in my work is exalt the food traditions of eastern North Carolina, which is the thing that people still have.

What has that celebration of food and culture achieved in Kinston and Deep Run?
What I’ve noticed is that when you celebrate these traditions, it gives people pride in themselves and pride in their place. I think that feeling of pride is something that every community needs to move forward. It’s kind of esoteric and may not have a lasting impact, but I think that food is something that is very important.

Stepping back a little, what do you think food can do to help bridge some of the divides between small-town and rural communities and the city?
I live in rural America. I lived in urban centers for quite some time, so I feel like I understand both sides of this issue. I feel as if there’s a lot of mistrust and suspicion between rural and urban populations, and I don’t think that either group can see themselves in the other group. But what’s interesting is that so many chefs, food personalities, and restaurants celebrate rural America on their plates in these very urban centers.

We’re in Charleston right now, and I could name 10 chefs who have made names for themselves exalting the food of poor communities. So it’s really interesting to me that we can do that, but we can’t actually get to know anyone in those communities. I think people on both sides of the issue would be better off, more informed, and less angry if we took the time to actually talk to one another, maybe break bread, because I think food really is the one connector.

Can you elaborate on that?
If you look around the world, you notice that we all eat the same things. Every culture has its own hand pie, its dumpling, its noodle, its broth with healing powers, and we all want the same thing for our loved ones. I think that if there is a language that we all speak, it’s food. And I think if it is possible for us to heal and not hate one another it will be through food.

That’s what you’re doing on the next season of A Chef’s Life, right?
I’m working on a new version of our series that actually addresses some of these issues, hopefully showing us how we’re all more alike than we are different. Currently, every episode is about an ingredient and in the future, my hope is that every episode will be about one of these cultural thread dishes.

When are you going to run for governor of North Carolina?
Pretty soon. Pretty soon. I’ve been written in on several ballots already.