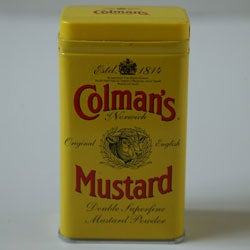 The concentrated kick of Colman’s mustard powder is an essential component of many classic dishes—especially creamy or cheesy ones, like welsh rabbit—and it makes an excellent rub for roasts like our Prime Rib. Some cooks also use it to make their own spreadable mustard by adding cold water, which activates allyl isothiocyanate, the mustard’s fiery chemical compound; jarred versions contain an acid (usually vinegar), which stabilizes it. An English housewife is said to have discovered the trick of milling mustard seeds into a powder in 1720, but it wasn’t until 1814 that the powder began to be produced on a large scale. That was the year when miller Jeremiah Colman, who lived in Norwich, England, found a way to crush the seeds without generating heat, which saps the seeds’ volatile oils of their pungency. Today the English company that bears Colman’s name is the leading producer of powdered mustard worldwide. The process hasn’t changed much in two centuries: brown and white mustard seeds are crushed between rollers and then sifted and blended together. Nowadays a can of Colman’s is a pantry staple in England. When I asked Nicky Perry, the proprietor of the Tea & Sympathy cafe, a Brit hangout in New York City, whether she uses it, she replied, “I don’t know of any other mustard. It’s in every British person’s larder; it’s part of our culture. Bit like tea, isn’t it?”