Meet the love child of yogurt and cream 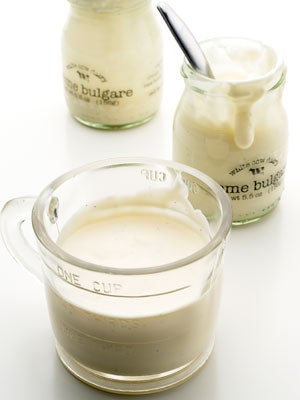 When I travel to a foreign city, one of my favorite things to do is explore the dairy section of a local grocery store. What I discover is often an educational, and delicious, microcosm of that country’s cuisine. When in the Republic of Georgia, I found full-bodied yogurt flavored with rose-petal jam. In Turkey, I ate kaymak, a luscious cousin to clotted cream. I was startled, though, back at home, to come across dairy products as novel—and delectable—as anything I’ve encountered overseas.

At White Cow Dairy, a tiny farm about 25 miles south of Buffalo, New York, owner Patrick Lango transforms the milk from his 30 cattle into some of the best dairy products I’ve ever tasted. The fourth-generation farmer makes a variety of milk-based delights, from traditional items, such as butter, to quirky electrolyte-packed whey “sports drinks.” But it’s his cultured creams—luxurious cream-based yogurts—that are the most special. Made by adding a starter culture to heavy cream, the cultured cream has luscious milk-fat body and just enough tang to cut the richness. Though it comes in several flavors, like tart rhubarb or mellow pumpkin, the version called creme bulgare (the French term for cultured creams), which includes a touch of Meyer lemon juice and raw honey, is my favorite: lightly sweet and mildly acidic, it’s wonderful with berries, granola, spooned over pound cake, or eaten straight out of the jar.

Lango insists there’s nothing extraordinary in his cooking process—”But,” he says, “I am using fantastic milk.” Lango’s herd grazes on a mix of plants (burdock, chamomile, and peppermint, to name a few) that gives the milk its complex flavor. The dairy kitchen stands less than eight yards from the barn, and Lango begins creating his foods within moments of milking. “We observe the universal law of cooking,” he says. “Great ingredients make great food.”