In New England, baked beans are an enduring tradition. 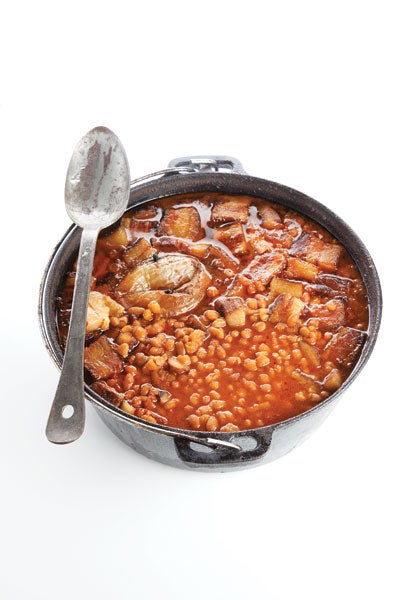 It’s a brisk November morning, and I’ve just arrived in Lisbon Falls, a small town 25 miles outside Portland, Maine, where I’ve come to learn more about one of the earliest and, in my opinion, most delicious American dishes—baked beans. I have always loved this rich casserole of legumes, smoky pork, and sweet molasses, and I figured that there is no better place to start my quest than at a proper New England baked bean supper. So I’m meeting Margaret Logan, who is in charge of tonight’s meal at the Lisbon United Methodist Church, a fund-raiser that takes place on the fourth Saturday of each month. For $7, attendees can get their fill of sliced ham, frankfurters, coleslaw, brown bread, soft rolls, homemade pie, and long-simmered baked beans.

At 7:30 A.M. in the church’s fluorescent-lit kitchen, Logan, a white-haired woman in blue jeans and a navy sweatshirt, is already hard at work. She’s been volunteering at these suppers—or “suppahs,” in Maine parlance—for almost 40 years, and she has eaten beans every Saturday night since she can remember. In this part of the world, the Saturday baked bean supper is a way of life. The communal tradition spans back to the late 1800s, and it still takes place in firehouses, grange halls, and churches throughout New England. According to Logan, “There’s a bean suppah every week somewhere.”

Logan is making a big batch using navy beans, which she prefers for their mild flavor and creamy texture. She soaked her beans the night before, a step that rehydrates them so they cook evenly. Just as important as soaking, Logan says, is choosing varieties that will hold their shape. Though most common beans (Phaseolus vulgaris) work well, many of the preferred types are grown in the region: dense yellow eye beans, which are ivory with a caramel spot; soldier beans, starchy and white with mahogany markings; Jacob’s Cattle, nutty-tasting, red-speckled beans; and small, ivory-colored navy beans.

Logan pours her beans into a huge crock pot and heaps in quartered onions, salt pork, brown sugar, ketchup, mustard powder, garlic salt, and molasses. She covers it all with water, gives them a stir, and sets them to cook on low heat for the next eight hours. Though these are technically stewed beans, and not oven-baked (as was traditional), the meal is nearly identical to what New Englanders have been eating for centuries.

Maine is baked bean country. The oldest factory that cans them, B&M, still operates out of Portland. Ask people what their favorite beans are, or the best way to cook them, and you will not only get an answer, but you may also spark an argument. In Serious Pig: An American Cook in Search of His Roots (North Point Press, 1996), a book that includes an impressive baked bean manifesto, author and part-time Maine resident John Thorne writes that the state is “still a place where to be described as full of beans is to be complimented.”

Perhaps passions run so high in this part of the country because baked beans are one of the original Colonial foods. According to Maine-based historian Sandra Oliver, the English settlers brought pea seeds so they could make pease pottage, a nourishing stew made with peas and flavored with salted meat. But the plants weren’t hardy enough for New England’s harsh climate. Beans, however, were indigenous to North America and thrived, so the settlers used them in the dish instead.

The Saturday bean-supper tradition emerged from two aspects of Colonial life: routine and religion. Saturday was a baking day, and once the bread was done, beans slowly simmered in the oven’s residual heat. Along with other early American foods, brown bread was typically eaten with the beans. Together, the beans and bread formed a protein-rich meal. In observance of the Puritan Sabbath, cooking was forbidden from sundown on Saturday until sundown on Sunday. The beans cooked all day Saturday, were ready for supper that night, and were eaten the following day.

Baked beans fed more than just family. They sustained lumberjacks, miners, and other laborers who needed filling, inexpensive food. In the Northeast, cooks in logging camps prepared “bean hole” suppers by burning wood down to hot embers in a pit that they had dug in the ground, then lowering in a lidded pot of beans, and refilling the hole with dirt. At the end of the workday, a hot meal awaited the workers. New England’s baked bean traditions are similar to, and may have influenced, other regional styles of baked beans: Quebecois feves au lard, Southern barbecued beans enriched with smoked pork, and cider baked beans from Appalachia.

Though we think of baked beans as sweet, the dish, in fact, started out savory. The first recorded recipe, published by Lydia Maria Child in The American Frugal Housewife in 1829, called simply for salt pork, beans, and black pepper. Beans became sweet in the mid-1800s when home cooks started to add small amounts of molasses to their bean pots. They grew even sweeter when canned versions, spiked with much more molasses, became popular. Some might lament the “candyfication” of baked beans, yet the popularity of canned baked beans deserves much of the credit for the longevity, and global reach, of this New England dish. (The world’s biggest consumer of baked beans, the United Kingdom, took to the dish in the 1880s, when it was introduced as a luxury canned import.) B&M alone sells more than 5 million cans per year.

After learning so much about baked beans, I was eager to make a batch of them myself. I soaked two cups of navy beans overnight, and by the next morning, they had absorbed most of the water. According to the instructions in the New England volume of the wonderful Time-Life Foods of the World series, I gently boiled the beans until the skins popped open when I blew on them (a neat trick that indicates they’re ready).

In a lidded clay pot, I layered salt pork I had brought back from Rosemont Market & Bakery, a food shop in Portland, Maine, with beans, more pork, molasses, and mustard powder, then added more beans and embedded a clove-studded peeled onion in the mixture. I covered the beans with water and slid the pot into a 250-degree oven. Soon enough, the sweet smell of molasses developed, followed by the aromas of onion, clove, and pork, and finally, the starchy scent of slow-cooked beans. After six hours, I removed the lid so the beans could develop a flavorful crust on top, then I served myself some. One small bowl with some good bread was all I needed for dinner that night, which is exactly the point of this time-tested dish.