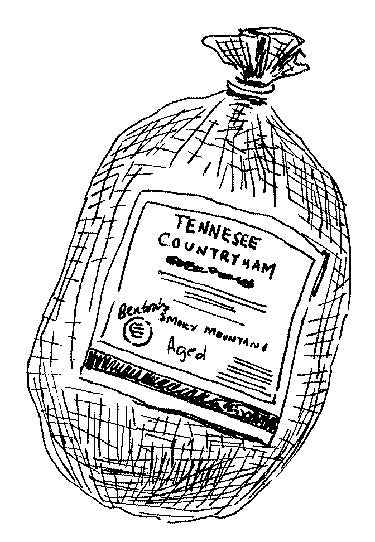 Allan Benton started his Country Hams business in 1973 in Madisonville, Tennessee, just west of the Great Smoky Mountains. He cured his hams in a modest single-level cinder-block building that housed all his operations, from smokehouse to loading bay to cash register.

Now, 37 years later, after earning applause and menu space from top-rated chefs and becoming one of the most respected producers in the United States, Benton’s maintains its original digs and its time-tested dry-curing process.

Though Allan Benton’s dry-cure recipe (salt, brown sugar, red pepper, black pepper) and curing process (nine to ten months, versus three months for most domestic hams) are known, his products and flavors are all his own.

The whole country ham weighs about 15 lbs. and goes through an extended aging process (12 to 18 months), allowing for Benton’s unique complexities to develop.