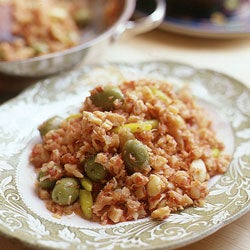 Appearing on Christmas menus throughout Mexico, this version of salt cod with almonds and olives comes from the nation's capital and is based on one from the Spanish province of Vizcaya. David Sawyer
SHARE

Salt cod appears on Christmas Eve tables throughout Mexico. In the nation’s capital, the most popular preparation is this version of a classic salt cod dish from the Spanish province of Vizcaya. The Mexican interpretation adds almonds and olives and omits the Spanish original’s cured ham, dried sweet red peppers, and dried red chiles.