A Trip to Bountiful 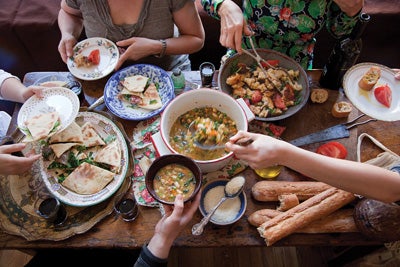 The market in Gubbio, a hill town in Italy’s central region of Umbria, isn’t the biggest market I’ve ever seen. It comes to life early every morning in the shade of an ancient portico, with just a handful of vendors setting up their stalls. There’s the salad seller with his gorgeous radicchio, arugula, and baby lettuces; the herb man with his hand-tied bunches of sage and rosemary all lined up like little bouquets; the produce vendor who sells tomatoes, peppers, garlic, and more. As the local women shop, their husbands congregate on benches in the nearby park to discuss the soccer scores. By noon, the market tables are practically empty and everyone heads home for lunch.

As tiny as that market is, it was the source of virtually all of my family’s meals for the few weeks last summer that we called Gubbio home. We’re not from Umbria: my mom, the chef and cookbook writer Lidia Bastianich, was raised in a part of Istria, a peninsula connected to Croatia and Slovenia, that belonged to Italy until 1947; my brother, Joe, and I grew up, and are now raising our own families, in New York City. We came to Gubbio because of my husband, Corrado, whose family is from the village and still lives there, and because my mother and I have always wanted to take the time to get to know the finer points of Umbrian cuisine. What better way to do that than to spend a few weeks there to celebrate Corrado’s fortieth birthday? And what better place to start than the market?

We rented a house on the outskirts of town, and on the mornings that I’d drive with my young son and daughter to that little market to pick up ingredients for lunch, I would flash back to when Joe and I were kids, traveling around Italy during the summers with our mother. Each year, she’d pick a new region to explore—one summer it was Sicily, the next, Tuscany. My brother and I used to get into fights in the backseat of our un-air-conditioned rental car, and when Mom would finally pull over, it was often at some market she wanted to check out. We’d run around the stalls, ogling all the different ingredients. In Piedmont, I remember, it was spiky cardoons; in Calabria, piles and piles of spicy peperoncino; in Venice, a mind-blowing array of fish. Back then, in the 1970s and ’80s, Italian food in the States was spaghetti and meatballs. Aside from the Istrian foods my mother cooked at home—seafood stews, quince soup—our visits to Italy’s markets were our first encounters with real regional Italian ingredients and cuisine.

By the time my family arrived in Umbria for Corrado’s birthday, we were pretty familiar with the basics of Umbrian cooking; in fact, many of the ingredients—the famous brown lentils from nearby Castelluccio, the region’s equally renowned cured meats and handmade eggless stringozzi pasta—are ones we serve at our restaurants Felidia and Becco in New York. But there’s something wonderful about seeing these ingredients in context, at the market and in the butcher shops and bakeries around town. Suddenly, the traditional dishes and the way the ingredients come together start to make real sense.

Case in point: the local flatbread known as torta al testo, made all around Gubbio, that cooks stuff with whatever ingredients they like, from sauteed vegetables to cured meats and cheeses. As we discovered the day after we threw a big birthday bash for Corrado, this is a dish that seems custom-made for market shopping. A few dozen friends were planning to drop by for lunch, and in the morning, with no set menu in mind, my mother and son, Lorenzo, took off for the market. It was only when they returned with big sacks full of food and unpacked it all onto our kitchen table that a meal started to take shape. There were bunches of broccoli rabe that would pair perfectly with grilled fennel-and-pork sausages inside_ torta al testo_ (see ** Umbrian Flat-Bread Sandwiches), which we would bake ourselves. The spicy arugula would work well as a filling, too, with robiola, a creamy local cows’ milk cheese, and maybe a few slices of prosciutto. And there were perfectly ripe, juicy tomatoes that my mom decided to turn into a panzanella salad (see ** Panzanella), tossed with chunks of garlic-rubbed toast and herbs.

The kitchen was filled with such laughter that morning; flour flew here and there as my mother showed her five grandkids how to make the dough for the tortas, which we cooked the traditional way, in a cast-iron pan. After six loaves were done, we sliced them open, and the kids started layering the ingredients inside. Meanwhile, I laid out all the affettati, or sliced cured meats, that Mom had brought home from the local norcineria, or pork butcher: lean and dark wild boar salami, a local Umbrian favorite, and salamini, thin, chewy dry-cured sausages.

When the tortas were finished and the salad was made, my mom looked at the remaining carrots and tomatoes and beans and squash on the table and did what she’s inclined to do when faced with a surfeit of vegetables: she made soup. Soon, a fine Umbrian vegetable soup (see ** Umbrian Vegetable Soup**) was bubbling on the stove, filling the air with a sweet aroma as friends and family started to arrive.

Later, as I watched everyone reaching to try another version of the torta or ladling themselves a bit more of that last-minute soup, I realized that we’d done more than learn about Umbrian recipes on this family vacation. We’d embraced a fundamental principal of la cucina Italiana that applies no matter where you are: when you let the market be your guide, cooking is a real joy. —Tanya Bastianich, coauthor (with Lidia Bastianich) of  _Lidia Cooks from the Heart of Italy (Knopf, 2009)_