Diana Kennedy's greatest gift to Mexico is her outsider's perspective 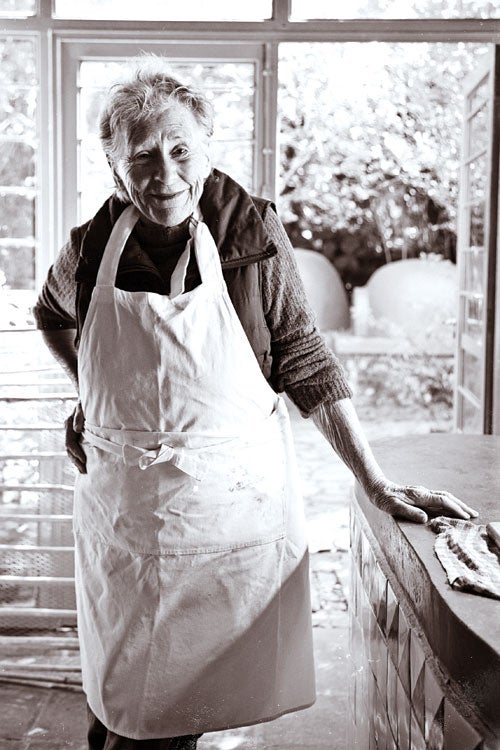 “The Julia Child of Mexico? Oh dear, what nonsense.” Diana Kennedy is making her way briskly across the small central square of Zitacuaro, a town of about 150,000 in the pine-forested mountains of northeast Michoacan state. “Of course I’m flattered by the comparison,” she adds, “but it’s totally inaccurate.” I have just arrived to spend a few days at Kennedy’s home, in the countryside not far from here, observing the British-born authority on Mexican cuisine—renowned cook, ethnographer, naturalist, and perfectionist—at work. The slight 89-year-old calls out to me over her shoulder as she goes; it’s all I can do to keep up. We advance into the maze of the covered market, and vendors to the left and to the right call out to Kennedy as she moves from stall to stall, vocally appraising what’s on offer, in a crisp British accent that seems not to have diminished in the 55 years since she first arrived in Mexico. Of some pale guavas: “These are a little over the hill. I want them greener.” Of the wild mushrooms called clavitos (little nails): “Unusual to see them this late in the year. Troubling.” Of a sack of chiles de arbol: “Imported from China! The flavor is not the same! And look, they’re 80 pesos to the kilo; the local ones are 120. How can the farmers be expected to compete?” At the table of a seller of wild greens, Kennedy’s eyes light up at the sight of quelites (lamb’s-quarter). “Señora, how do you cook it?” she asks. The vendor replies that she boils them in unsalted water, drains, and then salts them. It must be sheer reflex by now, this thing that Kennedy has spent a half-century doing: collecting recipes from cooks across the vast span of Mexico, a job that is never complete.

As we head out onto the road in Kennedy’s Nissan pickup truck, the parking attendant offers a blessing. Kennedy beams. “Always nice to get a blessing, isn’t it? Especially as I’m such a pagan!” Next stop is a pulqueria—a cantina specializing in the sale of pulque, the fermented sap of maguey. The owner, whom she introduces as Rigoberto Medrano Soto, fills small earthenware cups with frothing, milky white pulque—bracing, sour, vigorously effervescent. Kennedy and the pulquero discuss the health of his plants, and the work of a maguey researcher Kennedy recently brought back with her from a conference in Hidalgo. This is another vital aspect of her work: the collecting and cataloguing of information about edible plants in Mexico, a place of astonishing biodiversity.

In fact, the more time I spend with Diana Kennedy, the more I’m reminded not of Julia Child, but of the 19th-century philosopher-naturalists, of Charles Darwin, or Henry David Thoreau, an impression only reinforced by a tour of her adobe house. It’s beautiful but not at all grand, more like a thing that sprang from the rocky soil than a structure built by human hands, surrounded by evergreen forest and vegetable gardens heaving with produce. The man Kennedy describes as the foreman of the property, Carlos Ferrer, works closely with botanists from UNAM (the National Autonomous University of Mexico); when I arrive, he’s preparing a batch of plant samples. There is an agreeable, industrious sort of feeling all around.

In an outdoor kitchen equipped with wood-fired grills and two adobe beehive ovens, reflectors are set up to harness the sun’s energy and heat water; pinned to a clothesline nearby, plastic bags, rinsed for reuse, bob on the breeze. Upstairs, Kennedy’s bedroom opens onto a sun-drenched study; books and papers are stacked on every surface (“My out-box,” she says, pointing to a chaise longue buried in mail), and dozens of morel mushrooms are laid out to dry. A door past the staircase leads to a greenhouse planted in specimens ranging from culantro to vanilla to bananas. A large tank collects rainwater throughout the year—it’s the house’s only source, and Kennedy monitors every drop—while a patch of land below the garden serves as a filter bed for waste water.

I think again of Thoreau, and his own experiment in living close to the land at Walden Pond: “I went to the woods because I wished to live deliberately, to front only the essential facts of life, and see if I could not learn what it had to teach, and not, when I came to die, discover that I had not lived.” Kennedy’s statement of purpose, laid out in her book My Mexico (Clarkson Potter, 1998), is slightly less grandiloquent but no less firm in its convictions: “I wanted a house of locally made materials that would address itself to the resources of the area and be in tune with the restrictions with which my neighbors had to live, and had survived, for many years.” And it must be said, while Thoreau lasted two years in the woods, Kennedy has persevered for 32, and counting.

I return to the pulqueria one evening, and as the sun drops behind the mountains, Medrano Soto provides some perspective on what persevering in this part of Mexico has come to mean in recent years. The area has seen its share of the narco-crime currently oppressing the country. People are on edge, cautious about going out; whereas his father typically sold 500 liters of pulque daily back in the 1980s, today the pulqueria sells more like 30 liters in a day, most of it carry-out. Kennedy, he emphasizes, has set down deep roots in this place. “She’s very altruistic,” he says. “She cares about things a lot of Mexican people don’t.”

It’s a common refrain among Kennedy’s friends and colleagues, in Mexico and abroad. Carmen “Titita” Ramirez Degollado, the chef-matriarch who presides over the El Bajio restaurants in Mexico City, is one of many Mexican chefs who have made the pilgrimage to Kennedy’s kitchen to cook and learn. “Diana has dedicated her life to Mexican cooking!” she says. According to Fran McCullough, the editor at Harper & Row who worked with Kennedy to produce her seminal early books in the 1970s (see A Life in Letters), “Because she started her work when she did, and with an anthropologist’s eye but a home cook’s approach, she had a unique appreciation of the cooks who shared their food with her. She has both authority and an amateur’s total surrender to her subject.”

As for Kennedy, she’s a stickler about giving credit where it’s due. “Josefina Velazquez de Leon did it first, beginning in the 1940s,” she says, “traveling to different regions, collecting recipes, and publishing them. She was the one who opened my eyes to Mexico’s regional cuisines.” As a writer, Kennedy’s inspiration was fellow Englishwoman Elizabeth David, “though I’m not as scholarly—no, not nearly—as she.”

Writing books wasn’t even a faint ambition when Kennedy (nee Diana Southwood) arrived in Mexico in 1957, with her soon-to-be husband, Paul Kennedy, a New York Times correspondent living in the capital. In a poignant passage from Nothing Fancy (Dial Press, 1984), her wonderful memoir-with-recipes, Kennedy draws a sketch of her husband with characteristic candor and economy. “He would collect recipes for me when I couldn’t accompany him on his travels,” she writes, and then shares one that he recorded for “Sancocho (Dominican National Dish),” hilarious in its telegraphic terseness. “His typing was no better than mine, his spelling far worse—like me, he was always in a hurry.”

Over several afternoons in Kennedy’s kitchen—the indoor one, with a great tiled “peninsula” equipped with gas burners, its counters strewn with yet more labeled, dated specimens (chiles, herbs, pineapple vinegars)—I get more mental snapshots from that happy period in her life, in the 1950s and ’60s, when every day brought thrilling new flavors and exotic ingredients. Preparing a snack of salsa de albañil (literally, “bricklayers’ sauce”), a tangy tomatillo salsa with sliced avocado, strips of queso fresco, and chopped cilantro, Kennedy recalls the first time she tried it, at the Lincoln Grill in Mexico City in the early ’60s. It was served to “soak up the drinks,” along with tortillas.

In the late 1960s, when Kennedy was living in New York City following her husband’s untimely death from cancer, it was her friend Craig Claiborne, the food editor of The New York Times, who pushed her to start teaching Mexican cooking classes. That’s how McCullough, then an editor at Harper & Row and a California transplant hungry for good Mexican food, found her, and ended up working on five books with her. By 1976 Kennedy was back in Mexico City; in 1980, she moved out here to Michoacan, to the property she dubbed Quinta Diana. Before long, the acolytes began arriving at her kitchen door.

As we work, Kennedy’s kitchen assistant, a young man named Miguel Angel, works alongside us; he and she cook in easy symbiosis, often taking over from one another mid-task. I’m assigned to slice an avocado, a duty of which I have, up to now, considered myself adequately capable. Kennedy takes one look and says, “Well, we won’t be photographing that one.” This qualifies as getting off easy. “I’ve seen her bring a very famous chef to tears by critiquing his efforts to make her food,” McCullough tells me. But isn’t learning the point? Here is a woman who went into the woods to live deliberately. If you don’t want to do things her way, then why follow her into the woods?

What strikes me above all about the dishes we prepare in Kennedy’s kitchen is how simple, but also deeply flavorful and satisfying, they are. A Oaxacan egg-and-masa “omelet” infused with the rich, round, root beer-like flavor of yerba santa leaf. Lusty Central Mexican-style “pot” beans topped with soft cheese melting to cream. “I just mash the beans slightly,” she says, “so they’ll absorb more flavor.” Requeson revuelto, a ricotta scramble with serrano chiles, is cooked until the curds are golden and sweetened ever so slightly by tomatoes. These are dishes she’s made too many times to count, the kind of thing she’ll produce in minutes for lunch. But she approaches each one as if she’s making it for the first time. After all these years, the ingredients still turn her on. Sauteing some quintonil, a green in the amaranth family, on a ceramic comal, she inhales deeply. “Smells of iron, doesn’t it?” she murmurs. “And the chickens are going to love it, because they’ll get all those stalks!”

Honest food. “Comida casera,” she calls it, home cooking of the very best kind. The attention to detail and technique, to doing things properly, that she’s observed in Mexican home cooks has earned her highest admiration. “To me, the interesting part of cooking is cooking,” she says, “bringing flavors out of ingredients, not having to put flavors in.” Fronting, in other words, only the essential facts of life.