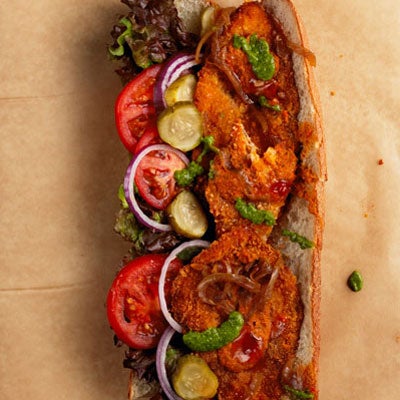 In the fall of 2002, during the height of the second Palestinian intifada, I began my journalism career with a few ill-planned months in Israel. I’d wanted to become a war correspondent, but I mostly ended up wandering the country with a high school friend named Cliff. Surrounded by beautiful Israeli women, we sought love from these desert flowers, but the near-weekly suicide bombings by Hamas terrorists had made the youth suspicious. They’d interrogate us: “Don’t you know this country is a freaking balagan?” A balagan, we learned, is a hot mess, and the thought of us Canadian kids hanging out as militants blew up pizza parlors struck them as a big freaking balagan.

With few friends, and even fewer shekels, Cliff and I spent our nights pacing the streets, living on a diet of bottled water and schnitzel sandwiches. In a country known for Middle Eastern food, schnitzel remains one of the lone culinary holdovers of Zionism’s Austro-Hungarian roots. It’s been an Israeli staple since the early days of the country’s existence, found everywhere from the frozen food aisles of supermarkets to kibbutz dining halls to take-out windows in bustling nightlife areas, where it comes in sandwich form. Turkey or chicken breasts (veal is too expensive to raise in the desert) are pounded; marinated in olive oil, garlic, and lemon juice; dipped in flour, then egg; dredged in bread crumbs—sometimes with sesame seeds or za’atar spice—and fried in oil. Fresh-from-the-fryer schnitzels are stuffed into baguettes or pitas and layered with toppings that bridge the gap between Ash-kenazi and Mizrahi (Middle Eastern) tastes: mayonnaise and mustard, but also hummus, tahini, tomato and cucumber salad, and harissa. The sandwiches are so popular, you can find them outside the Holy Land wherever Israelis congregate. On a recent trip to Brooklyn’s Coney Island Avenue, a thriving artery of Orthodox Jewish culture, I came upon two places, Schnitzel King and Schnitzi Schnitzel Bar, that vie for the appetites of students with flavors like “Spanish” (spicy breading with chile peppers) and “Yemenite” (falafel seasoning).

That fall, Cliff and I unwittingly tapped into a welcoming segment of Israeli society. Under the cold fluorescent lights of the schnitzel shacks, to the music of cutlets bubbling in oil, we came together with deliverymen, off-duty soldiers, and religious zealots, talking politics, pop culture, and the future of Zionism in a broken hodgepodge of languages. Our true link was a sandwich that embodied the country’s conflicted identity: a mix of high European heritage and hard-won terroir, whipped together haphazardly, only to endure as a symbol of plucky nationalism. —David Sax, author of Save the Deli (Houghton Mifflin Harcourt, 2009)

In Europe, schnitzel is eaten with a spritz of lemon or with lingonberry jam. When the cutlet evolved into an Israeli sandwich, tahini became the condiment of choice. Today, for Israelis serving schnitzel abroad, that topping is old-school. Yair Isner, an owner of Schnitzi Schnitzel Bar, in Brooklyn, New York, serves his sandwich (pictured above) with sauces including (from left) barbecue, honey-mustard, chimichurri, garlic mayo, pesto, sweet chile, and horseradish mayo.