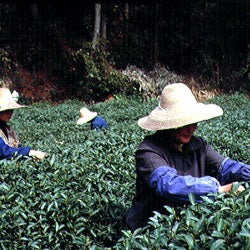 I have traveled here to Hangzhou, in China’s Zhejiang province, in early April to see for myself the source of an extraordinary green tea, China’s most famous, called longjing, or “dragon well.”

Through the green hills southwest of the lake, I make my way to the village of Meijiawu on a road that was paved for Zhou Enlai. He was so fond of longjing from Meijiawu that he made five visits to this bucolic village. And it was here that President Nixon drank longjing.

Amidst the regular rows of tea bushes, three to four feet high, women in deep-crowned straw hats and dark blue sleeve-protectors are picking the new shoots, quickly and confidently plucking just two leaves and a bud from each. The rosy cheeks, beautiful hands, and straight white teeth of the youngest picker belie her age—she is 28, and has been picking only since she was 18. This is not children’s work.

The women labor in companionable silence, broken only by the liquid notes of a bush warbler, and the snick snick of nimble fingers breaking stems. No regional costumes, no picking songs—just hard, careful labor, a day’s work resulting in less than a pound of finished tea made from 80,000 shoots.

The dry leaves of longjing tea are flat and spear-shaped, with a waxy feel. The tea itself has a light, sometimes grassy fragrance with licorice undertones, and a fresh but full, rich flavor that some compare to chestnuts or to Chinese olives. Like wine, tea can vary in quality from year to year, and the longjing from 1992 was considered especially good. Tea drinkers in Hong Kong still speak wistfully of the top-grade longjing imported that year by Thomas Lee, director of the city’s Fook Ming Tong tea shop, remembering its particularly mellow flavor and long, sweet finish—”like milk,” says Wong San-chun, the shop’s tea master. He describes the experience of drinking fine longjing: “At first, it doesn’t taste like much; then, as it goes down your throat, you get the sweet olive flavor; five minutes later, you feel it through your whole body.”

Traditionally associated with freshness, youth, and spring, China’s green teas are richly varied and elusively flavored—fresh, grassy, light, sweet, delicate, with hints of chestnut or licorice. They offer a completely different experience for the senses—taste, sight, smell, even touch—than the black teas that are so familiar throughout what was once the British Empire, including the U.S. They’re also distinct from the Japanese green tea. In color, the dry leaves range from soft gray-green to yellowy green and clear jade. The nuanced liquor they produce may be pale jade-green, like the color of young willows, or yellow-green, or even pale yellow. If you think you’ve tasted green tea in the States, chances are it was nothing like this.

What distinguishes green tea? Unlike oolong tea, which is partially oxidized (it is erroneously termed “semi-fermented”), and black tea, which is completely oxidized, green tea is not allowed to oxidize at all. Enzymatic oxidation gives both oolong and black tea their full fruitiness and complexity. These very qualities are intentionally prevented in the case of green teas by firing or steaming the leaves almost as soon as they are picked.

For much of China’s tea-drinking history, the bulk of Chinese tea has been green, since systematic processes of making oolong and black teas were not developed until the 16th century. Green tea still dominates the Chinese market.

Zhongguo chajing, an encyclopedia of Chinese teas, lists 138 distinct green teas, as opposed to 14 oolong and nine black teas. In addition to varietal differences, such environmental factors as soil, climate, and distinct methods of heating and shaping the leaves account for the great range of green teas throughout China.

Chinese green tea lore dictates that the finest tea is picked before the Qingming Festival, the Chinese celebration of dead ancestors that occurs around April 5. According to tea shop proprietor Ip Wing-chi, there is a saying among tea growers that translates something like, “Three days before, treasure; three days after, trash”. Though doubtless an overstatement, this pronouncement is not quite so far-fetched as it may sound. In east-central China, the most delicate green tea is harvested in the early part of April. The beginning of the spring rainy season around the middle of the month—and the subsequent heat when those rains stop—significantly alters growing and harvesting conditions, and the tea harvested during this second growing period tends to lack the subtlety of its predecessor.

Ye Yang, engineer for the Tea Research Institute in Hangzhou, part of the Chinese Academy of Agricultural Sciences, asserts that “the first flush [the first growth of new leaves] has the most flavor because it has been building up in the plants throughout the dormant period.” Both tea farmers and buyers believe this to be so: Prices of the second flush, harvested after April 10, may fall by as much as 50 percent.

After picking the tea shoots, most small producers of longjing hand-fire their own tea leaves in a large wok. On one farm I visited, the family burned rice straw to heat the wok. Others use more modern fuels. When I enter the kitchen of Meijiawu farmer Ge Miao-shing, his sister, Miao-fen, is wiping an electrically heated wok with a white waxy grease taken from the Chinese tallow tree. It gives off a faint, crayon-y smell. The freshly picked leaves have been left in the shade to wither a bit, which softens them and keeps them from cracking and releasing their enzymes. Miao-fen tosses the wilted leaves in the wok and presses them against the sides with the flat of her hand, lifting the leaves to turn them, then flattening them again. (Later, she shows me her blistered palms.) The wax prevents them from curling and sticking to the wok.

The tea will be fired for about seven minutes, sifted into a shallow bamboo basket, and then cooled for an hour before being returned to the wok. Three firings are required to halt oxidation, evaporate the moisture in the leaves, and give them their characteristic flat shape. After all their work, the Ge family will probably not drink any of the early longjing that they process: It is simply too precious.

Not far from Meijiawu, the Tea Research Institute grows and processes longjing (and other types of tea) under much more controlled conditions. Part of the Institute’s function is pure research, but to make up for reduced government funding, it has begun to sell tea for export. In 1987, to optimize early spring sales of longjing, the Institute developed a new strain, known in the trade as longjing #43, that is resistant to lower temperatures, more consistent in quality, and higher-yielding than traditional varieties. In addition to growing its own plots of #43, the Institute makes seedlings available to farmers in the area. The variety is ready for harvesting around the beginning of March, beating the market for traditional longjing by 15 days or more. It also commands higher prices.

Ye Yang and his colleagues at the Institute ardently believe that the controlled growing and processing conditions they impose results in higher quality overall. But, perhaps more concerned with yield and marketing than with taste, the researchers at the Institute pour me a bitter cup of tea, infused with boiling water that obscured the flavor of the leaves. I wonder if this semi-official tea—even if properly infused—can ever reach the heights of that memorable ’92 longjing.

On the Saturday before the Qingming Festival, as many as 100,000 people have come from nearby Shanghai to the city of Suzhou, in Jiangsu province, for the traditional annual spring cleaning of family tombs. A man on a bicycle, only his head and cap visible, moves through the glowing sulfur yellow of a field of rape blossoms. The deep green, slender stalks of winter wheat are about a foot high. I am headed for Dongshan, known for the production of biluochun, another of China’s most prized green teas—much rarer than longjing. Subtle and delicate, biluochun is scarce because it is grown and harvested in a way that severely limits its production.

Beneath the dusty leaves of loquat and mandarin orange trees, the biluochun tea bushes have reached a height of four to five feet, dense with broad, sharply serrated, dark leaves, tipped with paler new shoots. Three women and two little girls, baskets suspended from their slender necks, carefully pluck these shoots—which will be picked over again before firing, so that only the youngest, tenderest tips are processed. The buds and undersides of the leaves are covered with fine, silky hairs, essential to the sweet fragrance and flavor of the finished tea.

The fruit trees provide farmers with an important cash crop, as well as shading the tender leaves of the tea bushes—but they also makes the bushes susceptible to the trees’ insects and diseases. Biluochun’s delicate, sweet flavor is popularly attributed to the fact that the new growth appears and is harvested while the fruit trees are in fragrant bloom, but in fact few of the orchards are in blossom during my visit.

Walking through the village of Houshan, I follow narrow, stone-paved lanes between gray houses, through a cemented courtyard, into the house of the Shi family. In the clean-swept kitchen, an old woman and a teenage girl are already meticulously plucking the tips from each shoot of the freshly picked tea. Shi Zhi-xing is pan-firing a few handfuls of leaves in the family rice-wok, rubbing them between her palms to give them their distinctive snail-like curl, fine as thread and loosely twisted. This shape gives the tea its name; biluochun means “green snail of spring.”

As it gives up its moisture, the tea begins to exude a fresh, flowery scent, reminding me of the interior of a florist’s shop. After 30 or 40 minutes of firing, the round leaves are reduced to an eighth of their fresh weight. This year, for all their labor, the Shi family will produce five and a half pounds of this completely handmade tea. All of it will go to Lock Cha in Hong Kong, and fetch them about $515. The fruit orchards remain the family’s main source of income, but the money from the tea crop fills in when the trees are not producing—and so they repeat this painstaking process year after year.

When Shi Zhi-xing finishes her work, one of the younger Shi daughters fetches water from their well, and we infuse the new tea in kitchen glasses that are gaily decorated with floral decals. The greenish-yellow liquor, slightly cloudy from the protein in the leaves, and with fine hairs floating on the surface, has a delicate full flavor. The infusion is rich with the voices of young girls under the fruit trees, the coolness of fresh water drawn from a well in a battered metal bucket, and the brilliance of yellow rape blossoms and green rice shoots. It leaves a sweet aftertaste that lingers under my tongue all the way home.