We get dozens of cookbooks each week at SAVEUR, and every month we share our favorite new releases—books that, through one avenue of greatness or another, have earned a place on our over-stuffed shelves. This month’s books inspire fresh, nourishing spring cooking, give us a new appreciation for the spices in our cabinet, invite us to bring on the heat, and shed new light on the culinary habits of some of our favorite literary figures. 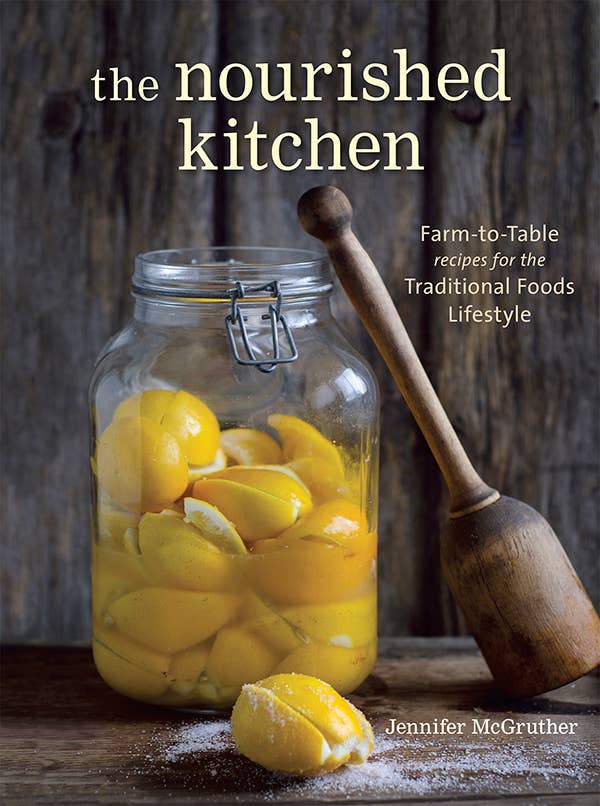 by Jennifer McGruther
I grew up eating food either burned or bland, but what my mother lacked in culinary imagination she made up for in a dedicated pursuit of nutrition; she shopped organic before it was a trend and we drank raw milk until the cops shut down the co-op. I've since learned a thing or two about preparing palatable food, but Mom's lessons about beneficial bacteria, healthy fats, and whole foods have stuck with me. For that reason, I'm grateful for such a beautiful and well-organized resource as The Nourished Kitchen with its focus on traditional methods and foods like fermenting, nose-to-tail cooking, whole grains, and seasonal vegetables. This spring I'll try my hand at projects like brine-pickled garlic scapes and brown soda bread with whiskey-soaked currants, or, for a weeknight, an easy entrée like pan-seared halibut with "melted" cherry tomatoes and fresh tarragon. In addition to all of The Nourished Kitchen's enticing recipes, I'm a big fan of the book's type, design, and comforting paperback heft. This one's a keeper—I'm even thinking about buying Mom a copy. —Zoe Schaeffer 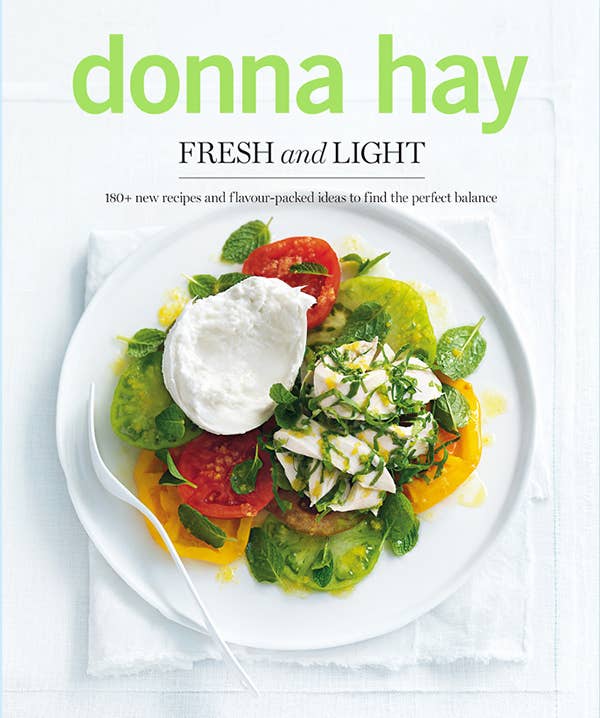 by Donna Hay
Working in an office with a test kitchen—and all the snacking and tastings that come along with that—means that at the end of the day, I'm rarely interested in cooking anything heavy, involved, or rich. While I'm certainly not a dieter (and as a longtime fan of her baking recipes, I can assure you, neither is Australian culinary icon Donna Hay), I can really appreciate this collection of light, quick, appealing dishes. Organized by type of meal (breakfast, lunch, dinner, dessert, snacks, and basics), Fresh and Light gives you 180 recipes with full page, color photography in classic Donna Hay style (minimalist, beautiful, mouthwatering). On my first read, I bookmarked at least 50 recipes I wanted to come back to—lentil falafel, kale slaw with fennel and buttermilk dressing, a polenta and tomato tart, miso cod with edamame—and found springboards for my own ideas in her roundups of basic recipe variations. While the recipe themes may be familiar, Hay's instructions are unmatched in their simplicity, and she has great suggestions for creating lighter versions of standbys. A quick dinner of zucchini and feta frittata with lemon zest and dill came together in minutes, satisfying both myself and my vegetarian flatmate. Hay's banana "ice cream" (actually just puréed frozen bananas combined with yogurt and maple syrup and re-frozen) is a new obsession in our apartment; we're already dreaming up different add-ins like dried dates, fresh figs, or walnuts for next time. Available now for the first time in the U.S., Fresh and Light is poised to enter the regular rotation of weekday cooking. —Cory Baldwin

Available from Harper Collins, $29.99
Buy Fresh and Light on Amazon 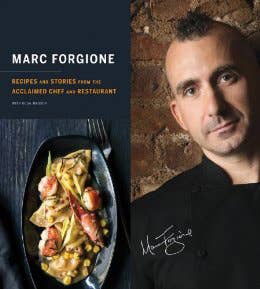 Marc Forgione: Recipes and Stories from the Acclaimed Chef and RestaurantSHOP NOW

by Marc Forgione and Olga Massov
Marc Forgione debuts his first cookbook, a self-titled tome that pays homage to his first restaurant, by opening with a memoir of sorts: an honest account for the ups-and-downs in his career, the scandalous Ron Leiber-gate, and his success from Iron Chef. What follows is a big, fat encyclopedia of New York City restaurant-style recipes that will delight any aspiring chef. At first glance the book may appear intimidating, even for a seasoned cook, with its recipes with mile-long lists of ingredients; the extensive how-to on skinning, filleting and deboning a whole fish; and the chapter devoted entirely to butcher's cuts. But under Forgione's careful tutelage, I found myself acclimating to his technique-driven recipes. I was rewarded handsomely for my efforts when I chose to make the restaurant's beloved chicken under a brick (mostly because I had the ingredients on hand, including an actual brick on my back patio). A ho-hum piece of poultry was transformed into a wildly fragrant, herbaceous, crispy dish; the best piece of bird I've ever tasted. I plan to use my next leisurely Saturday tackling the salt-crusted rack of lamb—a sure-to-be stunner for an upcoming dinner party. Marc Forgione may be a bit ambitious, but it's carefully crafted and peppered with rich stories to accompany each recipe. This is exactly the cookbook I'll page though when I'm looking to truly impress. —Anne Roderique-Jones

Available April 29 from Houghton Mifflin Harcourt; $40
Buy Marc Forgione: Recipes and Stories from the Acclaimed Chef and Restaurant on Amazon 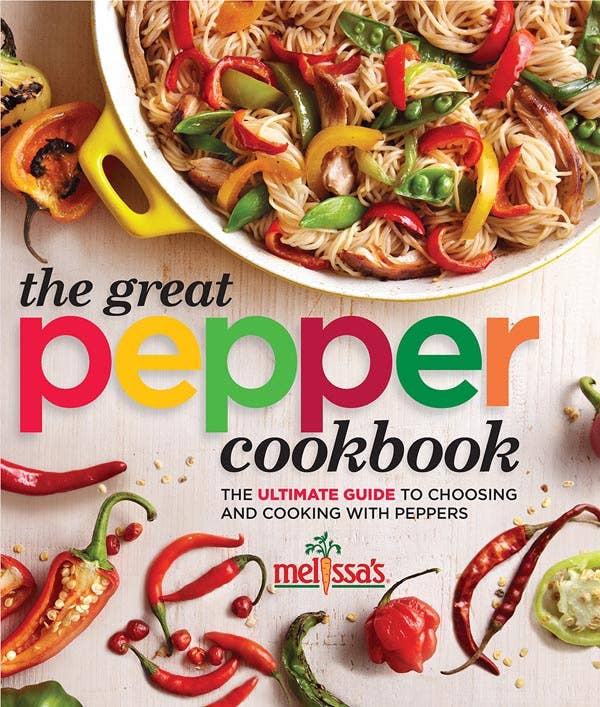 _ By Melissa's_
I strive to buy locally, eat sustainably, and treat our ingredients with reverence. I've listened as growers at our local farmers' market whisper in hushed tones how best to roast heirloom beets, pickle garlic scapes, and fold the juiciest Italian plums into a flaky croustada. So when it comes to cooking with chile peppers—from sweet, pointy-tipped fresnos to the blisteringly hot bhut jolokia—I put my stake in the team at Melissa's Produce in Los Angeles, California. Within the 256 rainbow-hued pages of The Great Pepper Cookbook (Oxmoor House; 2014), we are granted a comprehensive visual glossary of fresh and dried chiles including seasonal availability, tasting notes, and the often bewildering Scoville heat units (SHUs)—a test pioneered in 1912 by Connecticut pharmacist Wilbur Scoville that determines the range of capsaicinoid compounds in peppers—beloved stoplight bells don't even register, jalapenos land somewhere in the middle, and the deadliest, Guinness World Record–holder is the scorpion. Chapters on fresh and dried pepper prep are followed by dishes such as shishito-sauced French toast, Genovese-inspired tepin chile-basil pesto, and an earthy three-pepper beef barbacoa. A glass of milk will surely calm the finale of truly evil ancho and cayenne-spiced devils' food cake.—Kellie Evans

by Gary Paul Nabhan
I love the ritual of shopping for spices: navigating the cramped aisles, breathing the hot-and-sweet-smelling air and choosing plump bags of cardamom pods, slender vanilla beans, and heavy glass bottles of rose water. Recently, I picked up a book that helped me to understand this ritual with much more depth. Richly embroidered with detail, Cumin, Camels, and Caravans by scholar Gary Paul Nabhan is part history, part geography, part cookbook, and part travel memoir. The reader follows Nabhan on his travels, both physically and academically, as he seeks to understand the "original" globalisation: the spice trade. Interspersed with recipes from various stops on historical spice routes, Nabhan discusses the botany, linguistic history, and trade history of each substance, but far from being dry accounts, they bring the wonder of many ingredients we now view as commonplace into focus; Nabhan's painstaking research has not eclipsed an evident natural knack for storytelling. —Kaylee Hammonds 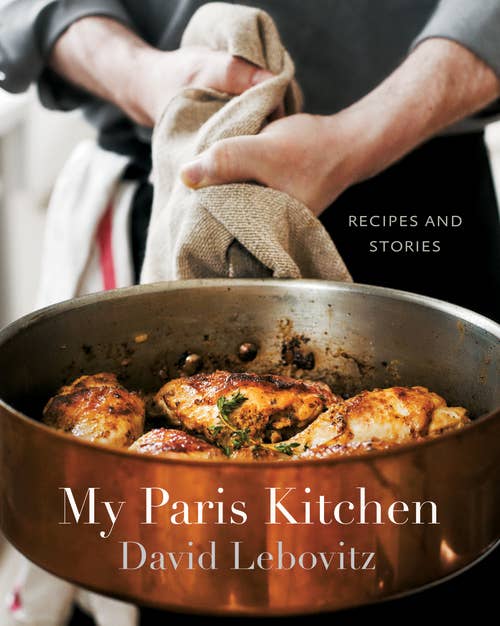 By David Lebovitz
Ten years ago, David Lebovitz, then a professional cook who'd put in 13 years at Chez Panisse, moved to Paris with little more than his laptop and a cast-iron skillet. Over the course of the subsequent decade, he became one of the most popular food bloggers on the planet and the author of several excellent cookbooks. His latest, My Paris Kitchen, is an especially personal work, with eclectic recipes unified by Lebovitz's musings on the pleasures and quirks of living, cooking, and eating in Paris. Some dishes were gathered from friends and relatives, such as the winter salad of crisp endive batons in a yogurt-and-Roquefort dressing from his French partner's late father; others from the French capital's immigrant neighborhoods, such as the beautifully blistered, flaky naan, brushed with garlic butter, with a melting center of Laughing Cow cheese from an Indian quartier. The desserts, too, run the gamut from homely duck fat cookies to a favorite bistro's show-stopping warm chocolate cake paired with salted caramel sauce. The first weekend I had the book in my hands, I made the poulet à la moutarde, juicy chicken thighs swimming in a white wine and mustard sauce, for dinner, and tart salée—quiche's considerably richer cousin, with a luscious, cheesecake-like body studded with ham, blue cheese, and chunks of pear—for brunch the next day. Neither dish lasted long enough for work-week leftovers, but no matter: My Paris Kitchen is an irresistible invitation to keep cooking. _—Karen Shimizu

By Susan Howson, Kate Bredimus, Chris Gatewood, and Carrie Fleck Walters
I lived in Richmond, Virginia for most of my twenties and still have a soft spot for the place, so when 804ork, a cookbook focused on Richmond and its cuisine (the name is a reference to the area code), came across my desk I was delighted. The book confirms what I always knew in my heart to be true: Richmond is a great food town. Half catalogue of the city's restaurant scene, half recipe collection, 804ork is a beautifully designed look at the Virginia capital's culinary landscape, spotlighting both restaurants that have been around forever, like Millie's Diner, as well as relative newcomers to the scene such as Rappahannock, Proper Pie Co., and The Magpie, with several recipes from each. The recipes themselves run the gamut, too; the expected Southern classics are here, including Comfort's addictive pimento cheese and a fried green tomato and blue crab salad from Lemaire, but there are also some dishes you may not immediately associate with Richmond, such as a spicy bamboo fish dish from Sichuan chef Peter Chang. _804ork_is__a 226-page ode to the city and an inside look at some of my favorite places in the world to eat. _—Laura Sant 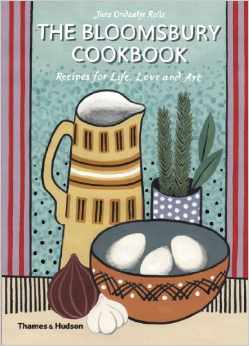 The Bloomsbury Cookbook: Recipes for Life, Love and ArtSHOP NOW

By Jans Ondaatje Rolls
The Bloomsbury Group was known for many things—art, literature, affairs of the heart—but not necessarily for what they ate. That is, until this fascinating book came along. Food writer Jans Ondaatje Rolls (author of Chester Chowder and Bosham Bisque) spent five years scouring shopping lists, letters, and other original documents for clues to the eating habits of Britain's famous circle of intellectuals. Figures such as Virginia Woolf, Vanessa Bell, Lytton Strachey, Duncan Grant, and Dora Carrington come alive not just as writers and artists, but as people who enjoyed cooking, dining, and drinking together. The book seamlessly weaves together history, recipes, hand-written notes, and liberal quotes from the characters involved for a unique literary and culinary feast. Proceeds go to the Charleston Trust, which is dedicated to the preservation of the house of the Bloomsbury artists.—Camille Rankin