Kombu, an essential Japanese ingredient, brings depth of flavor to all kinds of dishes 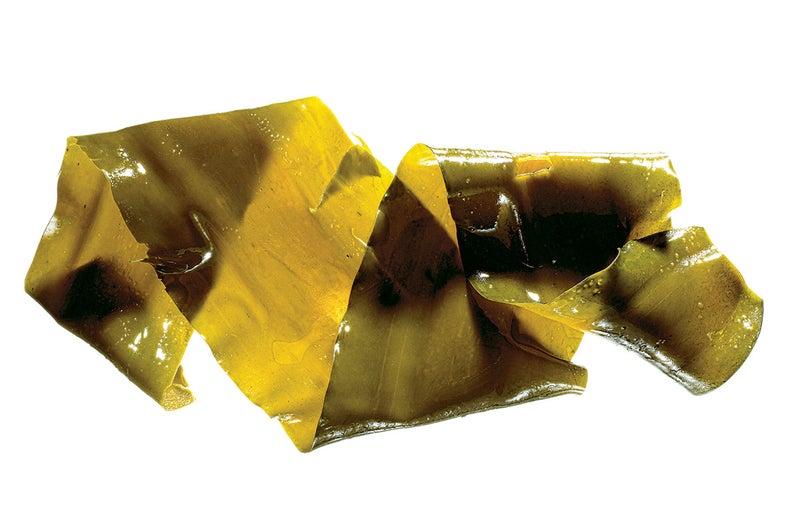 When I was growing up in Tokyo, my mother would start every day with the same ritual. Each morning she would heat a pot of water, then slip in stiff, dried leaves of kombu, an edible Japanese seaweed, which she simmered until the water turned golden and a gentle, briny aroma filled the kitchen. The broth, with its mild umami flavor, was a constant presence in our home. My mother ladled it into virtually everything: tori no mizutaki, a hot pot of chicken; chawanmushi, a delicate, savory egg custard; and her favorite, yudofu, a block of soft, fresh tofu warmed in kombu stock.

Though it has very little flavor on its own, ranging in taste from mildly saline to sweetly vegetal, kombu broth has the remarkable effect of accentuating the flavors, and the sheer deliciousness, of anything cooked in it, magically making each ingredient taste like the most potent version of itself. This flavor-boosting power comes from glutamate, the molecule responsible for the savory “fifth taste,” umami. In fact, scientists first identified umami while studying edible kelp, which has the highest known concentration of glutamate on the planet.

No wonder the Japanese have been cooking with kelp for more than a millennium; its earliest documented use dates back to the 800s. Today it is most popular in dashi, an enhanced stock for which katsuobushi—flakes of dried skipjack tuna—or dried shiitake mushrooms are steeped with kombu, activating the umami compound.

Most of Japan’s kombu is farmed along the 2,671-mile coast of Hokkaido, the country’s northernmost island. It’s pulled from the ocean in late summer and laid out to dry in the sun. After four days, the leaves’ frilled edges are trimmed. Then the leaves dry for one month more before they’re sent to stores, long rigid ribbons of brownish green.

For most of my life, I used kombu the way my mother did, almost without thinking. Subtle but indispensable, it was as essential to our lives as air. Then, in 1999, I moved to New York.

My mother warned me that I might not be able to find kombu in the States, so I brought it with me, lining my suitcase with layers of dried kelp. At first, I just used it in traditional Japanese preparations, but after a few years, I began to see new possibilities.

One day, I decided to try kombu stock to braise short ribs and root vegetables. The result was intensely beefy, but somehow still lighter and cleaner in flavor than if I’d used a meat-based stock. From then on, the opportunities seemed endless. It was a natural fit for poaching fish, as it accentuated the fresh, oceanic flavors. Paired with shiitakes, it heightened the mushrooms’ earthy notes. And in a simple puréed zucchini soup, the stock elevated and unified subtle flavors, just as it had for my mother’s yudofu.

In addition to yielding extraordinary stock, kombu leaves make a great condiment. Simmered, shredded kelp tossed with soy sauce, sesame seeds, and brown sugar becomes kombu tsukudani. Pungent and salty-sweet, it’s wonderful alongside white rice or as a snack with beer or sake. I have also taken to adding strands of kombu to vinegar to amp up brine for pickled radishes. The more I cook with it, the more I realize how versatile it is. Today, I have found equal footing in Western and Japanese cooking, and kombu plays a central role in both.

It also turns out that I needn’t have worried about locating the ingredient in the United States. Though makombu, the highest grade of kombu, can be hard to find, I recently discovered a finely shredded makombu made by the venerable Matsumaeya Company, which has been producing kelp in Osaka since 1912. The shredded makombu releases more flavor and is easier to store and to work with than the large fronds I was accustomed to. I immediately sent a packet to my mother in Tokyo. She loved it even more than I had, and, after finishing the bag, scoured her neighborhood shops for more, only to learn that the product was not available in Japan. I now send shredded makombu—harvested in Hokkaido, processed in Osaka, and distributed in the U.S.—back around the world to her, chuckling each time at the twist of fate that has brought my relationship with this ingredient full circle.

Hiroko Shimbo is the author of Hiroko’s American Kitchen_ (Andrews McMeel, 2012). Her most recent article for_ SAVEUR was “Chawanmushi” (October 2012).