There is perhaps no Asian ingredient celebrated more than soy sauce. While its over 2,000-year-old original recipe is surprisingly simple, soy sauce’s modernized range in preparation techniques can make its umami flavors as nuanced as a glass of wine.

It may be your instinct to grab the first bottle you see while shopping, but it’s important to know that there is a world of soy sauce options at your fingertips. The salty condiment originated in China, but countries like Japan, Korea, and Indonesia have also adapted their own iterations (shoyu, ganjang, and kecap manis, respectively) to complement indigenous dishes. These iterations have inspired even more specific varieties like light (generally used for dipping) and dark (generally used for cooking), as well as a range of aging methods, fermentation practices, and ingredient additions (e.g., ponzu sauce’s notes of citrus) to take traditional soy sauce one step further.

Since most mainstream options will likely be sourced from China or Japan, we’ve combed through what’s accessible in the U.S. and picked the best soy sauces that grocery stores (and sites like Amazon) have to offer. We also tapped Hetty Lui McKinnon, cook and author of To Asia, With Love, for her expert advice in selecting, cooking, and storing the beloved pantry staple. 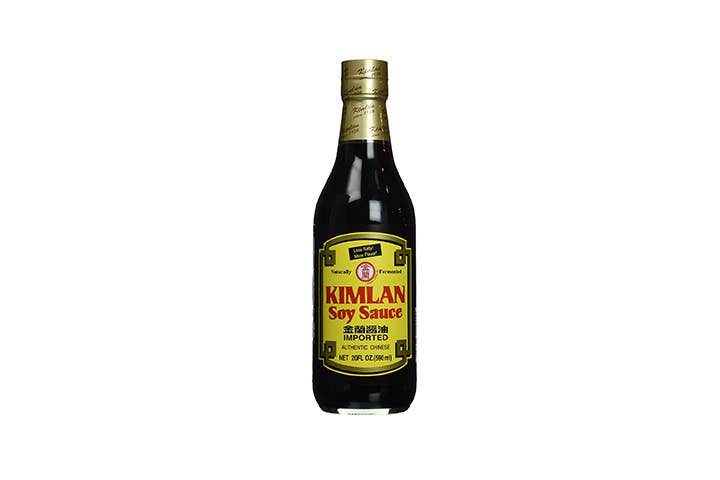 Why we chose it: A blend of only five fermented ingredients makes this one of the most authentic on the market.

If you’re searching for a soy sauce that really pays homage to the condiment’s history, versatility, and umami flavor profile, look no further than Kimlan’s: the most authentic variety of the bunch with its short list of traditional ingredients (soybeans, water, salt, and a fermenting agent). You can dash this bottle on practically anything for an extra punch of salt or to intensify the complexities of a dish’s various flavor elements. There is also a slight addition of sugar that brings an added sweetness and makes the sauce more well-rounded. We highly recommend keeping this on hand to zhuzh up even the most basic of entrees like grilled chicken and steamed broccoli—you don’t need much to take any food from drab to fab in no time. 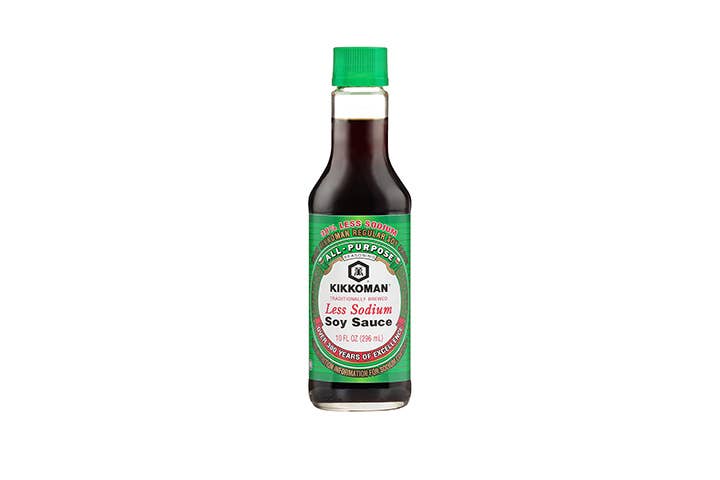 Why we chose it: Kikkoman’s “less sodium” option proves why it has become a tabletop staple at Asian restaurants around the country.

If it ain’t broke, don’t fix it. The same expression applies to the Kikkoman brand of soy sauce, which has been brewing their recipe for over 100 years. We’re huge fans of this lower sodium option (38 percent less than Kikkoman Regular Soy Sauce), which still preserves the coveted brine in a signature (and affordable!) green-capped glass bottle. This is a wonderful buy for anyone watching their sodium intake and, frankly, should become a pantry staple to pair with all of your favorite rice, fish, and vegetable dishes.

Why we chose it: A little goes a long way with this bold dark soy sauce that will elevate any Asian-inspired meal.

Thicker dark soy sauces are generally used to add more flavor and color to a dish while their lighter counterparts are poured into dishes for dipping. Lee Kum Kee’s dark variety not only kicks dishes like stir-fry up a notch, but it also adds a velvety richness to every bite. We particularly enjoy this brand on silken tofu—not only does the plant-based protein soak up the sauce, but it creates a glaze over high heat that makes it both a flavor and texture home run. Toss in some bok choy, baby corn, and shiitake mushrooms and you’ll have yourself a feast. 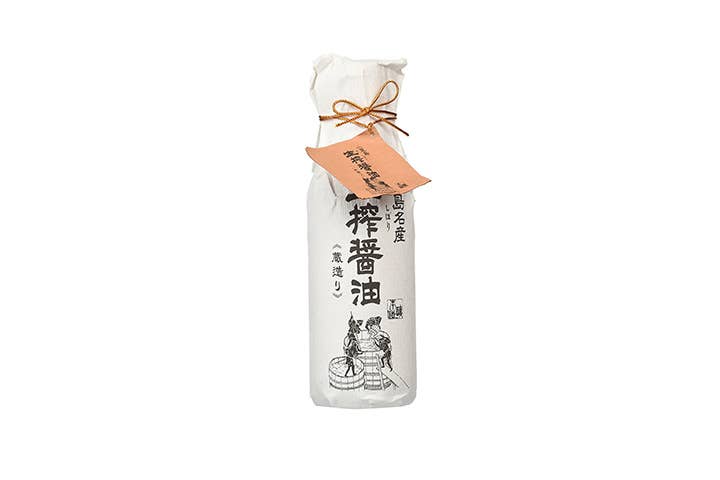 Why we chose it: The taste of barrel-aged Kishibori Shoyu is as special as its packaging.

Shoyu is the Japanese word for soy sauce, which originally differentiated itself from Chinese varieties with the addition of wheat. It’s also the type you’re used to buying in stores (e.g. Kikkoman). While many may think this Kishibori brand is a bit too salty for their liking, we found the taste to be balanced and the texture to be soft and luxurious. There is also a boldness and complexity derived from its aging process that uses 100 year-old barrels to impart oakiness. Its parent company, Takesan, is also located on the 60 square mile island of Shodoshima in the Seto Inland Sea. The sea salt used in preparation is actually sourced and harvested from the region, making the product one of the most authentic on this list. 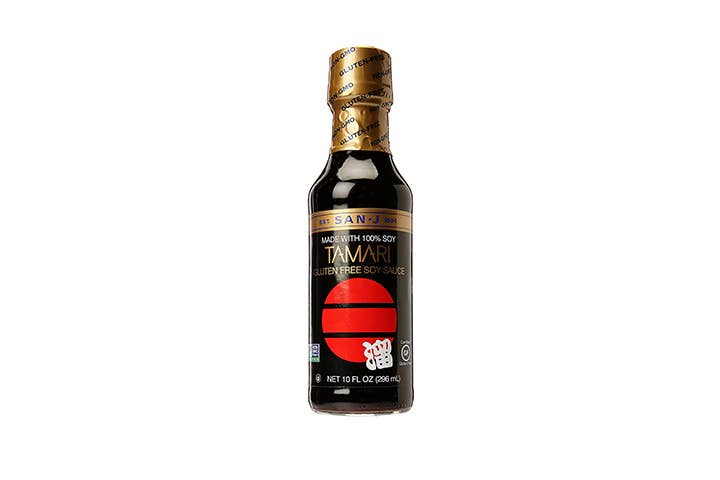 Why we chose it: San-J Tamari packs an umami punch, making it a wonderful (and gluten-free!) purchase that will last you a while.

If you’re gluten intolerant or sensitive, tamari will be the go-to seasoning for all of your Asian cooking. That said, San-J’s recipe is quite bold and salty, so you’ll really want to eyeball its use at first to prevent overdoing it. The good news is that this already-affordable bottle can last you for a long time, making it a product that is not just delicious, but also economical. Test it in a bowl of rice or paired with sushi so you can get a better sense of the amount that will work for you and your needs. 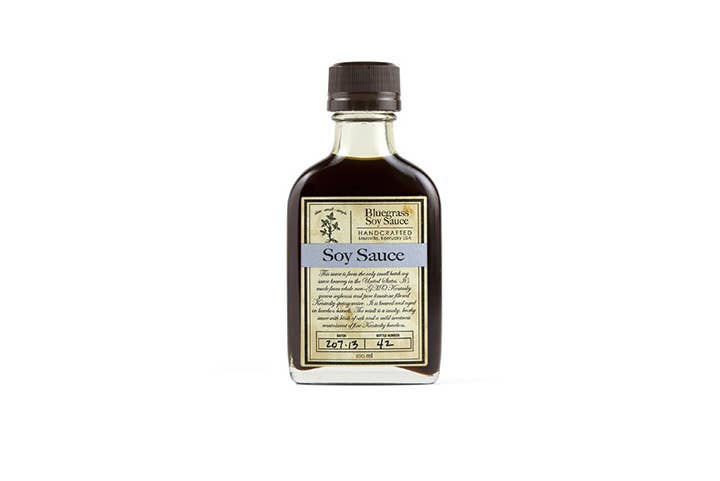 Why we chose it: Aged in Kentucky bourbon barrels, this small-batch, micro-brewed soy sauce makes a lasting impression.

We weren’t entirely sure what to think before sampling this U.S.-based product, but Bluegrass far exceeded our expectations. The oaky flavor lends itself exceptionally to proteins like beef and salmon that shine when infused with a bit of smoke, but perhaps the most entertaining discovery was to pair these dishes with oak-aged adult beverages like bourbon or chardonnay. They obviously share similar flavor profiles, so it was fun to explore how the food and drink interacted on the palate.

With so many soy sauce options to choose from, it was important for us to limit our focus to accessible Chinese and Japanese varieties. We then polled notable Asian-American chefs and cooks in the industry for a short list of contenders, tasking them to provide a list of options that excelled at specific things (e.g. used for cooking vs. a dipping sauce, value, uniqueness, versatility, traditional, etc.) From there, we conducted a blind taste test with nearly a dozen bottles and ranked our favorites. Naturally, the stand-outs represented the best of the best in categories that appeal to different shoppers.

Features to Keep in Mind When Shopping

As discussed earlier, soy sauce ingredients vary depending on region but are generally made from soybeans, wheat, water, salt, and a fermenting agent (typically koji, a mold grown on soybeans or rice, or a lactic acid bacteria). Soy sauce originated in China and initially did not contain wheat. Beyond standard mainstream varieties, soy sauces can also be light, dark, or infused with other ingredients to alter its flavor.

Most mainstream soy sauces are aged 5 to 8 months, though artisanal iterations may be aged much longer to yield thicker, more complex products. You can think of the process like wine or balsamic vinegar—the ingredient quality, aging length, and environment will all affect and influence the outcome.

While many soy sauces utilize organic soybeans and wheat, it’s important to look for the word “organic” on labels to ensure that you are getting what you pay for. Another buzzword is “non-GMO,” which prohibits the use of ingredients that have been genetically modified to tolerate the heaviest doses of herbicides and pesticides, but doesn’t necessarily imply that the product is organic.

“Soy sauce is fundamental to the flavors of my youth, to Chinese and Asian dishes,” says Hetty McKinnon. “It is a foundational ingredient, thought of in the way that some cultures may view olive oil or a particular spice.”

We chatted with the renowned cookbook author and food writer to get her take on popular soy sauce questions from the community. Here’s what she had to say:

Q: Can soy sauce go bad and do I need to keep it refrigerated?

“I've never known soy sauce to go bad! It is a fermented product. I do not store my soy sauce in the fridge. I keep it in my pantry.”

Q: Is there anything that can be a good substitute for a soy sauce?

“There are lots of substitutes on the market nowadays. There's tamari, which is great if you are gluten-free. It is a byproduct from the production of miso paste. It has a rich flavor, but is perhaps more nuanced. It is my favorite substitute for soy sauce. There is also liquid and coconut aminos which are soy-free alternatives. I usually have all of these in my pantry, and use them interchangeably.”

Q: What is the difference between light and dark soy sauce?

According to Kikkoman: “During the fermentation process, the wheat starches are broken down to sugars and part of the sugar is changed into alcohol. The alcohol adds to the aroma and overall flavor of soy sauce. The product contains approximately 1.5-2% alcohol by volume.”

Despite Kimlan Soy Sauce earning top accolades, you really can’t go wrong with any of the bottles on this list. In fact, they all excel and shine in different areas so that a soy sauce collection will feel less like a pantry space waster and more like a necessity. Treat and store your products like you would a wine and that should help to justify the cost of your newfound condiment obsession.