I’ve had the same wok in my kitchen for years and years, and I love it, using it for everything from stir-frying to steaming bao to deep-frying. I’d say I have a good amount of experience with using woks, but I also realize there’s always more to learn about any kitchen tool. When I got this assignment, I reached out to Justin Lee, chef and owner of Fat Choy in New York City, to pick his brain on key things to consider when choosing the best wok. There are some big differences in what a chef would want for a professional kitchen versus what makes sense for home cooks, all of which are covered below.

Testing these woks was a pretty straightforward process. When necessary, I seasoned the woks myself and then made a simple stir-fry. Through the cooking process, I took note of how much the protein stuck to the bottom and sides of the wok. “You want it to stick a little bit,” says Lee. “Otherwise you’re missing the point of the wok, which is using the full surface area to cook a lot of food quickly.”

The best woks let the protein stick to the sides enough to get a good sear but easily release it with a quick swipe of the spatula. I also paid attention to how quickly each stir-fry came together. A good wok will stay ripping hot through the cooking process, making short work of anything you throw in it. Stir-frying is meant to be a fast cooking method: If the wok cools significantly and has to reheat every time you add an ingredient, that’s no good. I also paid attention to how comfortable the handle was to hold while cooking and tossing my stir-fry.

Once I was done cooking and the wok had cooled, I washed it according to the manufacturer’s instructions. A well-seasoned wok should come clean pretty easily without a ton of hard, stuck-on bits. I also used each wok to steam veggies with a bamboo steamer basket, which I thought might be a deciding factor. However, all of the woks I tested performed this task equally well. Here are the results of those tests.

Features to Keep in Mind When Shopping for Woks

“You want something lightweight for a home kitchen,” says Lee. “We use heavy-duty cast iron in the restaurant, but home cooks should look for lighter materials like carbon steel.”

“All of the woks in our restaurant are round-bottom,” Lee says. “And unless you have a wok ring solidly attached to your burner at home, which is something I’ve never seen, you should use a flat-bottom wok in a home kitchen. Otherwise that wok ring is just going to be slipping around all over the place.”

As I mentioned, a well-seasoned wok should be a breeze to clean. The best woks required fairly minimal scrubbing, if any. Carbon steel should be treated similarly to cast iron—dried thoroughly after washing, and coated with a thin layer of oil. When in doubt, though, consult the manufacturer’s instructions. 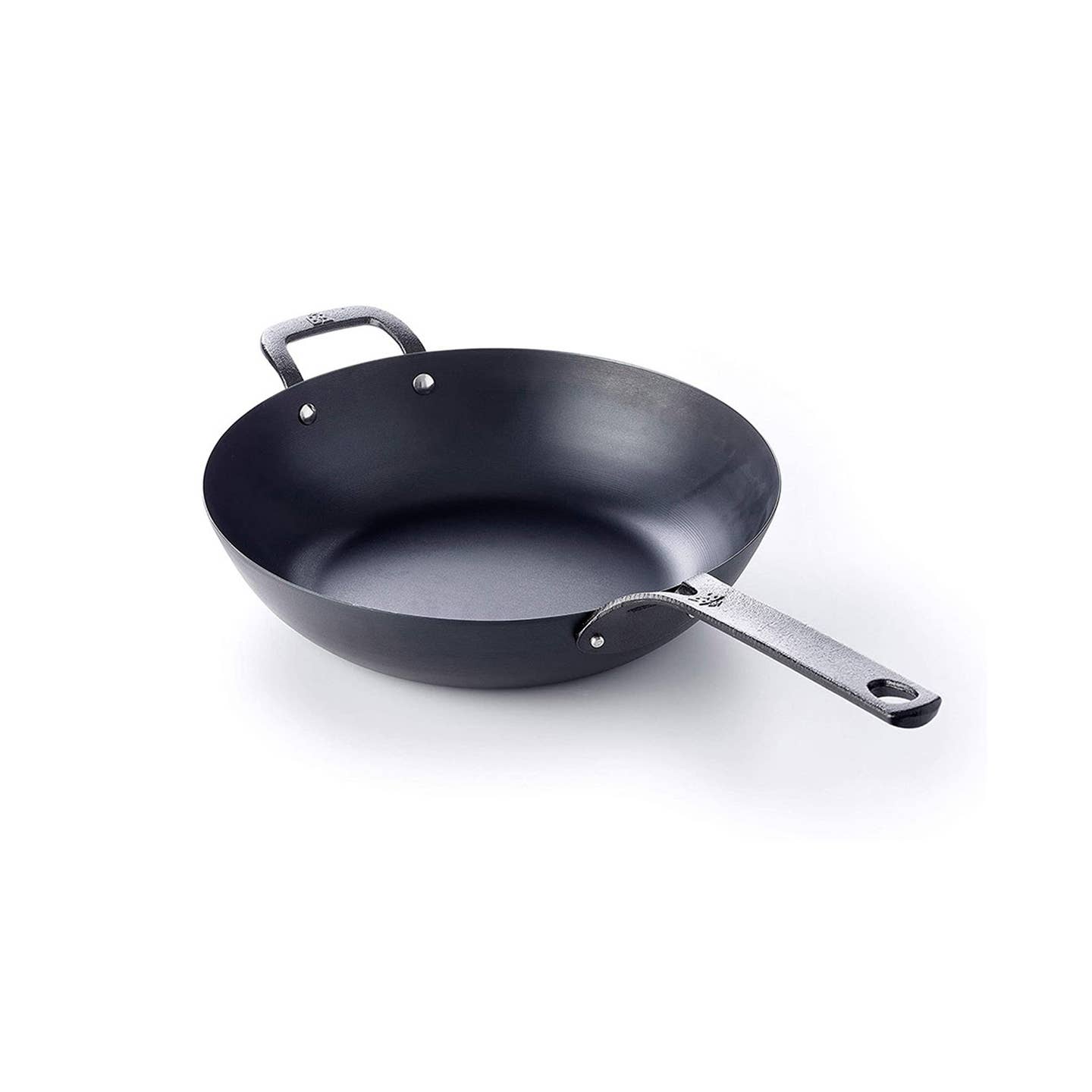 I’d never used a pre-seasoned wok before, and I was so blown away by the cooking surface on this model. It felt super slick when I was washing it, like a nonstick skillet. But when it came to the cooking test, this wok did everything I wanted it to. The protein stuck just enough to the sides that I was able to fit over a pound of thinly chopped beef in a single layer on the bottom and sides of the wok with plenty of room to spare. The meat got a deep, dark sear after about a minute over a high flame, and the rest of the stir-fry came together in just a few minutes. The handle, despite being metal, was surprisingly comfortable to hold, and I could see myself making batch after batch of stir-fry without any fatigue. Once the wok had cooled, cleaning was simple. There were no stuck-on bits at all, even after cooking at such heat. Washing and drying only took about a minute, and then the wok was ready for the next task. It’s a bit pricier than an unseasoned wok, but well worth it, especially if you’re not confident about seasoning it yourself. That said, if you accidentally remove the seasoning—or a well-meaning guest runs your wok through the dishwasher—BK provides instructions on how to reseason. 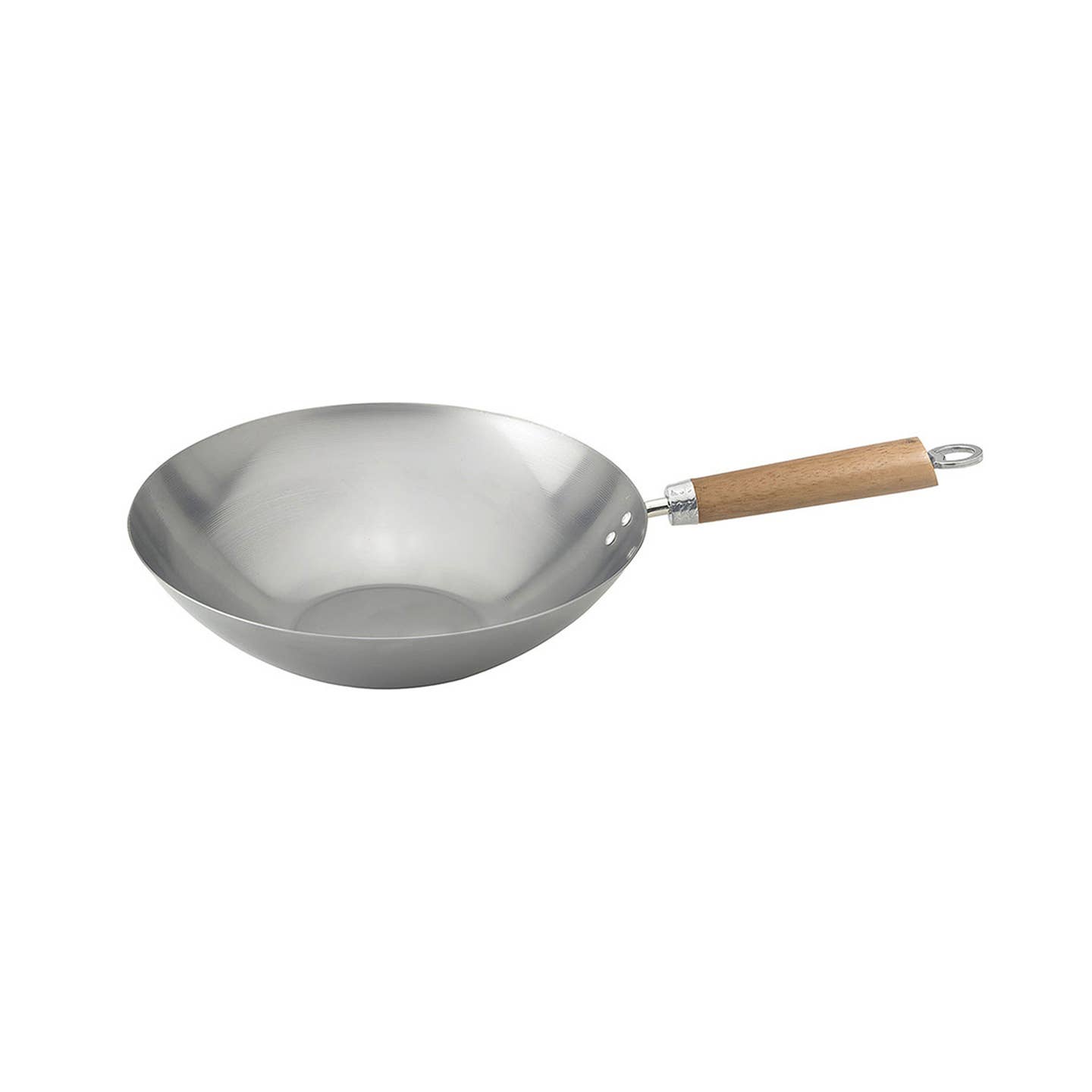 I talked to Lee at length about pre-seasoned vs. unseasoned woks. “Pre-seasoned makes sense for home cooks,” he says. And I tend to agree. I’ve seasoned lots of pans in my day, including my wok, and it takes some practice to really do it right. It can also be a pretty smelly process, since you’re spending 10 to 20 minutes essentially burning oil. Personally, though, I love the ritual of seasoning my own pans. “If you enjoy the ceremony of seasoning things yourself, go for unseasoned over preseasoned,” Lee says. All of this to say that this wok performed almost exactly as well, from cooking to cleaning, as my Best Overall pick, with a more comfortable round, wooden handle, but for about half the price. The trade-off is that you have to season it yourself, but we have a handy guide for that. 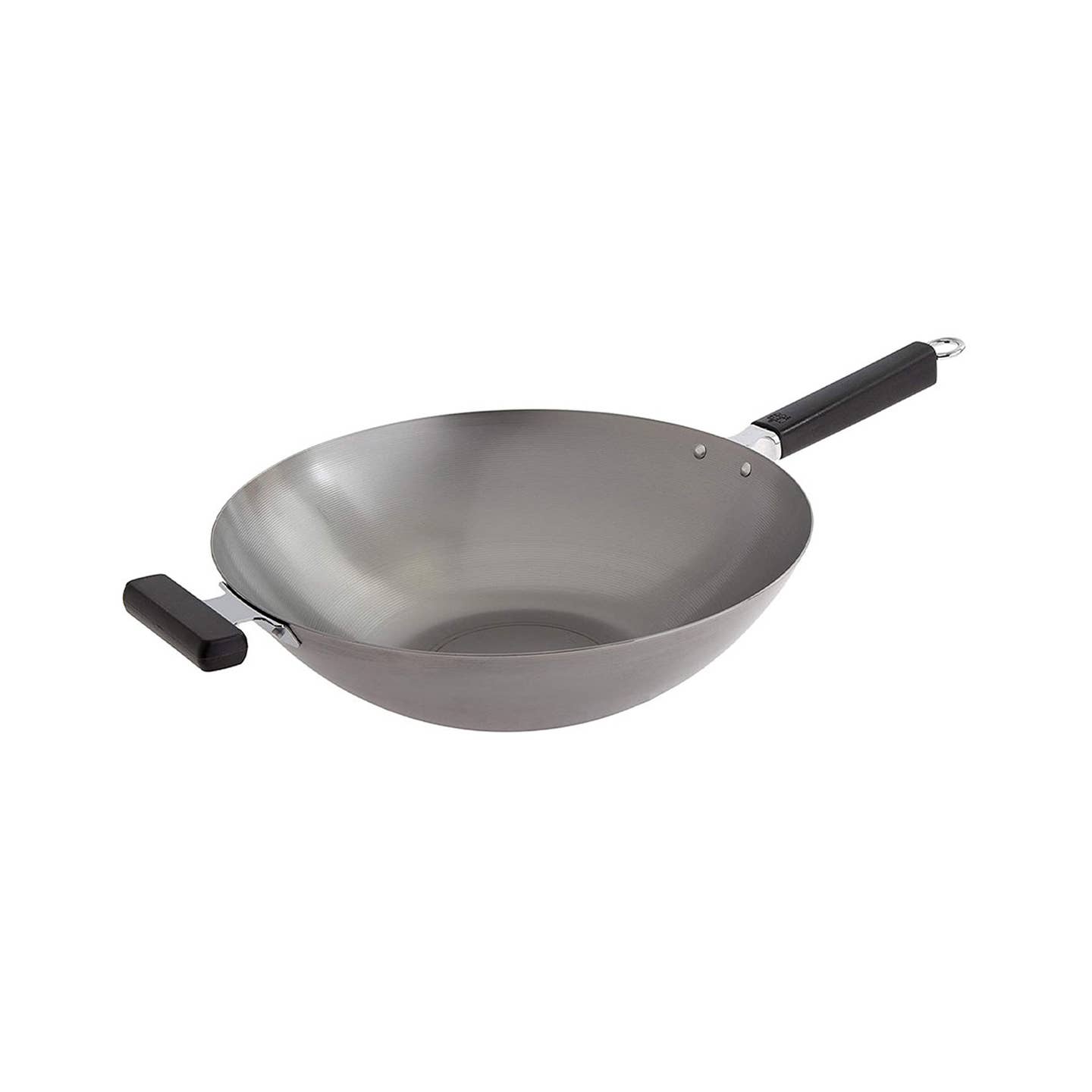 This is the wok I have in my home kitchen, and I love it. It’s huge, so it can handle food for a crowd of six or more. Like my other two top picks, it’s made of carbon steel, so it holds heat really well and evenly, no matter how many ingredients I load into it. The handle, made of hard plastic, is fairly comfortable to hold, even when the wok is chock-full. It’s also relatively inexpensive. Again, the trade-off is that you have to season this one yourself. 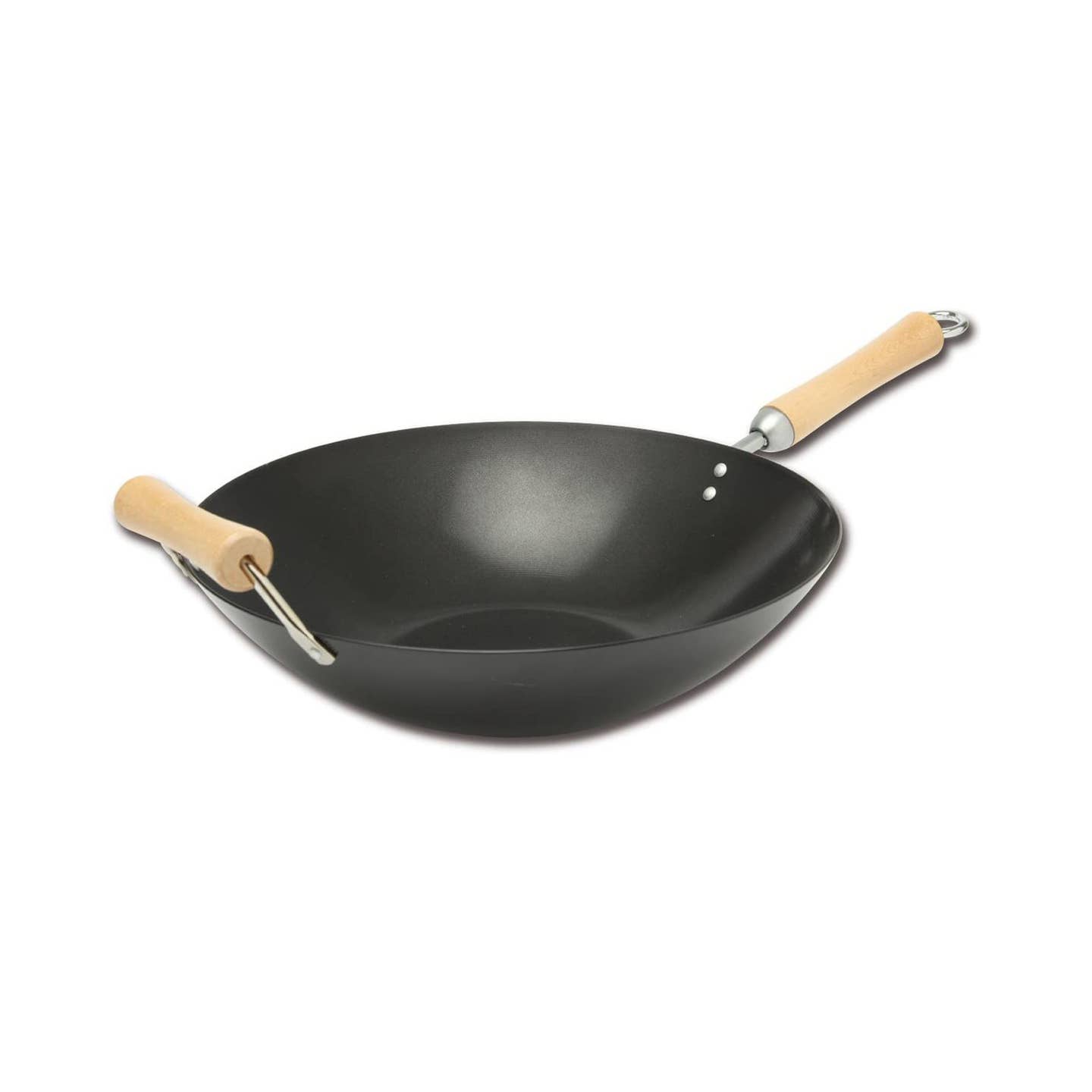 This wok was slick to a fault. I actually tested it a couple of times because I thought I messed up the first test by not getting it hot enough. The issue with nonstick is that it’s kind of antithetical to wok-cooking, which requires you to get the pan as absolutely screaming hot as your burner will allow. However, most nonstick pan manufacturers warn against overheating the pans, as it can damage the surface. So in my first test, I got the pan hot enough for the oil to shimmer before adding my protein, but it wouldn’t stick to the sides. Instead, it just slid down to the bottom in a pile that ended up taking too long to cook. Every time I added another ingredient, it felt like the pan cooled way down and then took forever to heat back up, so all of the food had a steamed quality to it. On the second test, I waited until the oil started smoking before adding my ingredients, but the results were the same. 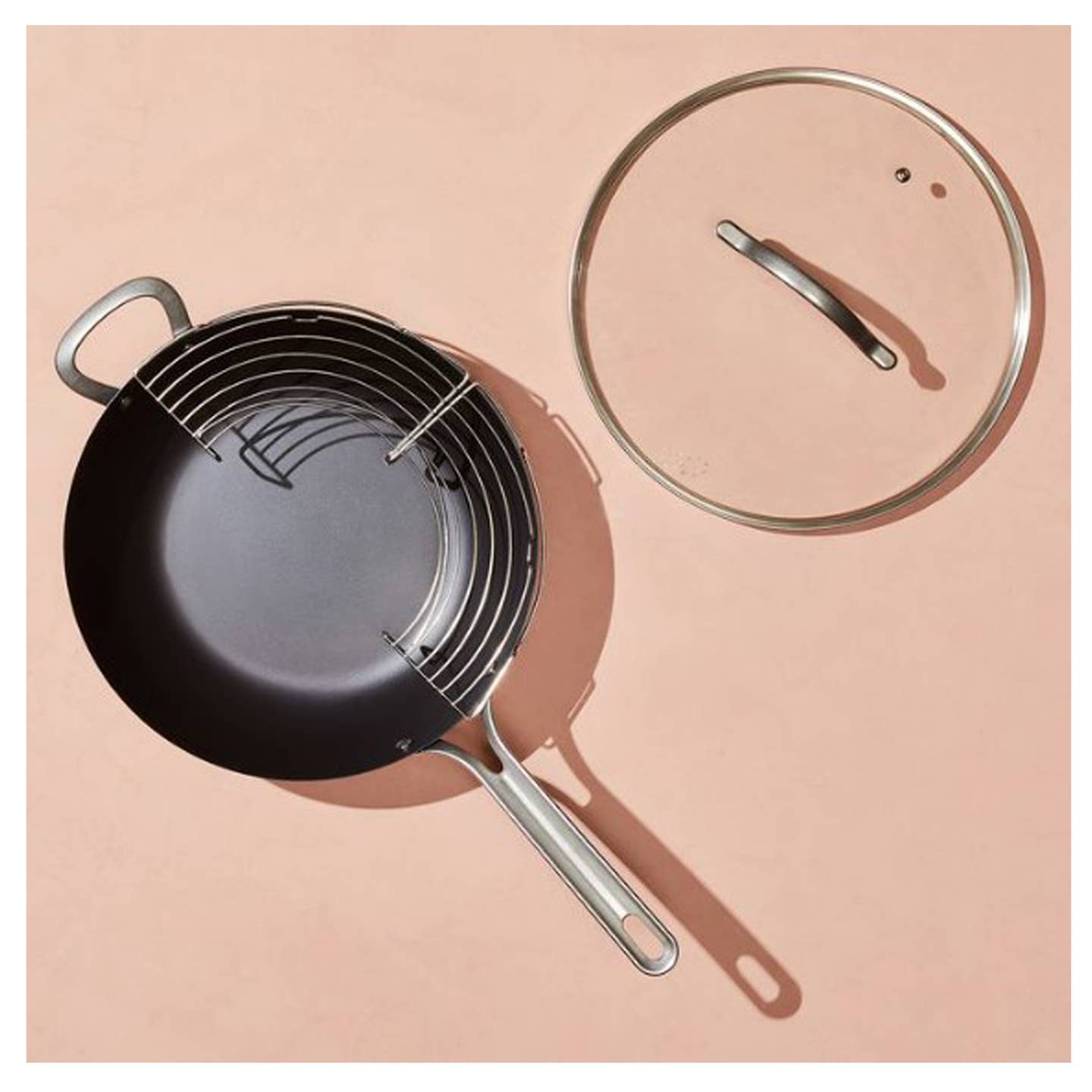 In terms of performance, this wok is identical to my Best Overall pick. In fact, it seems like almost exactly the same wok, but with a different handle. Unfortunately, the handle has raised ridges on the top that dug into my hand while I was trying to cook. As far as the wok, it’s great, but the handle is really uncomfortable. This model came with some cool accessories, like a rack you can set on the wok to drain fried foods, but nothing that justified the high cost. This model is about $50 more than my Best Overall pick.

Q: What kind of cooking utensils should I use with a wok?

“The old-school guys in Chinatown,” Lee starts, with a chuckle, “they all use the ladle. For a home cook, though, especially a beginner, the flat, spade-shaped spatula is great.”

Lee told me that the main thing he uses his home wok for is steaming. “They’re great for steaming—very economical in terms of water and energy used,” he says. “You just need one of those bamboo steamers. They’re like $6!”

The trouble with using woks at home versus a professional kitchen is that you’ll never quite achieve the same results as you get with a round-bottomed cast iron wok set over what is essentially a jet engine of a flame. But you can get pretty darn close with a carbon steel wok over your stove. You can even save yourself some money by learning how to season it yourself.