Inside An Chodye´ La: Where Soup is the Main Dish

On the island of Guadeloupe, there's a soup for every taste and occasion 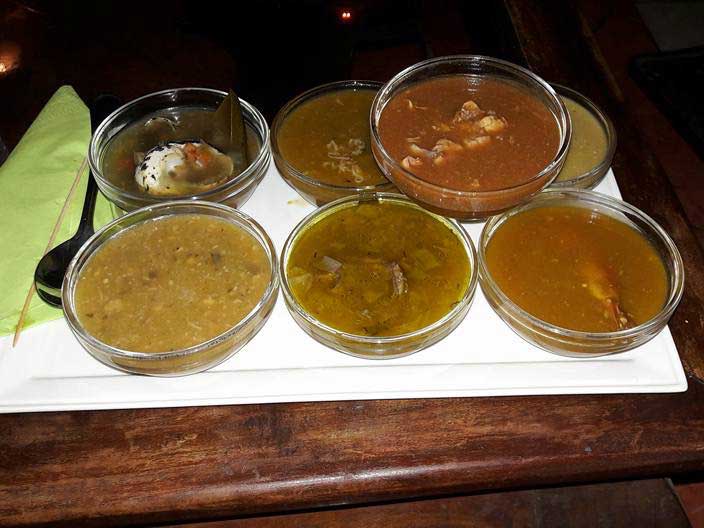 Across cultures, there’s something about a warm bowl of soup that warms your heart while it fills your stomach. On the French Caribbean island of Guadeloupe, soup is deeply intertwined with its Creole, African, and Indian roots ruled under the French. Whether from Colombo to Congo, there is a soup for every taste and every occasion. And in a small house on a narrow street in a quiet neighborhood in Pointe-a-Pitre, a man named Jean-Claude Magnat recreates his family soups for both locals and visitors looking for something good to eat. At An Chodye´ La (known on the island as Kaz a Soup), patrons are encouraged to sample everything from a savory lobster bisque-style delicacy to the hearty goat stew to its famous “Ouassous Giromon,” a thick, hearty soup made with pumpkin and river shrimp.

Every soup on the menu comes from a piece of Jean’s childhood and is rooted Creole Caribbean culture of the island. “Before slavery was abolished in Guadeloupe in 1848, soup was a very common dish for slaves,” he explains. “Back then it was mainly made out of leftovers. The housemaid would bring back leftovers from the master’s house at the end of the day and then the slaves would just throw everything they had in a big pot with water and let it boil for a while,” he said. “It has been called the ‘poor people’s meal’ because of what it meant back then, and how our ancestors came up with it.” But there is nothing poor about the flavor of Magnat’s creations.

Check Out Some of our Favorite Soup Recipes

The restaurant isn’t fancy. It looks comfortable and familiar, like walking into the home of a family member. In fact, the building is his grandmother’s house. It wasn’t until years after her death that he converted the first floor into a small restaurant. “There was no restaurant dedicated to soup from the islands, and my grandmother used to make the best of anyone,” he says. “These recipes mean a lot to me.”