What makes the nutmeg in Indonesia's tiny Banda archipelago so delicious? 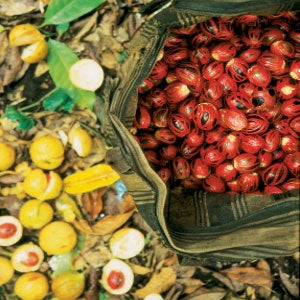 Though Banda’s nutmeg production is currently a fraction of what it was at its height, in the 17th century (most nutmeg is grown nowadays on the Caribbean island of Grenada and in other parts of Indonesia), the islands are still home to what many spice connoisseurs believe to be the world’s best-tasting variety. What makes it so delicious?

“Banda’s pala [nutmeg] has the highest percentage of volatile oil of any version of the spice,” says Ilyas Marzuki, a botanist from Indonesia’s Institut Pertanian Bogor, an agricultural university on Java, who is studying the local spice and whom I met on a recent trip to the islands. “According to my research, 50 percent of the seed is composed of volatile oil, while the mace is made up of slightly less. Compare nutmeg that comes from West Java—it contains only 10 percent volatile oil.” (Interestingly, nutmeg’s volatile oil contains chemicals that act as a hallucinogen on humans. If consumed in large enough quantities—usually about two whole seeds’ worth—nutmeg can induce LSD-style hallucinations. Perhaps what those Dutch nutmeg-seeking colonialists were really after was a good time.)

The resulting flavor characteristics of Bandanese nutmeg, Marzuki explains, are nothing short of amazing. Among its many components are limonene (a chemical present in lemons), pinene (which is also found in pine trees), and safrole (which also appears in sassafras). (It should be noted that these same chemicals are also found in nutmeg grown in other places, though often in smaller quantities.) Other asects of the spice’s sensory profile are equally outstanding: its vaguely Lysol-esque fragrance comes from pinene and other chemicals called terpenes, while its floral properties are from eugenol, a chemical also identified in cloves. It’s difficult to know for sure why nutmeg trees evolved to produce such unusual fruit; many scientists surmise that nutmeg’s volatile oil once served as a deterrent to predation by Banda’s small indigenous rodents. But while nutmeg fruits may be unappetizing to some Bandanese natives, they’re quite appealing to the walor, a local species of pigeon that feasts on—and disseminates—the seeds. (It’s said that Bandanese walor need not be seasoned when cooked, since their flesh is already so infused with nutmeg.)

Another unusual characteristic of nutmeg is the way in which the trees go about producing fruit. Joseph Armstrong, a professor of botany at Illinois State University, has studied the pollination methods of nutmeg trees and learned that a number of species of flying beetle are their main agents of reproduction. “These beetles fly tree to tree in search of pollen,” Armstrong says. “Once covered by the pollen found inside the flowers of the male trees, they’re lured by the fragrance of the female trees, which offer no reward of pollen. There’s a fluctuating dance of attractiveness between male and female trees: early in the day, the male flowers are especially fragrant, while during the evening the female ones are more seductive.”