Celebrating the Feast of the Seven Fishes 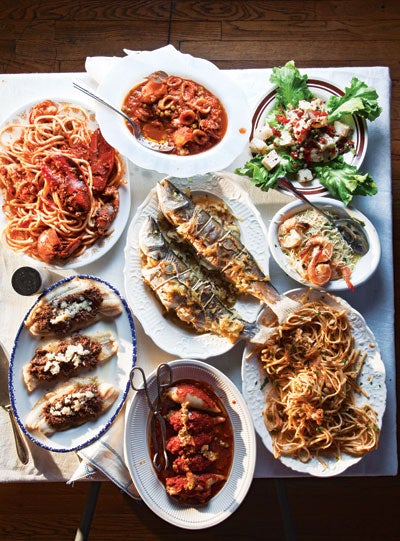 My grandmother and Aunt Frances lived in railroad apartments across the hall from each other in Greenpoint, Brooklyn. On Christmas Eve their entire apartment building smelled delicious because they left their doors open while shuttling between tiny kitchens to put together the Feast of the Seven Fishes.

Started in America and sometimes called La Vigilia (the Italian word for “eve”), the feast commemorates the wait for the birth of Jesus; since eating meat was not an option on holy days, it features fish. But nobody knows why seven: Grandma said it represented the seven sacraments of the Roman Catholic Church; Aunt Frances claimed it was the seven virtues; and Grandpa, sipping homemade wine, would say: “Seven represents perfection in the holy Bible. You gonna argue with perfection?”

It didn’t matter because they served more than seven anyway. The menu varied, but we had our favorites, like baccala, or salt cod salad, pasta con le sarde served Sicilian-style with whole sardines, and calamari with peas and potatoes, the squid only cooked for a minute or two so it stayed tender. Usually there was stuffed calamari marinara and sole smothered with olives; and there was always a fish served whole, like branzino with fennel and onions. In prosperous years shrimp scampi with capellini and lobster fra diavolo graced the table. Nowadays, the feast is prepared in one big suburban kitchen—but when I tuck into the flaky baccala, I’m right back in Grandma’s Brooklyn kitchen.

See a menu for the Feast of the Seven Fishes »