Spirit of the Bistro 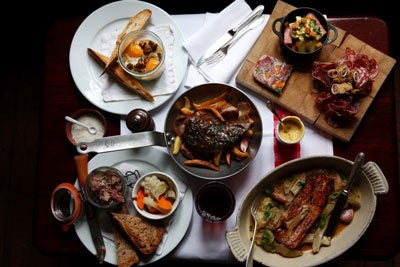 I thought I was sulking because of the thick knit tie and madras jacket I was being forced to wear on that stifling August night, but the real reason for my snit, though I couldn’t articulate it at the time, was that Paris seemed so excruciatingly out of reach for a 14-year-old boy from suburban Connecticut. Instead of following my parents through the Louvre or visiting Napoleon’s tomb, I wanted to be kissing someone on the banks of the Seine or sipping champagne on a terrace.

Still, I was hungry when we all got to the cozy bistro in St-Germain-des-Pres, and the smell of sauteing shallots made my mouth water. I loved the pungent scent of the Gitanes a woman at the next table was smoking, and the saucers of radishes and sliced sausage the waiter delivered with our menus. I devoured the bread, a baguette with a crackling crust and lacey interior web of tangy crumb.

“Do you know what you’re getting?” my brother asked when I ordered a salade frisee aux lardons and boeuf aux carottes. I insisted I did. It was half true—a salad of some kind and beef with carrots, whatever that might be. If the chunks of hot bacon in my salad came as a surprise, the mahogany sauce on my braised beef and carrots stirred a sensualist bent I didn’t know I had. Smoky and sweet, it was the most delicious thing I’d ever eaten. Instantly I understood the smiling, sated radiance of the crowd seated around me in the front dining room at Allard. Here was the Paris I’d been longing for.

It was the memory of that sauce, as much as anything, that compelled me to pull up stakes for the city 25 years ago, and I’ve been eating my way through the bistros of Paris ever since. Every good bistro meal reveals the unassuming genius of this profoundly French genre of restaurant. But it was by making my way to the city’s most beloved old-guard bistros—Aux Lyonnais, L’Ami Louis, and Chez Georges, all of which blessedly survive, like Allard—that I came to appreciate how time-honored technique and genuine care can transform the humblest of ingredients into transcendent meals.

Over the years, I’ve visited the temples of haute cuisine and developed an affection for Paris’s fast-paced brasseries (the few that haven’t been taken over by corporate chains, that is). Yet I remain convinced that the bistro is the truest expression of French cooking. Best known for plats mijotes, or long-simmered dishes, such as boeuf a la bourguignonne and pot-au-feu (beef stew with marrow bones), bistros can also be relied on for roasted meats in generous portions and classic side dishes like celeri remoulade (celery root in a mustardy mayonnaise) (see Recipe: Celeri-Rave Remoulade) and potato gratin. It’s what the French call cuisine grandmere (grandmother’s cooking), and in fact these places have traditionally been family-run, with the husband in the kitchen and the wife in the dining room (or vice versa). Recently, a new generation of chefs has put its own spin on the bistro, but the affinity for little neighborhood places you can call your own—and afford to visit regularly—has endured from the bistro’s 19th-century beginnings. It was in bistros that I learned to eat like a Frenchman, and it is to bistros that the French turn for comfort and continuity.

Chez Georges is the kind of resolutely old-fashioned place where it’s easy to believe there’s someone in the kitchen that truly cares about you. On the night in 1986 that I first visited the bistro, just north of the Louvre in the center of Paris, I’d lived in the city for only a few months. I’d been invited by an acquaintance well connected in the world of Paris food, and he’d mentioned that Julia Child would be among the other guests. As I’d planned, I was first at table at Chez Georges that night, which gave me time to get my bearings and drink a bracing glass of wine. The place was a perfect tableau of the Paris I wanted to belong to: a long, narrow dining room with wall-mounted mirrors reflecting an eclectic, sophisticated crowd.

By the time the others arrived, I’d decided on ratatouille to start and the blanquette de veau (veal in a lemony cream sauce). Julia sat across from me, and I was bookended by two grumpy French food critics. I sat quietly at first, listening as Julia replied to the question of why American home cooks hadn’t taken to French bistro cooking. “Good bistro cooking takes time,” she said in her charmingly fluty French, “and sadly, Americans have been trained by economistes domestique and big food companies to want to make quick work out of cooking dinner. What gets lost is that cooking is a pleasure, something you do for people you love.”

Then we ordered, and when it was my turn Julia stopped me in my tracks. “No, dear, that’s much too safe for someone who’s just moved to Paris,” she insisted. “Please allow me.” She let the waitress know that I’d have the headcheese and the sweetbreads with morels in cream sauce, and I was dumbstruck—first, to have my order so sweetly hijacked, and then to discover that I actually loved fromage de tete and ris de veau. As we carried on eating and drinking, our little party came to life, and we raised our voices to match the din of the animated conversations around us—the happy noise that is the mark of a real bistro. Tipsy in the metro after dinner, I meditated on the creamy succulence of the sweetbreads, and the way the wild mushrooms had teased out their delicately feral nuances. I also decided that a little well-meant bullying at the table could be a good thing.

A couple of months later, another friend asked me to write an article on old-fashioned bistros for the travel magazine she edited. She suggested beginning with dinner at Aux Lyonnais, a famous old bistro near the Paris stock exchange, that specialized in the cooking of Lyon. When I arrived on a wintry night, the red-painted façade and white lace curtains offered instant solace; the interior of the restaurant, little changed since its opening in 1890, was beautiful. The globe lamps overhead cast a warm glow over the mothering waitresses in black dresses with white aprons who alternately teased and babied the bankers and brokers who filled the room.

I drank fruity red Coteaux du Lyonnais wine, and after polishing off juicy, pistachio-studded saucisson de Lyon with a salad of warm potatoes dressed with a light vinaigrette, and then quenelles de brochet (pike dumplings) in a sauce Nantua (creamy crayfish sauce), I knew I must visit Lyon, the long-reigning gastronomic capital of the Gauls. There they call their bistros bouchons, and on that first night at Aux Lyonnais I got an authentic taste of lusty, offal-oriented, bouchon-style food.

I learned over time that Paris’s bistros are wonderful places to explore France’s patchwork of regional cuisines. Historically, many bistro owners have hailed from Lyon or from the Auvergne, in the south-central part of the country, but you can also find bistros that specialize in the dishes of Brittany, for example, or the Basque country.

It was in a bistro famed for its roasted chicken, however, that I had one of the more meaningful bistro meals. I was working for a fashion publishing company, and one afternoon I returned to my desk after having interviewed some designer to find a note saying that the company’s New York—based editor-in-chief was expecting me for lunch at a bistro called L’Ami Louis in five minutes. I galloped out the door and took a cab to a slightly shabby street in the 3rd arrondissement.

“Have you been here before?” asked the editor. I hadn’t. “It’s the world’s best bistro,” he declared. Soon the waiter arrived with escargots in garlic butter (see Recipe: Escargots a la Bourguignonne) and foie gras wrapped in a thin band of yellow fat. “We’re sharing. Dig in,” my boss commanded, and I did, foie gras first. Spread on toast, the buttery liver was sweet and earthy and sublime.

“Now tell me why you love fashion,” the editor demanded. I sputtered something about how it’s a reflection of social change. “Oh for God’s sake, that’s nonsense,” he began, and he was right. The truth was, I couldn’t have cared less about fashion; I’d taken the job as my ticket to Paris. Fortunately, he put the interrogation on hold when two roast chickens (see Recipe: Poulet Roti) arrived along with twin orders of potato galette (see Recipe: Galette de Pomme de Terre). I’d never eaten better chicken in my life, and the crunchy galette, topped with coarse-chopped garlic, was something I knew I’d forever crave. I also knew then and there that I’d have to find a different career—one that would bring me back to L’Ami Louis repeatedly, one that focused on what I really loved, the city’s food.

These days, places like L’Ami Louis are often described as “soldiering on,” part of a doleful refrain on the demise of the traditional bistro. I don’t buy it. In fact there’s been a heartening trend toward breathing new life into the form. When the French chef and entrepreneur Alain Ducasse took over Aux Lyonnais in 2002, he artfully updated a menu that many Parisians were finding heavy and antiquated, without compromising the bistro’s soul. I am thankful that I can still get the hearty Lyonnais classics there, but there are lighter dishes, too—things like delicate fried frogs’ legs with bright purslane puree—that give the place a sense of currency as well as continuity.

There are even newly minted bistros that are playing it straight with good old-fashioned bistro fare, and one of my favorites in that group is Le Bistrot Paul Bert in the 11th arrondissement. Its owner, Bertrand Auboyneau, is my idea of a local hero for serving excellent, reasonably priced, generously portioned bistro fare in his two cheerful dining rooms, which are full of flea-market bric-a-brac. This bistro is so popular among the bobos (bourgeois bohemians) from the surrounding neighborhoods, it’s necessary to book well in advance.

On a recent breezy night when the doors were open to the street, a friend and I started with some of the best terrine de campagne (country-style pate) in Paris—earthy, dense, and run through with flavorful fat—and a plate of marinated herring garnished with pickled cauliflower and yellow carrots. Next, seared onglet de veau (veal hanger steak) with sauteed girolle mushrooms for me, and for my friend a hand-chopped steak tartare (see Recipe: Tartare de Filet de Boeuf) with perfect frites (see Recipe: Bistro Pommes Frites). With a bottle of rich red St-Joseph, the meal was so good I ended up feeling like an elated 14-year-old all over again.