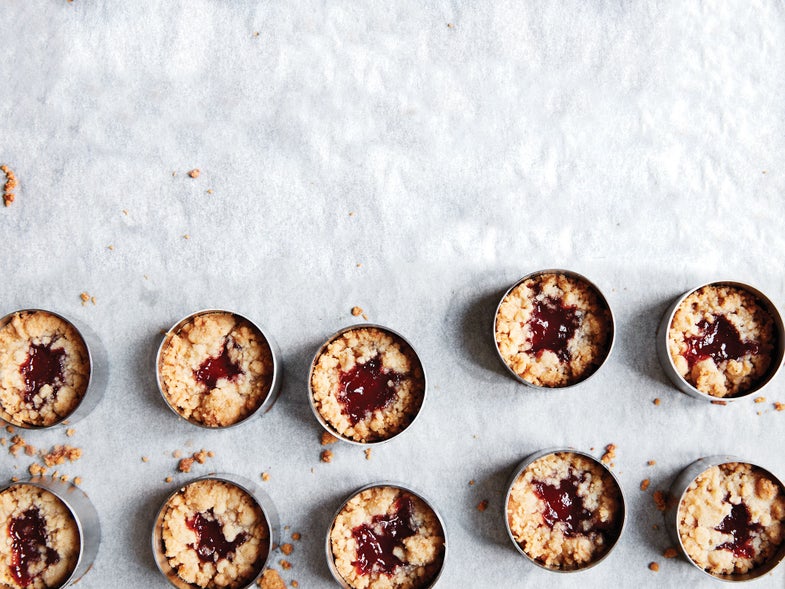 These are dream cookies…literally. They came to me in a dream in Paris, the city of sweets. The base is a French shortbread, or sablé, flavored with honey and loose tea. If you have 2-inch baking rings, you can make the cookies in the rings on lined baking sheets instead of using muffin tins. Build the cookies inside the rings, bake, then leave the rings in place for at least 20 minutes before lifting them off, rinsing and reusing. Get the recipe for Honey-and-Tea Jammers ». Christina Holmes
SHARE

Every year, a gazillion or so new cookbooks come through Saveur. Seemingly, overnight they pile up, covering our desks in teetering towers and wobbly columns, subsuming any free space on every open surface. Most of the year, we’re swimming through a sea of cookbooks. So, when we claim a copy for our own or put it on the shelves of Saveur’s permanent library, it’s saying something. Most of the books below are shiny, new 2016 editions, and the couple that aren’t are so good they’ve been hanging around since 2015.

Not quite a cookbook, Amaro, by Brad Thomas Parsons, has catalyzed my casual amaro interest and transformed it into a full-blown obsession. There are comprehensive guides to some of my favorite spirits (see Bràulio, Zucca Rabarbaro, and the strictly not-Italian China-China Amer), as well as cocktail recipes. But what really got me hooked were the formulas for concocting your own amaro. My mid winter project will be putting together one based loosely on the “Rite of Spring” amaro, making personal tweaks to taste here and there. The hope is, come springtime, I’ll have a bottle of my own to show off. —Alex Testere, Associate Editor

I have never related to a cookbook more than Anthony Bourdain and Laurie Woolever’s Appetites. It’s a cookbook that makes me think, I can do that! And also, there’s a great chance my food will actually look that way! Even if you’re not going to make any of the recipes, please just look at the book’s photos. They’re not the same ho-hum food glamour shots you see everywhere else. There’s a photo of Bourdain sitting on a toilet in a fancy bathroom, eating a sausage and pepper hero in voracious bites that nearly take out the foil and fingers holding the sandwich together. They’re gritty and weird and messy—exactly how it should be. —Katie Whittaker, Assistant Digital Editor

I don’t really use cookbooks, but José Pizarro’s Basque is super beautiful from the art perspective. The use of lush location photography and food photography made me genuinely want to eat all that beautiful food and visit Basque country. —Allie Wist, Associate Art Director

China: The Cookbook by Kei Lum and Diora Fong Chan

For a while now I’ve been searching for a book that could really teach me about authentic Chinese cuisine. Then China: The Cookbook by Kei Lum and Diora Fong Chan showed up. The husband and wife author team patiently outline the 33 regions and subregions of Chinese cuisine, acquainting us first with general descriptions like salty (the north), sour (the east), lightly sweet (the south) and “heart-clutchingly spicy” (the west), then delve into the culinary traditions and styles of each. I’ve learned tips that have improved some of my kitchen fundamentals like stock making and cooking with white rice, and also become more familiar with the art of the cleaver. —Stacy Adimando, Test Kitchen Director

Now out with her 12th cookbook, Dorie’s Cookies, Dorie Greenspan has written a beautiful homage to all things cookie, with 170 recipes that range from the approachable and straightforward—Chunkers, a chocolate cookie packed with dried fruit and chocolate chunks, or a Cast-Iron Pan Chocolate Chip Cookie Bar, which is essentially a single ginormous cookie—to the more sophisticated, like Vanilla-Brown Butter Madeleines and Fennel-Orange Shortbread Wedges. It’s enough for a non-baker like me to get out my mixing bowls. —Sophie Brickman, Features Editor

Back when I graduated from college, the first baking book I ever got was Dorie’s Baking: From My Home to Yours. I stunk at cooking, but I knew my way around a pile of sugar and flour, and Dorie’s instruction only improved my game. Still, whenever I get an urge to whip egg whites or cream butter, Dorie’s books are the the first ones I consult to channel my confection desires. So when her definitive cookie tome arrived, I hauled it home and broke out the sugar. —Leslie Pariseau, Special Projects Editor

A gorgeous instructional text that breaks down the kaleidoscopic world of Chinese cuisine into its essential elements (stir-frying, steaming), then breaks down those elements into even more essential atoms of knowledge (velveting, dry-frying). Phoenix Claws is for self-taught cooks who burn through cookbooks like novels. It’s a reference text that reads like a spellbook. It demystifies Chinese cuisine while celebrating its majesty. And it has a hell of a section on how to cook your own Peking duck. —Max Falkowitz, Executive Digital Editor

Handmade: Stories of Strength Shared through Recipes from the Women of Sri Lanka

The concept behind this cookbook is a beautiful one. It’s about the women who have spent the last 20 years in the midst of Sri Lanka’s Civil War. These stories are about the hardship they experienced told through food and recipes and the comfort these traditions brought to them. —Michelle Heimerman, Photo Editor

Regarding Cocktails by Sasha Petraske and Georgette Moger-Petraske

The undisputed cocktail book of the year is Regarding Cocktails, a compilation of 75 recipes by late cocktail luminary Sasha Petraske that was finished by his widow, journalist Georgette Moger-Petraske. Rooted in Prohibition-era tippling, the book is the essential text for a perfect martini or daiquiri, but it also contains recipes for modern classics created over the years at Petraske’s many bars, like the London Maid (gin, lime, mint, cucumber) and The Penicillin (Scotch, lemon, ginger, honey). Beyond recipes, find fond anecdotes about the bar legend along with Petraskian gems of wisdom that range from etiquette on either side of the bar to men’s style and best practices for cutting ice. —Dan Q. Dao, Deputy Digital Editor

The Nordic Cookbook by Magnus Nilsson

Nilsson’s definitive Nordic bible has been in heavy rotation for me this year. Received as a Christmas gift last year, it is especially great during the cold winter months for its focus on root vegetables and warming dishes like curry chicken. It’s big and heavy and the photography makes me want to run away to Scandinavia immediately. —Daryn Wright, Digital Intern

Preserving the Japanese Way: Traditions of Salting, Fermenting, and Pickling for the Modern Kitchen by Nancy Singleton Hachisu

So often pickling is thought of as taking vegetables and putting them in vinegar, but Preserving the Japanese Way applies greater complexity to pickling, while teaching simplicity of process. It also stays true to the idea that preserving is a seasonal ritual, rather than a novelty. I always make the shoyu koji-marinated yellowtail and when I can find them the fiddlehead ferns drizzled with soy dashi. —Nissan Haque, Digital Producer

I worked at Sofra, Maura Kilpatrick and Ana Sortun’s exceptional bakery in Cambridge several years back and I’ve never eaten so well in my life. I can’t wait to revisit their beautiful, Middle Eastern-Inspired cuisine with their new book. Bonus points for lots of savory baking recipes, too. —Kat Craddock, Test Kitchen Assistant