You might think of a panini press as having a singular purpose—making paninis—but that’s far from the truth. Those with grooved plates can act as an indoor grill, but without smoking up the joint, whilepanini presses with flat plates double as skillets that can cook pancakes, scrambled eggs, and more. At its best, though, a panini press upgrades a regular, plain-Jane sandwich to an indulgent, luxurious meal. Every sandwich is improved by toasting the bread and melting the cheese, and pressed sandwiches have a certain allure that’s different than those cooked in a pan or broiled in the oven—more pressing equals more opportunity for all the melty, juicy insides to meld together, while the outside crisps So, no matter what your preferred function is, you’ll definitely find that your panini press is more of a multipurpose tool (and will receive more use) than you may have imagined. To purchase the best model for your needs, shop our favorite panini presses below. 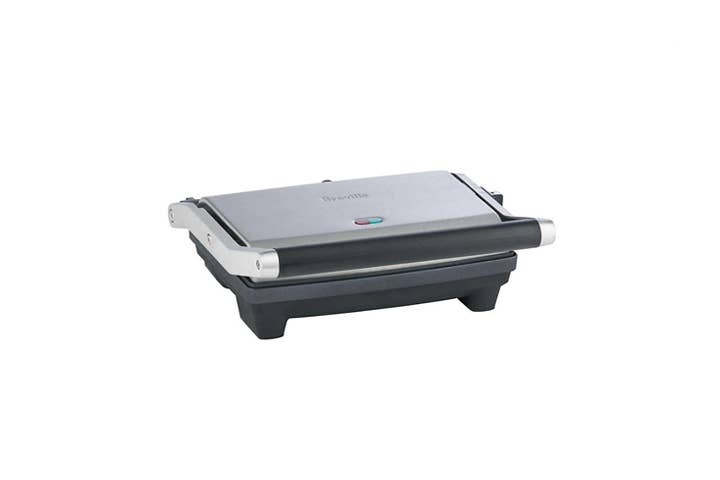 Why we chose it: Breville’s panini press grills two sandwiches at once, with adjustable thickness levels for toasting and pressing melts.

Breville’s panini press made crisp sandwiches with gooey cheese in just a few minutes. We loved the adjustable heights, which are intended for toasting traditional sandwiches or making open-faced sandwiches and dishes like tuna melts. Plus, the machine is compact enough to fit in a cabinet but large enough to press two sandwiches at once. Users have mentioned using their panini press for omelets, French toast, and pancakes, though we stuck to sandwiches for testing purposes. The inner plate is non-stick and doesn't require any butter or oil before use, which is a bonus for preventing overly greasy bread. , But, it is flat on one side and ridged on the other, so If you prefer for your entire sandwich to have grill marks,this may not be the model for you. Otherwise, we have no complaints about Breville’s sturdy sandwich press. 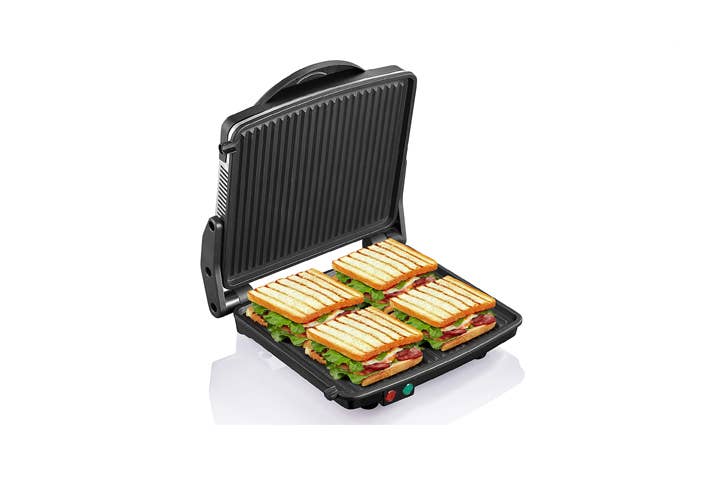 Why we chose it: An affordable but basic panini press that yields crispy sandwiches with gooey cheese.

Though it may not have the bells and whistles of other appliances, the Yabano panini press certainly delivers on hot, crispy sandwiches with melted cheese inside. We found that the press cooked both sides evenly, and were satisfied with its nonstick coating and fast heating. However, the panini press doesn’t come with temperature settings, and the outer lid gets very hot, so use caution when opening and closing the appliance. Additionally, the press emitted a strong burning smell when first turned on, though that did fade away once it was fully heated. Overall, it’s a solid panini press at a winning price point. 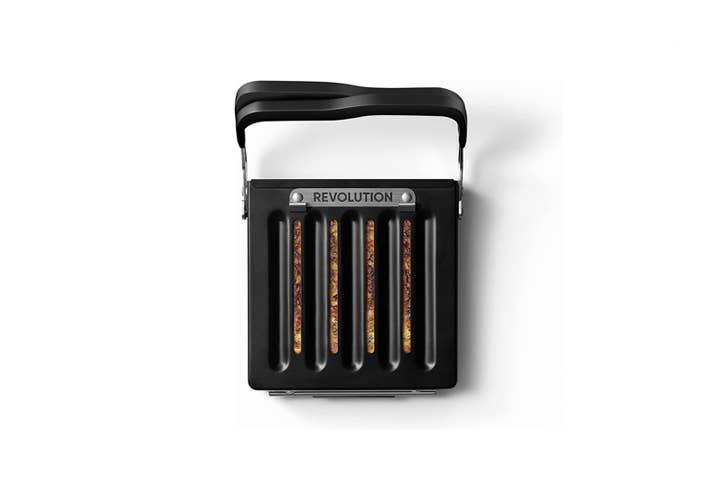 Why we chose it: An insertable panini press that pairs with the Revolution InstaGlo Toaster.

Not every panini press is its own machine. This handy little accessory allows you to build a sandwich and insert it into the Revolution InstaGlo Toaster, a digital toaster that customizes its settings for the type of bread you’re using and how toasted you want it to be. The panini press itself is very easy to use, but it’s a bit small and will only fit sandwich-style bread. We found that our paninis were well-toasted, but the cheese wasn’t as melted as it was with other panini presses. Still, we love it for how customizable it is, the digital screen on the toaster, and because the panini press is dishwasher safe. Though it’s pricey, the panini press is a must-have accessory for a Revolution toaster. 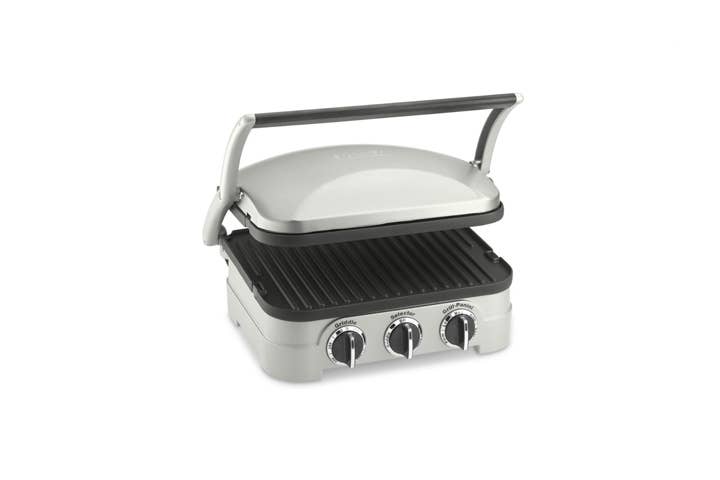 Why we chose it: A true workhorse in the kitchen, the Cuisinart Griddler can serve as a grill, griddle, and panini press.

A panini press may seem like a one-trick pony, but this Cuisinart model can truly do it all. With interchangeable plates for a griddle, grill, and panini press, this handy machine can cook everything from pancakes to kebabs, and opens wide enough to easily flip whatever’s cooking inside. Though not included, you can purchase separate plates to turn it into a waffle iron, too. When testing paninis on this model, we found that it didn’t heat as quickly as the Breville and that the bread toasted a bit more on the bottom than it did on the top, but the difference was minor and not enough to deter us from using or recommending it. As a bonus, once you’re done cooking the plates can go right in the dishwasher, so it’s easy to clean up, too. If you want an item that you’ll truly get use out of, you can’t go wrong with the Cuisinart Griddler. 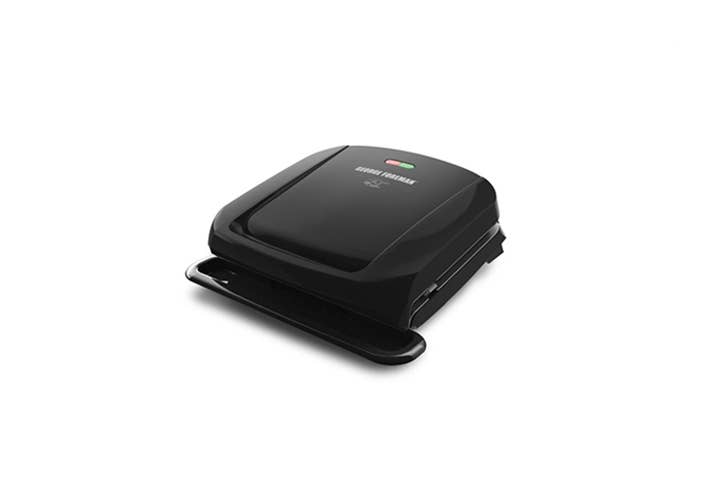 Why we chose it: A tried-and-true favorite, the George Foreman grill heats evenly and doesn’t break the bank.

Though it’s been in the game since 1994, the George Foreman grill is still going strong. This model sets itself apart from the pack with removable plates, which are dishwasher safe for easy cleaning. The grill heats evenly, with both sides of our sandwich toasted and marked. Plus, it can be used for everything from burgers and hot dogs to grilled vegetables and fish. It is on the smaller side, though, and definitely won’t hold more than two sandwiches at a time. It doesn’t allow you to set the temperature, and the nonstick coating can flake over time, so take extra caution and don’t use metal or other harsh utensils. Ultimately, though, you can’t beat the price and easy cleaning of this classic model.

Things to Consider Before Buying a Panini Press

Mary Kastman, executive chef at Driftless Café in Viroqua, Wisconsin, says versatility is the number one factor to consider when purchasing a panini press. She recommends the Breville Panini Duo Sandwich Press because of its adjustable height feature. “An open griddle space is an added bonus if you want to cook eggs or pancakes,” she says.

Basic panini presses will heat to a certain level that cannot be changed. More advanced models will allow you to adjust things like temperature or the height between the plates, and may offer specific settings for certain dishes or ingredients. If you are a more detail-oriented cook, you may be disappointed with the lack of settings on a basic panini press. However, if you’re just looking to grill or press sandwiches, they’re certainly capable of getting the job done.

Panini presses can be made of stainless steel, anodized nonstick, or cast iron, which is traditionally used in Italy. “In Italy, the Panino alla Piastra is synonymous with street food,” says Diego Puddu, Head of Culinary at Eataly North America. “It's usually sold from kiosks during street food fairs, and lately many shops have opened with a focus on panini only — the beloved Paninoteca. So choosing the right panini press to reflect the flavors of street food is not taken lightly. Cast iron is very versatile, easy to use, and clean, and it doesn't occupy much space in your kitchen. When deciding on one main characteristic, I’d suggest looking for a wooden handle so you have more grip when pressing on the pan.”

A nonstick surface isn’t required, but it will make using and cleaning a panini press much easier. “A nonstick surface is helpful as it's easier to clean,” Kastman says. To clean it, she recommends using mild soap and a soft cloth, but never an abrasive sponge.

What is the difference between a panini press and a sandwich press?

Per Kastman, a panini press “relies on weighted plates whereas a sandwich press is a bit more basic and not as precise.”

What can you cook on a panini press?

While panini presses are primarily used for sandwiches, you can use them for many other things depending on the style. Mario Pesce, founder of Panineria in New York City, also uses his panini press for garlic bread, while Puddu uses his to cook meat. “Meat is definitely a perfect fit to cook with a press,” he says. “In particular, I suggest making Bombette Pugliesi, a typical Apulian dish made from high-quality pork wrapped in Caciocavallo cheese, pancetta, and parsley — it’s very easy to cook.” Don’t ignore the paninis, though. As Pesce says, “Eat more sandwiches and you’ll have a happy life.”

What is the best cheese for paninis?

“You want a cheese that is able to melt,” Pesce says. He says mozzarella is the best, but will use a soft cheese like fontina, too. Kastman agrees, citing havarti, fontina, or mozzarella as her favorites. Steer away from hard cheese that doesn't melt well, like feta or cotija.

Panini presses are useful kitchen tools that can upgrade sandwiches and serve as grills, skillets, or more. In our experience, the best ones allow you to customize the experience through different settings or plates. This will give you the most control over your cooking.

To test the best panini presses, we made dozens and dozens of sandwiches. Though the style ranged from Italian sandwiches to Cubanos, we made sure that each one had a meat, cheese, vegetable, and condiment component. Whether or not the sandwiches were oiled depended on recommendations from the manufacturers. The Breville panini press, for example, did not call for fat or butter, so we didn’t use it. The George Foreman grill recommended a light brush of oil, so we followed those guidelines.

Once each sandwich was pressed, we evaluated each one to see how toasted the bread was and how much the cheese melted. We also checked whether the sandwiches were evenly grilled on both sides, and made note of how many sandwiches each press could hold. For most tests, we assembled sandwiches with panzanella, but used sandwich bread for the Revolution press, since that was the only size that fit. We also evaluated the presses to see whether they had temperature settings, how versatile they were, and how easy they were to clean and store.