The 11 Best Canadian Treats You Can’t Get in America 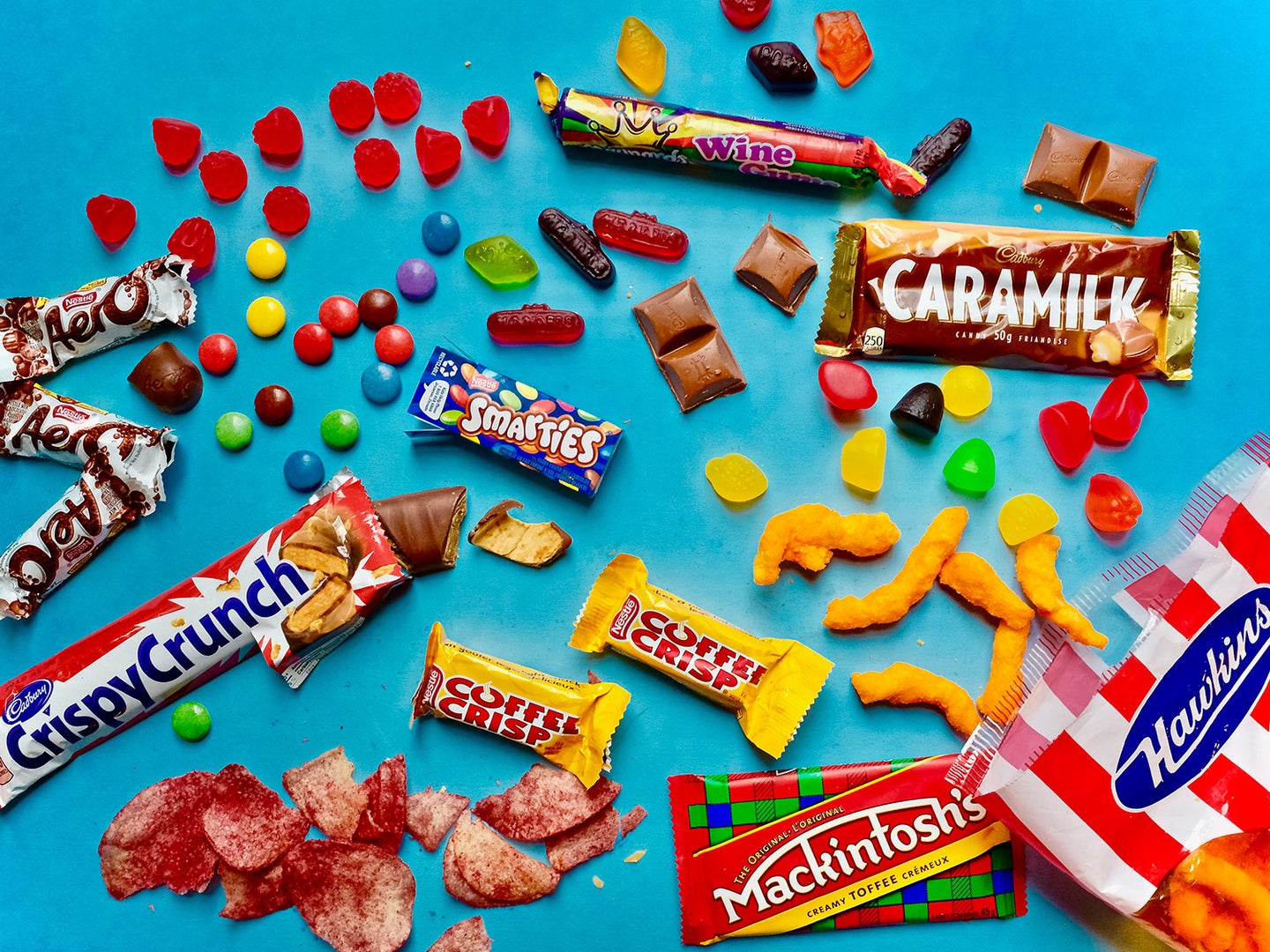 Canada is a vast, sprawling country, perhaps best known to Americans as “up north” or “the place where maple syrup comes from.” While both things are true, one might be surprised to learn that our most beloved snacks and candies don’t involve maple syrup in the slightest (or moose, for that matter). Our favorite nostalgic junk foods—gummy candies, chips, and tooth-attacking toffee—aren’t so different from the ones Americans grew up with, except for one thing: they’re better.

Get seasonal recipes, methods and techniques sent right to your inbox—sign up here to receive Saveur newsletters. And don’t forget to follow us on Instagram at @SaveurMag.

Like many Canadians, I had no idea that the snacks of my childhood were unique to Canada until I spent a year living in the U.S. The usual suspects—Snickers bars, M&Ms—abounded, and yet I couldn’t help but wonder: Where were the wine gums? Why were there no “All Dressed” Ruffles? After a trip back to my Canadian hometown, I returned with a bag of Lays’ ketchup-flavored potato chips for the SAVEUR test kitchen crew, and by their reactions you’d have thought I’d walked in toting a live chicken. I watched as they puzzled over a pouch of Maynards wine gums, gnawing on one that read “GIN,” befuddled by the fact that its flavor was completely unrelated.

With constantly expanding global markets, though, it’s become easier than ever to find niche products in any country, regardless of origin. But a few uniquely Canadian favorites have managed to stay put.

First made in the United Kingdom in 1909, Maynards Wine Gums are popular in many Commonwealth countries, but have yet to expand elsewhere in North America beyond Canada. They come in a variety of shapes and flavors, none of which really have anything to do with wine. The gummies bear words like gin, sherry, bordeaux, and champagne, and yet they taste nothing at all like any of those things; their flavors are more or less generically fruity. Their texture—much firmer than American gummies—is comparable to if you took a Haribo gummy bear and let it go a bit stale, but that’s what we love about them.

From the makers of tough, chewy wine gums, Maynards Swedish Berries have what can only be described as the perfect gummy texture: softer than the wine gums but with a bit more chew than most gummies. Related in color, texture, and flavor to the more well-known Swedish Fish, they’re just a bit more literal in shape (which really makes you wonder why the Swedes started making gummy fish in the first place.) Their habit-forming, wonderfully generic “berry” flavor makes them hard to put down.

Despite Americans’ boundless love for putting ketchup on everything, Lay’s only markets and sells their tangy tomato-y potato chips in Canada. While the concept has spread out into the U.S., it hasn’t caught on in the same way it has in Canada, where ketchup chips have become a national tradition in their own right. Part of the beauty of Lay’s ketchup chips is that they don’t really taste like ketchup, but they perfectly capture the vinegary umami of the condiment. They were first conceived in the 1980s when Hostess rolled out a series of grape-, orange-, and cherry-flavored potato chips that, to no one’s surprise, were an astounding failure. The chip team went back to the drawing board and focused all their efforts into the underappreciated tomato, and ketchup chips were born. Every since, they have remained integrally woven into our patriotic Canadian snack fabric.

Always easily discernible by its signature tartan packaging, Mackintosh’s toffee is as hard as a brick and equally as likely to ruin your teeth. I would love to see the stats on exactly how many people have pulled a filling—or an actual tooth—from their mouth with it. I remember snacking on it as a kid, enjoying the sweet caramel flavor until the inevitable panic-inducing moment when the candy seals itself to one of your molars, and you’re certain it will never be removed. Childhood trauma aside, this snack’s history is long as it is delicious: Canadians have been indulging in “Macks” since 1890, adding Mackintosh’s Toffee to our 100-year-old Canadian candy club.

Not to be confused with the chemically flavored chalk disks Americans call Smarties (though we have those too; they’re called Rockets), Canadian Smarties are delightful sugar-coated chocolate candies, not entirely unlike M&Ms. And yet, they’re better: The candy shells are slightly thicker, giving them a sweeter, crunchier quality that makes M&Ms seem like old news. Ever since the 1970s, Smarties have been infiltrating our young minds with a marketing campaign posing the question, “when you eat your smarties, do you eat the red ones last?” You’d better believe this jingle split schoolyard friendships into factions: the ones who did, and the rebels who ate whatever color they wanted, whenever they wanted. About a decade ago, Smarties made the switch to using all-natural coloring. While some folks were in uproar over losing the original radioactive colors (they’re slightly paler now), we’ve grown accustomed to the new ones.

The All Dressed chip is a Canadian mainstay. It brings the punch of barbecue chips, the tang of salt-and-vinegar, and the herby sour-cream-and-onion experience all one magnificent snack. Lay’s Ruffles aren’t the only way to find them (there’s also Old Dutch Ridgies), but without a doubt, the extra-crunchy crinkle-cut texture is a requirement. They’re so beloved in Canada that Lay’s made them available in America for a few months in 2015, but they’ve since left the market. Alas, most of America has no idea what they’re missing.

Nestlé didn’t stray too far from their comfort zone in the naming of this one. Coffee Crisp is, unsurprisingly, a coffee-flavored wafer crisp covered in milk chocolate. It’s not aggressively coffee-flavored, and it’s tempered by the chocolate, sort of like a crunchy tiramisu. While the idea began in the United Kingdom, the coffee version has existed only in Canada since the late 1930s (though there was a brief period between 2006 and 2009 when Nestlé tried selling them in the U.S. to appease Canadian expats). While I enjoy them as an adult, I distinctly remember immediately discarding all of these bars from my Halloween haul as a child because no kid wanted the coffee candy.

While Cadbury is a British company, Caramilk is a specifically Canadian creation, produced only in a single factory in Toronto (though you can find similar creations abroad under the names of “Caramello” or “Cadbury Dairy Milk Caramel”). It consists of a bar of milk chocolate scored into individual cube-shaped bubbles of liquid caramel. It’s a simple enough concept, but Cadbury built up a classic marketing campaign around the caramel “secret”—how does it get inside? Some of the original commercials featured aliens, devils, and monks, each protecting the secret at all costs. The campaign is so synonymous with the brand that they even rebooted the caramel secret campaign half a century later in 2010.

In the United States, you’ll find an endless array of cheese puffs, cheese balls, and Cheetos, but without a passport, you will never find the delightfully crunchy Hawkins Cheezies. Similar to Cheetos yet somehow even more vibrantly orange, Cheezies are a puffed-corn snack made with aged cheddar, giving them a surprisingly sharp tang in addition to their cheesiness. Unlike many other popular Canadian snacks that have been bought and resold under bigger brand names like Nestlé or Cadbury, Hawkins Cheezies are still manufactured by the same family business—using the original machine made by their inventor in 1949.

The secret ingredient in Nestlé‘s Aero bar is—big surprise—air. Admittedly, this one is available in quite a few other countries, though it still never took off in America. The milk chocolate bar is filled with tiny air bubbles, creating an unusual but satisfying texture. It almost seems like it’s going to be crunchy but instead simply melts away in your mouth. To quote some American friends: “It’s chocolate in your mouth, and then it’s just gone!” The slogan for Aero in Australia during the 1980s communicated a similar sentiment: “It’s the bubbles of nothing that make it really something.”