Mark the longest night of the year with a bowl of adzuki bean porridge. 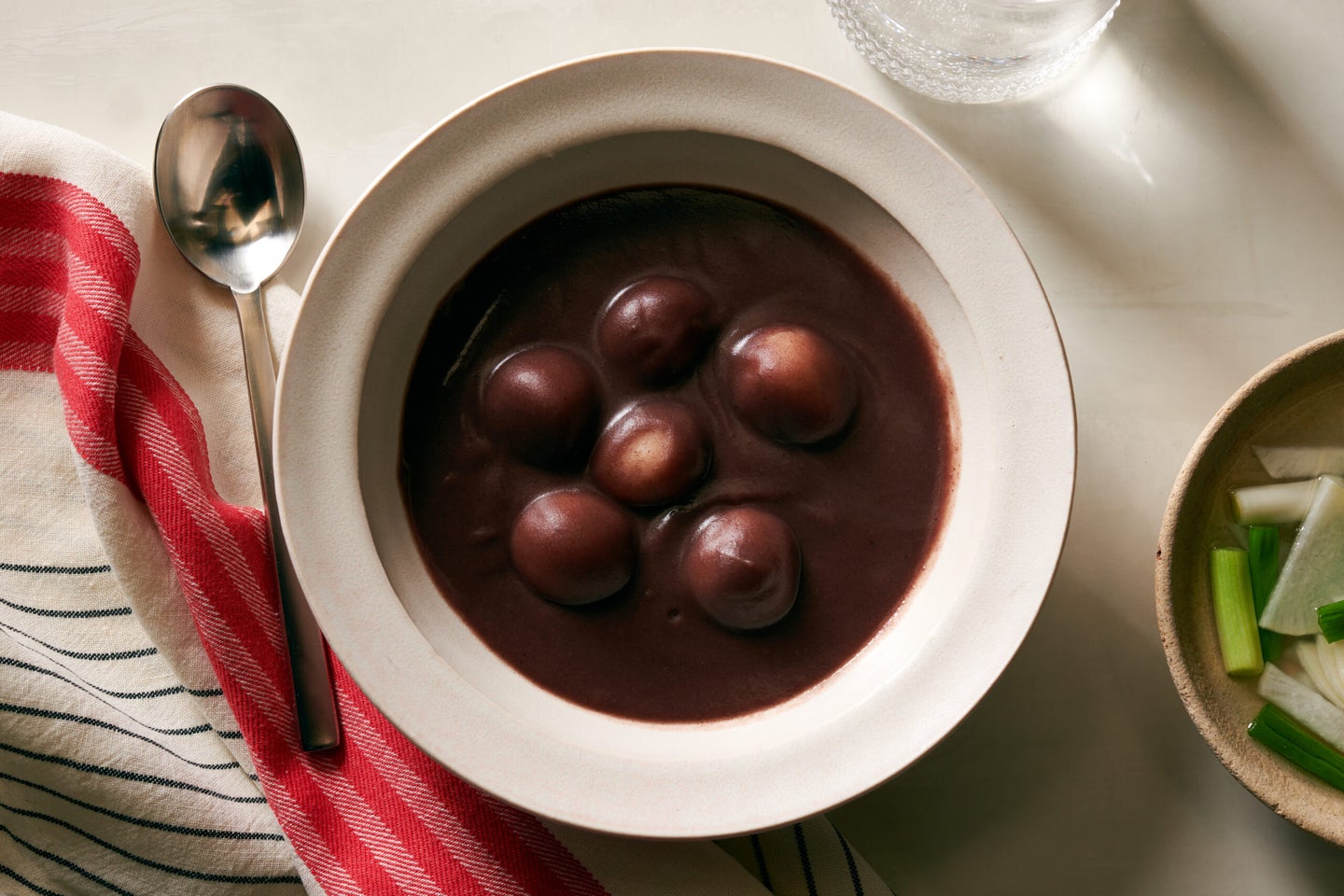 Every winter, when the Earth reaches its maximum tilt in relation to the sun, the atmospheric event produces the longest night of the calendar year in the Northern Hemisphere. The episode usually falls on December 21 or 22—and around the world, members of the Korean diaspora mark the day, called Dongji, with bowls of patjuk.

“Historically, Winter Solstice was viewed as akin to the beginning of the new year,” says Mina Park, who owns the Korean eatery Shiku in Los Angeles. Because Dongji marks the return of progressively longer daylight hours and heralds the advent of a new cycle, it is sometimes referred to as “Little New Year’s Day.” For many, patjuk is an important part of the day’s observances.

A pot of patjuk is made from red adzuki beans and glutinous rice flour. The flour is shaped into little white balls, which are thought to resemble birds’ eggs and symbolize new beginnings. “It was said that when you eat patjuk on Dongji, you turn one year older with the new year,” Park explains.

Red is also considered the most auspicious hue in Korean culture. People traditionally hoped the lucky shade of adzuki beans could help banish the darkness and beckon the light on the longest night of the year. “The color red was believed to ward off evil spirits and bad luck,” says Ji Hye Kim, the chef behind the Korean restaurant Miss Kim in Ann Arbor. “Bowls were placed around the house to ward off the spread of plague believed to be brought on by evil spirits.”

To make patjuk, cooks boil the beans before blending and straining them to produce a luscious and creamy purée. They then combine glutinous rice flour with warm water to create little balls of dough, which are then cooked directly in the porridge. The dish, though simple, is a labor of love.

“Without constant and consistent stirring, the beans stick to the bottom of the pot, soon infecting the entire pot with the undesired stench of burn and smoke,” says Ji Hye Kim, who recalls watching her mother make the dish. “The warmth of her patjuk filled the entire house, promising something comforting and hearty.”

Park, too, remembers her own mother’s Winter Solstice tradition. “She would make patjuk in huge batches, filling old glass kimchi jars with it. We would eat the patjuk all week long.”

Though the process of preparing this simple dish requires attention, it can also be a quiet, meditative affair, one in which multiple generations of a family can participate together. Grace Park, who founded the food blog Crazy Korean Cooking, remembers helping her grandmother and great-grandmother shape the dough into little spheres for patjuk. “It was fun because it’s basically like edible playdoh,” she says. “And you get to eat your creation afterwards.”

Patjuk can be either sweet or savory. As a child, Kim preferred hers with the “cloying sweetness” common in restaurant versions. Her mother, however, served the porridge savory—but it wasn’t until Kim grew up that she realized excessive sugar actually hid the beauty of the dish. “All the sweetness was an insulting coverup for the hearty red beans,” she says. “Too much sugar masked the natural sweetness drawn out by slowly cooking them—stirred and stirred by someone with love.”

In Korea, the Winter Solstice continues to be one of the most important celebrations of the year, tying people to their ancestors century after century and marking the passage of time.

“The tradition is to have the same number of them as your age,” says Kim of the dough balls. For Mina Park, the sticky spheres were always her favorite part of the dish as a child: “I would fish for them with a wooden spoon.”Grace Park, too, loves their tender, chewy texture, which she always found “so soft and so comforting.” Fortunately, if tradition is to be followed, they will all get to enjoy a bigger portion of glutinous rice balls in their patjuk with each passing Dongji.