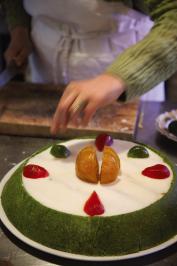 This elaborate, marzipan-ringed ricotta cake is a traditional Sicilian dessert. It first appeared in our March 2011 issue as a part of our special feature, Soul of Sicily. See the recipe »