The plate lunch is more than just a takeout meal; it's a universally beloved, island-wide symbol of Hawaii's diverse culinary culture 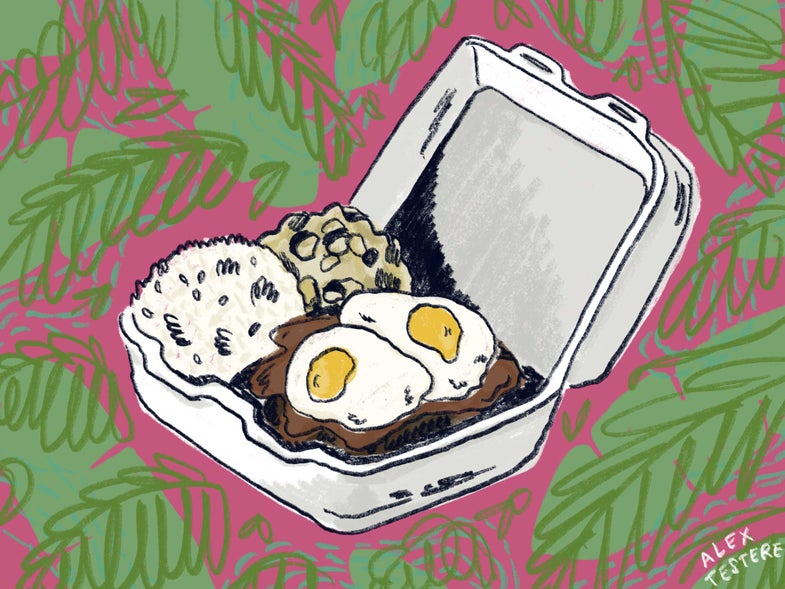 “We’re leaving at 6 a.m. tomorrow,” my dad said, handing me a pair of his mortar-stained jeans. I was a broke college student at Syracuse University, back home in Hawaii for the summer before an expensive semester abroad in London. I spent those next three months mixing concrete and cutting tiles, paving the dreams of rich people’s fantasies: swimming pools overlooking the ocean. My dad’s twin brother owned the company. It was the only reason I was allowed to handle a powertool.

The work was grueling, and the only respite was our lunch break, which usually consisted of soggy homemade sandwiches, extra-hard-boiled eggs, and fish cakes that I would gulp down alongside a Monster energy drink. But every so often we’d head to the closest drive-in and pick up a plate lunch: two scoops of white rice, macaroni salad slathered in mayo, a choice of meat (always greasy), piled into a styrofoam container. I’d order the cold ginger chicken, pale pieces of naked thigh that I’d douse in a potent concoction of green onions and ginger, then drizzle with a thin coat of soy sauce, its magic contained in the tension between cold chicken and hot rice, between savory and bland.

We’d slump under the shade of a nearby tree on the side of the road, hands caked in dried cement, barely speaking, a shared communion over achy muscles and food, a duo of dirty misfits. Except my dad was doing this to survive; I was doing this to prance around Piccadilly Circus.

What I didn’t know was that by eating plate lunch on the side of the road I was extending the lineage of the mostly Asian immigrants who’d sailed to Hawaii well over a century ago to toil in fruit plantations and labor in a burgeoning sugar economy. The plate lunch is an amalgamation of these immigrant tastes, the outcome of plantation workers taking culinary staples from Asia and transforming them under the strain of limitations that only working-class people living on islands can understand.

From Korea you have meat jun, thin strips of beef wrapped in a crispy sweet omelette and dunked in soy sauce spiced with gochujang, a twist on the beef pancake known as soegogi-jeon. From Japan, shoyu chicken, thighs boiled in a pot of soy, mirin, and brown sugar, not unlike the glaze used for teriyaki, and served with a topping of diced green onions. If you want to get local local there’s laulau, a slab of pork cloaked in taro leaf that’s traditionally cooked in an underground oven, called an imu. And of course, the infamous loco moco, a single beef patty supporting two eggs, sunny-side up, all showered in gravy.

Today, non-working-class people, like Punahou graduate Barack Obama, also grind plates of loco moco, but that’s the nice thing about Hawaii—rich people eat Spam too. The local food is also less concerned with cultural distinctions. Drive-ins seamlessly serve Hawaiian, Chinese, and Filipino-inspired fare side by side, without attracting the ultimate side-eye: “Fusion.” I don’t know if Hawaii is a melting pot, but it’s definitely a plate lunch.

Which is all to say that the plate lunch is impervious to food trends. You won’t soon find one filled with plant-based meats or turned into a calorie-conscious grain bowl. Unlike poke, the sort of Hawaiian ceviche proliferating on the mainland faster than you can say “Chipotle,” the plate lunch is too heavy to traverse the entire Pacific. And too ugly. Social media wouldn’t have it: too gelatinous, too drab, too messy. Too many carbs. So leave it where it is, to be eaten on the side of the road in Hawaii. No food pics, just a quiet respite.