Mexico’s Chocolate Clams Are Worth the Trip

Off-roading, clam-digging, and sustainable fishing on the Gulf of California 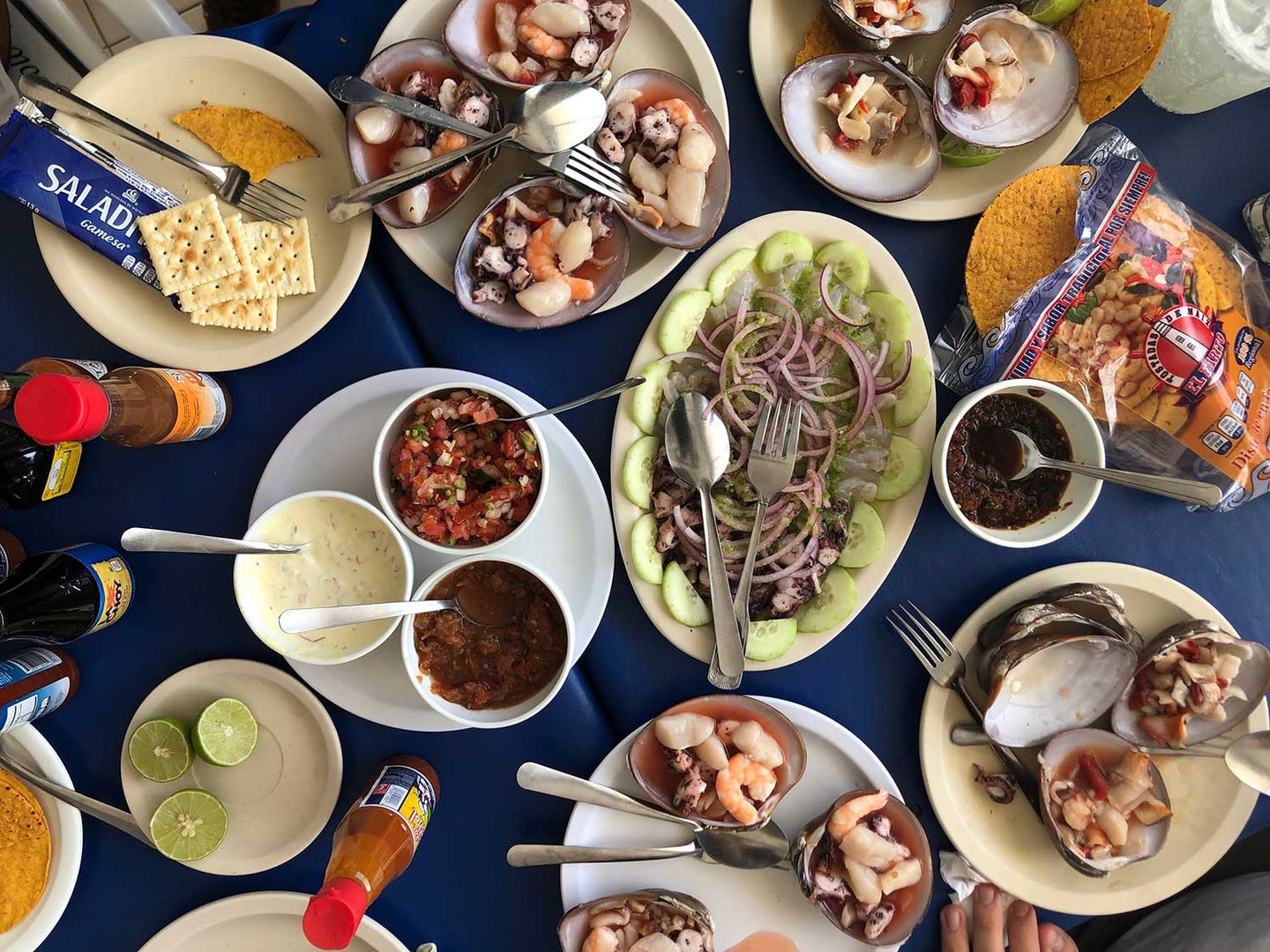 Riding shotgun through a cactus-studded desert in Guillermo Gomez’s ATV was not quite what I expected out of my Mexican beach vacation. And yet here we were: in shades and matching bandanas to shield us from the sun and dust, we might have been Mad Max extras, or blitzing cross-playa at Burning Man. Instead, the chef of Cabo San Lucas’s luxurious Cocina del Mar and I were on our way through Cabo Pulmo National Park—a rugged beachside preserve on Baja California Sur’s East Cape—to dig for almejas chocolatas, chocolate clams, in the Sea of Cortés.

Chocolate clams refer to two species of edible bivalves, M. squalida and M. aurantiaca, which live in the sandy waters of the Sea of Cortés and along the Pacific Coast of the Baja Peninsula. Historically, they have been a humble food source for coastal Mexican residents and fishing families, who most often roast them right in the sand on the beach or crack them open and enjoy them in raw, ceviche-like preparations. In recent decades, as regional Mexican cuisine has swelled in popularity, so have these pretty, mildly-flavored shellfish.

Diving for chocolate clams the old-fashioned way requires impressive lung capacity—after repeatedly plunging below the surface, I found a few spiny, purple sea urchins, but no clams; Gomez, however, gleefully pulled up half a dozen of them, popping up over the surface with a grin and a gasp to toss yet another shiny bivalve into the boat. Once we had our fill of diving, we climbed back into the dinghy one at a time and, with a pang of regret, tipped our catch back into the gentle blue waves—these pristine waters are federally protected, and fishing is banned.

Fortunately, the organizers were pros. A pair of local fishermen pulled a sack of the clams from a pickup truck just as we tumbled out of the boat and into the clear, shallow water, craving salt, beer, and lunch after our dive. Earlier that morning they had shuttled these glossy monsters, nearly 4 inches wide, from beds outside of the regulated park zone for us to share on the beach. On an upturned cooler, Gomez wielded a heavy kitchen knife to split a clam open. He skillfully tilted one shell down as he pulled them apart, catching every drop of the clam’s liquor as he twisted the other half away.

He carefully sliced the clam from the remaining shell, trimmed away the sandy bellies, then sliced the meaty red muscle that remained into bite-size bits. Using the edge of the knife, Gomez transferred the meat back into the juice-filled shell, doused the whole mess with a splash of vinegary red hot sauce, a pinch of Tajín, and a squeeze of fresh lime—the trio of casual toppings preferred by locals—and handed it to me to slurp as I sipped my Corona and ran through the math of uprooting my whole Manhattan existence to the Baja Peninsula. Taking a cue from Gomez, I tipped the remaining juices right into my drink for an improvised spicy michelada.

Gomez, who is originally from Argentina, has cultivated an appreciation for the spicier elements of Mexican cuisine that Argentines often shy away from, as well as an appreciation for the staggering marine biodiversity surrounding the Baja Peninsula. On our way back to civilization, he pulled the ATV over to let me get a grip on my motion sickness and admire the sparkling Sea of Cortés. He pointed out a shrimping boat far offshore, which was pulling in its net. While shrimp farming exists along the Pacific Coast operating with varying degrees of sustainability, Gomez prefers to special-order wild shrimp, live and with their heads still attached, from boats like these. “When you eat the juices from the head, they should be sweet. When they aren’t fresh, the juices are bitter and sour.”

For less adventurous guests, Gomez prepares a clambake lunch right on the private beach at Esperanza Resort, though even while tending the grill, he can be coaxed onto the nearby rocks for an impromptu hunt for sea snails, crabs, and uni. At Cocina del Mar, the resort’s dramatic cliffside restaurant, the fish fanatic Gomez offers farm-raised totoaba on the menu—a pillowy, tender white fish with massive, buttery, halibut-like flakes that he steams wrapped in root-beer-scented hoja santa leaves. The wild catch of this critically endangered fish is strictly prohibited, but recent local aquaculture projects aimed at restoring the population have opened up the sale of the once-abundant native fish. The sale of farmed totoaba is restricted to domestic buyers only, so, like the region’s chocolate clams, one must travel to Mexico to taste it.

As in so many other parts of the world, overfishing along Mexico’s coastlines is a problem, so for several larger varieties of local fish like the totoaba, or kamachi, which he buys from Omega Blue in nearby La Paz, Gomez sources from sustainable farms. He sources the chocolate clams for the restaurant from an approved fishery north of La Paz in Loreto Bay. “We take care of the season when the clams need a recovery, when they are in reproduction time. So there are four months a year where the clams are not available,” says Gomez. A lot of people here live from the product of the sea. There is a good consciousness of seasonality, so I think we just need to keep promoting that they are not really to be enjoyed through the whole year.”

The clams’ range extends from Laguna Ojo de Liebre in northern Baja California Sur as far south as Peru, and they are also abundant throughout the Gulf of California. Like many developing nations, Mexico has experienced challenges to enforcing fishery regulation, but the increased interest by some of Mexico’s top-tier chefs in sustainable practices brings much needed publicity and support to the collaborative efforts of environmental organizations, universities, and local fishing communities. Through Fishery Improvement Projects (FIPs), these groups are able to collaboratively address overfishing and other environmental threats as they relate to individual seafood populations.

While there are environmental organizations like the Environmental Defense Fund, Pronatura Noroeste, and Community and Biodiversity (COBI) working on improving the sustainability of Mexican fisheries, regulations are often inconsistently enforced on the local level. Pablo Álvarez Morales, a FIP manager from Pronatura Noroeste, Mexico’s oldest and largest nonprofit conservation organization, believes that it is essential that producers are also involved in seeking sustainable and realistic alternatives to manage their own resources. “Since the 1980s, overfishing in clams fishery at the Mexican Pacific and the Gulf of California has caused drastic drops in catch numbers,” he explains. “The overexploitation of these resources has occurred mainly due to scant regulation, open access, and overcapitalization in the fishery.”

COBI, a Mexican civil organization that aims to protect deteriorating marine ecosystems, has launched a sustainable clam fishery program in Puerto Libertad, Sonora, just across the Gulf of California. According to Francisco “Paco” Fernández, who manages the FIP, chef Gabriela Cámara purchases the bulk of the NGO’s clams and features them on the menu at her beloved Mexico City restaurant Contramar. By 2022, COBI’s goals for the Puerto Libertad FIP include the implementation of a detailed traceability program for the fishery and increased involvement and responsibility of the fishing community. Fernandez also stresses the importance of ensuring that there is a heightened awareness about sustainable fishing initiatives like COBI’s. “In Mexico, most consumers and tourists don’t care about sustainability,” he says. “We don’t have much information in stores, markets, and restaurants. Since two years ago we have been working with CONABIO [Mexico’s National Commission for the Knowledge and Use of Biodiversity] to develop a seafood recommendation program.”

Curious to get off the tourist track, I asked Gomez to bring me off-resort to try the local chocolate clams at a casual cevichería favored by his team of chefs.

We ended up at Mariscos El Güero Camarón, a popular chiringuito (beach bar) located at the edge of the Colonia El Progreso neighborhood of Cabo San Lucas, known by locals for its fresh seafood.

After passing a table of kitchen staff chatting over their lunch (chicken!), Gomez exchanged pleasantries with the proprietor. We settled into a table by the window and nibbled on fried corn tortillas. Almost immediately, a server and the owner plopped nearly a grocery store’s worth of bottled condiments—mostly hot sauces, with a handful of other savory options like La Choy soy sauce, Worcestershire, Maggi seasoning, Tajín, chile flakes, juicy, thin-skinned limes, and bowls of freshly-made house salsas: chiles toreados (a loose and spicy dressing made with minced white onion, habaneros, and soy sauce), pico de gallo, fiery, roasted salsa roja, and, surprisingly, tartar sauce.

Gomez ordered a platter of aguachile—ceviche-like morsels of shrimp and scallops, thinly sliced like carpaccio, bathed in a thin salsa verde, topped with slivers of red onion and lime zest. Within minutes, another server delivered a tray of ceviche served in chocolate clam shells. The crunchy-tender red clams were chopped more finely and tossed with citrus and chunks of of firm white fish, octopus, scallop, and shrimp. Then came the order of raw chocolate clams, served en su concha (on the half shell), unadorned and as wide as saucers.

Fernandez stresses the impact of overfishing these local treasures, mentioning that further south, beds off the coast of Acapulco have seen near total collapse. Today, nearly 70% of the commercial chocolate clam crop is harvested from the waters surrounding Baja California Sur; and while there is some experimentation going on with farming in nearby La Paz, they are still most typically caught in the wild. They grow in fine, muddy sand at depths from 1 to 12 meters, from which they are hand-harvested by divers working from small boats using “hookah”-style breathing equipment; the gas-powered air compressor and a long thin hose feed air to the diver, who digs for clams buried in the sand below. Safety regulations prohibit harvest at depths greater than 30 meters, a limitation which protects both divers as well as the deeper-dwelling clam population.

While climate change and pollution are having an observable, but as yet not measured, impact on the species, according to Fernandez, the main threat to chocolate clams and other Mexican shellfish is illegal, unreported, and unregulated (IUU) fishing.

People visiting the area who are interested in tasting the local seafood can support sustainability efforts by seeking out restaurants that publicize partnerships with FIP’s and other sustainable fishery efforts. Morales further recommends asking restaurants or markets for information about the product’s place of origin, and generally being an informed and responsible consumer about any seafood you plan to buy. For chocolate clams, that means at the bare minimum knowing the legal size limit, refusing to buy smaller clams which may not have lived long enough to reproduce, and only buying clams large enough that they have reached full maturity (that means at least 64 millimeters wide in the Gulf of California and at least 80 millimeters wide on the Western Coast of Baja California Sur).

Chef Yvan Mucharraz of Cabo San Lucas’s Chileno Bay Resort came up through Thomas Keller’s French Laundry before returning to Mexico, and he brought home with him an infatuation with American-style barbecue. While smoking brisket barefoot on the beach, Mucharraz often fires up a second, hotter smoker for firing off local seafood, including extra-large chocolate clams, which he stuffs with compound butter flavored with garlic, cilantro, green chile, and lime. He wraps the individual clams in foil before throwing them in the smoker or even, as a nod to the old-school method, directly into a fire pit in the sand. With their delicately briny bite, vibrant red flesh, and a seductive texture worlds apart from the Atlantic’s stodgy quahogs and musky, frail mussels, these clams, raw or cooked, are worth traveling for.