The best anchovies are pleasantly salty, umami-rich, plump, and luxuriating in good-quality olive oil or salt, ready for snacking or mixing into a bright vinaigrette or dip. They’re tinned or jarred, but they taste fresh; they’re a commodity with European panache, and tastes of the coasts from which they came, whether it's the cold waters of the Pacific Ocean, the Atlantic Ocean off the coast of Spain, or Italy’s Amalfi Coast.

There’s also a booming anchovy scene in the San Francisco Bay Area, where the season runs roughly from April to October. There, they are the star of The Anchovy Bar, a restaurant by chef Stuart Brioza, also of State Bird Provisions and The Progress, which is a culmination of the chef’s longstanding love affair with the oily little fish. Brioza receives anchovies at maximum freshness, less than an hour from having been in the water. “We cure our own during the season and serve them as fresh boquerones,” says Brioza. “We use lime juice, not vinegar. That’s the sort of heart and soul and inspiration of The Anchovy Bar, the Bay Area local anchovies.”

But when anchovy season is over in the Bay Area, Brioza brings in the best cured anchovies from around the world to pinch-hit, primarily sourced from Spain and Italy. “The goal was to really focus on ingredients that have strong ties to a specific place and that have either transformed or make that cuisine,” says Brioza. Based on his recommendations and our own depth of knowledge, we tested through over a dozen anchovies to choose the very best, from budget grocery staples to traditional hand-processed delicacies from Europe. 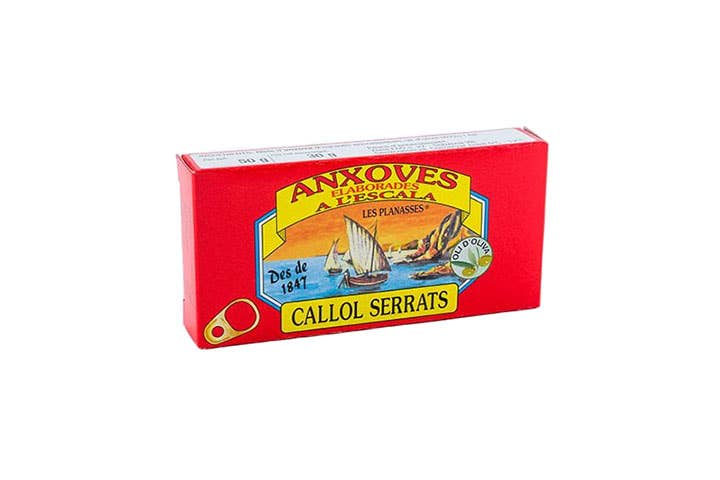 Why we chose it: The plump texture and mellow saltiness make these anchovies stars of the show, best eaten out of the tin or draped across pan con tomate.

One of the oldest producers in the Spanish town of L’Escala, which is known for its anchovies, Callol Serrats are a combination of Cantabrian anchovies caught in the local Mediterranean Sea and the Costa Brava, and cured for about six to nine months. “This renders a plumper anchovy, a little more rustic of an anchovy,” says Brioza. “The longer they’re cured, the more the skin really molts off, and they are pinker/redder with less time.” During the tasting, these were consistently described as plump, pleasantly salty, and sassy, with a springy, melt-in-your-mouth texture. 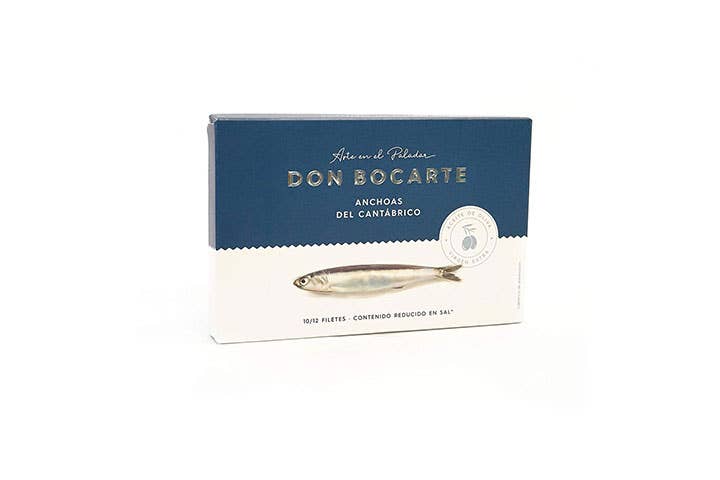 Why we chose it: The absolute Cadillac of anchovies with a buttery, melt-in-your-mouth texture and a clean, not overly salty taste.

Don Bocarte is highly favored among chefs, including Brioza, who serves them at The Anchovy Bar atop a creamy white bean anchoiade that’s been slathered onto fried sourdough and topped with long-roasted broccolini and orange zest. Part of their appeal is a longer cure time. “Essentially great anchovies are just salt and anchovies, and what makes great anchovies is the selection of the fish, the fishing and handling of anchovies, and the time from the moment they’re plucked from the water to the time they’re preserved in salt.” Their size is another factor, says Brioza, and the fact that they are tinned, not canned (which means that they never go through a heating process). ”Don Bocarte is after a very specific size and obviously they shrink as they’re cured; the whole process is all by hand,” says Brioza. “Hence the price tag.” 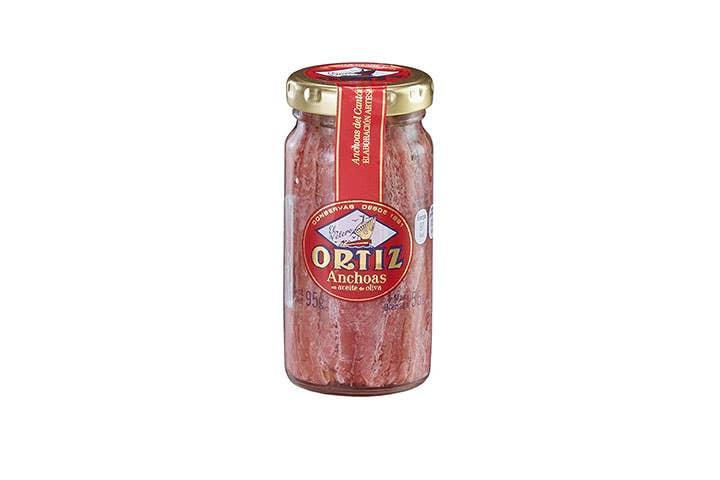 Why we chose it:  While slightly more expensive than other commonly available brands, Ortiz has the quality and versatility to justify being called the best bang for your buck.

Hailing from Northern Spain, Ortiz is most often found in jars, often with a tiny anchovy fork attached for easy removal. These filets have a firm bite, and good texture, according to testers, as well as a salty, deep ocean flavor. While clearly less bespoke than other brands like Don Bocarte and Callo Serrats, they stood up in both texture and flavor, and the olive oil in the jar is high quality as well. Testers felt they’d be good for sauce, with the right amount of saltiness and umami without being overly fishy. 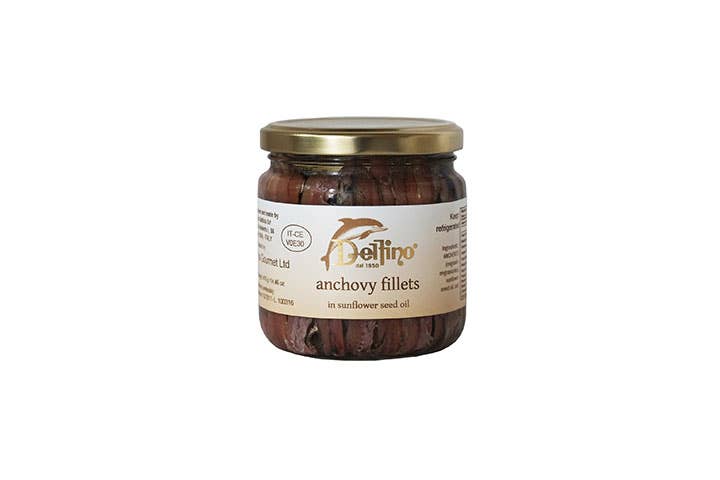 Why we chose it: A high-quality, multi-purpose anchovy that’s packed in sunflower oil and ideal for inclusion in almost anything.

“These are my workhorse anchovies,” says Brioza. “I’ll make a caesar dressing with these anchovies. I’ll make a little anchovy salsa, a puttanesca sauce, or top a deviled egg with these. They’re not center of the plate anchovies, but they’re delicious, a little saltier.” Tasters agreed that these anchovies had a “clean taste,” and smooth texture with just enough saltiness. These are great for whizzing into a spread or dip like Brioza’s anchoiade recipe. Testers described these as oily and luxurious in the mouth, and not overpoweringly salty.

The anchovies that scored least favorable among testers were both the cheapest and mass-produced, as well as the most available on grocery store shelves. No surprises there: You usually get what you pay for, but anchovies might be one of the best examples of quality that increases proportionally with price. The carefully caught anchovies that are immediately hand-processed and packed with high-quality olive oil won the taste test hands down. However, that doesn't mean that brands like Cento, Roland, or Crown Prince aren't worth keeping on hand in the kitchen. They're perfectly serviceable in a batch of sauce or dressings—not eating on their own— but they won't provide 'wow' factor or change the mind of anyone who doesn't already love anchovies. All three had spikey bones, extreme salt content, and very fishy-smelling oil in their tins.

We spoke with chef Stuart Brioza, chef-owner of San Francisco's The Anchovy Bar for his insight and recommendations; Brioza has traveled to the production facilities for many of the anchovies recommended and tasted his way through dozens to find the very best to use in his restaurant. He also has a deep knowledge of the little fish and cures his own. A group of tasters, including senior editor Ellen Fort, blind-tasted over a dozen different anchovies to determine the very best in terms of flavor and texture.

Features to Keep in Mind When Shopping for Anchovies

After anchovies are harvested, they’re cured in salt for 6-12 months, depending on the producer. When the anchovies are “ripe”, they’re rinsed and tinned or jarred in olive oil, or packed in salt once more. During this process the anchovies shrink as the salt dehydrates them, giving them a concentrated, fishy, salty taste. When cooking with anchovies, like a pasta sauce or salad dressing, it’s a good idea to taste them on their own to determine their salinity to avoid oversalting your dish.

Texture is a surprisingly important component of what makes an anchovy one of the very best. The best anchovies are free of bones with a plump, toothsome texture. Good quality anchovies should retain their shape, even when removed from the tin with a blunt instrument (one reason the aforementioned Ortiz forks are handy). Our testers identified texture as one of the main differentiators between the mass-produced brands like King Oscar and Crown Prince versus hand-processed brands like Don Bocarte and Callols Serrats.

Anchovies are tinned, not canned, which means that they are sterilized and sealed but are not heat treated. As a result, it’s best to keep tins and jars of anchovies in a cool or refrigerated space until they are opened; once opened, make sure that they remain covered in oil or brine and tightly sealed in the refrigerator to maintain freshness. An unopened container will continue to cure until opened, much like wine or cheese, though the texture of the anchovies may degrade over time.

While both are excellent methods of preserving anchovies, oil-packed are Brioza’s choice. “They’re doing the least amount of work [with salt-packed],” says Brioza. “They’re kind of like a peel and eat shrimp: they do have value there’s just a lot more work on your end. [Salt-packed] are still on the spine, and need to be to soaked and peeled and tossed with olive oil. I think they have incredible value, but I haven't found one that I’m in love with that has been a ‘center of the plate anchovy’.” Brioza’s choices for use at The Anchovy Bar—Don Bocarte, Delfina Battista, and Callol Serrats—are all packed in oil and ready for immediate use.

Anchovies are sustainable by nature: They are small schooling fish that are often caught as bycatch while fishing for the larger fish that like to feed upon them. The producers based in Cantabria and the Mediterranean Sea are forced to keep their fishing local because of the importance of processing the fish while fresh during the season.

Q: Why are anchovies so salty?

Anchovies are cured in salt after they’ve been harvested and had their heads and innards removed. They’re laid flat in large drums, layered in sea salt, and allowed to cure for anywhere from 4-12 months, depending on the size of the anchovy. The salt removes water from the fish during this time, deeply concentrating the flavor. They're washed and dried before they're then submerged in olive oil and tinned or jarred, but the salt-cure remains a very prevalent component.

Q: How do you eat anchovies?

Anchovies can be consumed a variety of ways. The highest quality anchovies are a treat—albeit salty—straight from the tin, or simply on a piece of good bread spread with great butter.

Q: How long do anchovies last in the fridge?

As with most cured and preserved items, anchovies can improve over time in the fridge. However, it's best not to let them linger too long after opening. Make sure to keep any leftover anchovies covered in oil or brine to prevent spoilage. Ortiz recommends eating opened anchovies within five days of opening, while others recommend several weeks. Just make sure there's no mold or rancid fishy smells (you'll know the difference between regular fishiness, we promise) before consuming.

Q: Do I have to cook anchovies?

No. Anchovies are already cured and preserved, whether in salt or olive oil. However, cooking with anchovies is a great way to add a punch of umami to a dish, that nutty, salty, earthy component that makes things like pasta with garlic, anchovies, and chili flakes, really pop. Besides pasta sauces, preparations like caesar dressing, dips, or spreads are also great uses. Brioza uses them in all those ways and more, including an anchovy salsa that's an adapted version of a bagna cauda from chef Renee Erickson that incorporates currants, hazelnuts, chopped anchovies, garlic, and parsley served on raw slivers of fennel or apples.

Q: What country has the best anchovies?

While the Northern Anchovy can be found in various parts of the world, Brioza ascertains that the best anchovies come from Spain, specifically Cantabria, the Northern coast. “Cantabrian anchovies are gorgeous, these are from Northern Spain and they are a type of anchovy that is sort of superior to all anchovies in the world, mainly because of their size. The size of them can be six or seven inches long which is big compared to the anchovies we see here in the Bay Area that are four to five inches long, and that makes all the difference."

While the best anchovies are harder to get and cost a little more, the payoff is worth it for fans of tinned fish, and are easily the star of a dish where they're draped across a toast, salad, or deviled egg. If you plan to use your anchovies in applications where they might take second fiddle to other ingredients, like a cooked tomato sauce, then standbys like Cento or Ortiz will certainly do it justice. Regardless of which you choose, this list has many fine fish. 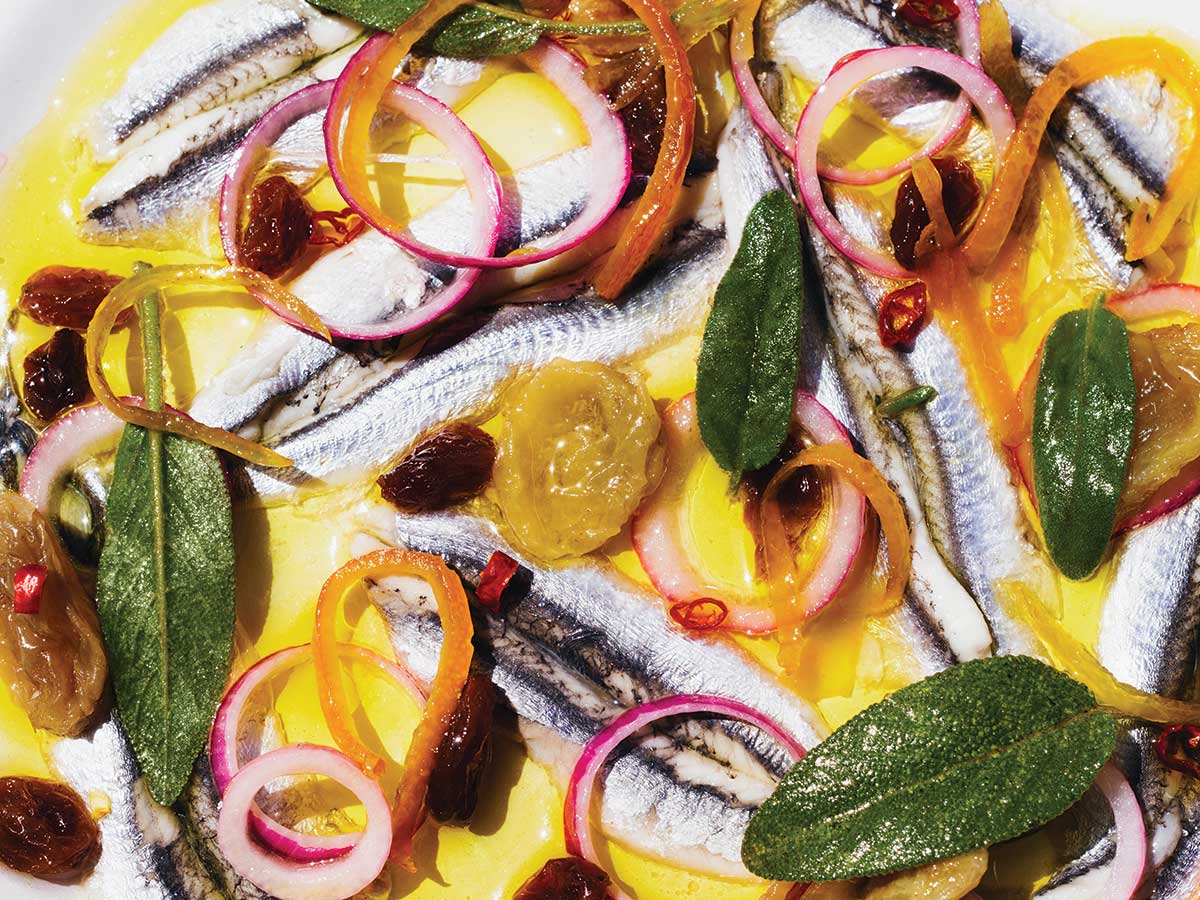