Making coffee in a French press requires few special tools and no honed skills, cementing it as a perfect entry point for home brewing newcomers. It’s also an ideal method for even the biggest coffee nerds when away from their tricked-out home set-ups; Maciej Kasperowicz, the Director of Coffee for subscription coffee company Trade Coffee, says he mostly uses a French press when visiting his parents.

French press is less fussy than many pour-over methods, as it doesn’t need to be brewed in specific quantities or require you to add water in increments. Nick Cho, the co-founder of San Francisco’s Wrecking Ball Coffee (and TikTok star, known as Your Korean Dad) likens it to a slow-cooker’s place in the kitchen. “You don’t have to stand over it,” Cho says. It also brews a better, fuller-bodied cup of coffee than instant coffee or many drip machines—much like the heartiness you’d get from food made in a crockpot, rather than a microwave.

When it comes to finding the best French press coffee makers, the differences in the quality tend to be very subtle. The main differences come down to material: The classic glass or plastic carafe models tend not to hold in the heat as well as the double-walled models (usually stainless steel). But for many, a French press is an opportunity to add some color into your kitchen or match your decor. “Aesthetic is a big thing,” says Kasperowicz. These are our top picks. 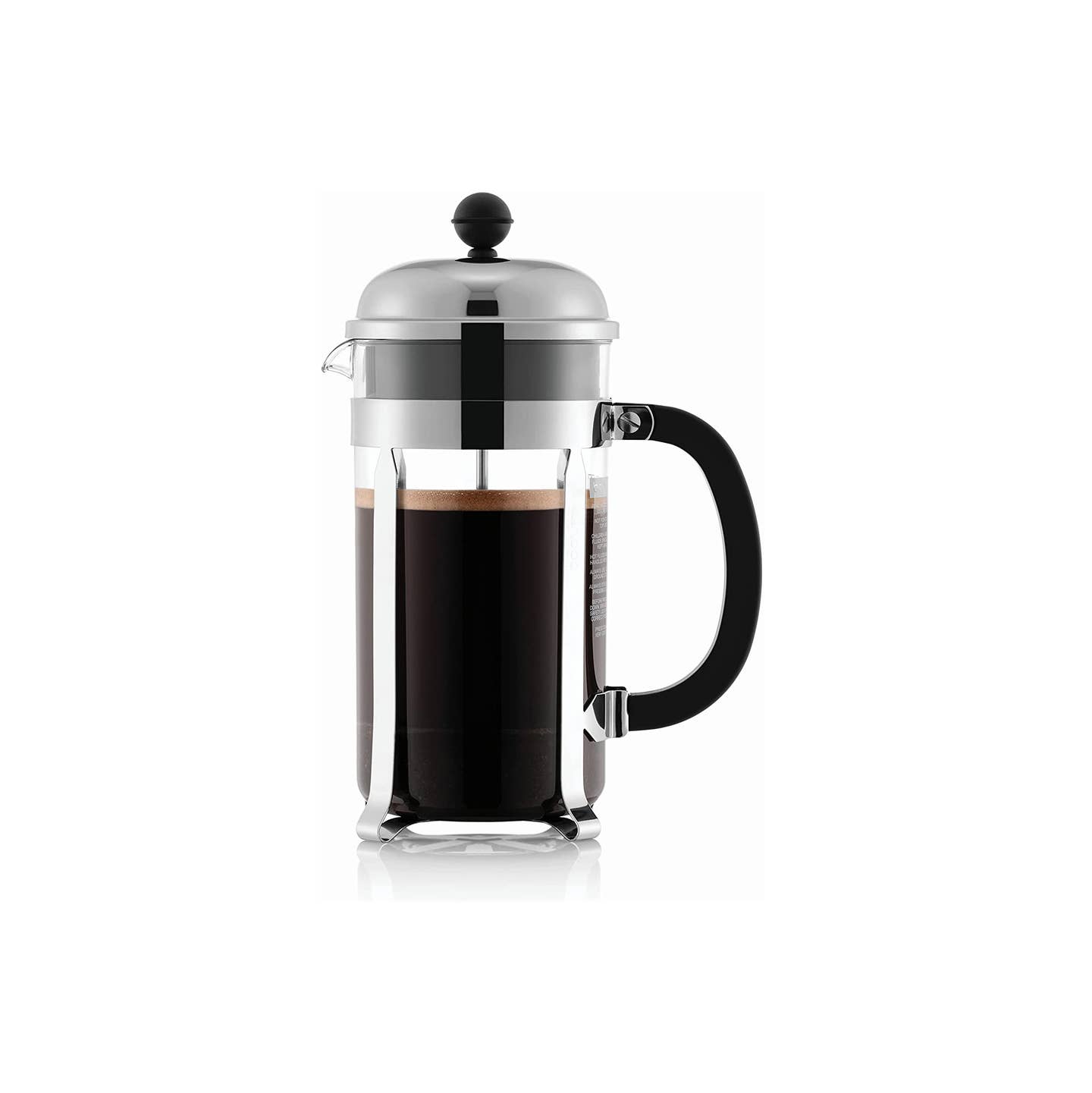 Classics earn their title for a reason, and the category-defining Bodum Chambord is no exception. Kasperowicz and Cho both agree that there’s no need to deviate from this standard unless you desire a different material or aesthetic. It’s simple, but the timeless glass Chambord does come in a wide variety of colors. Cho also likes that owning a widespread model makes it easy to find replacement parts, should anything break. 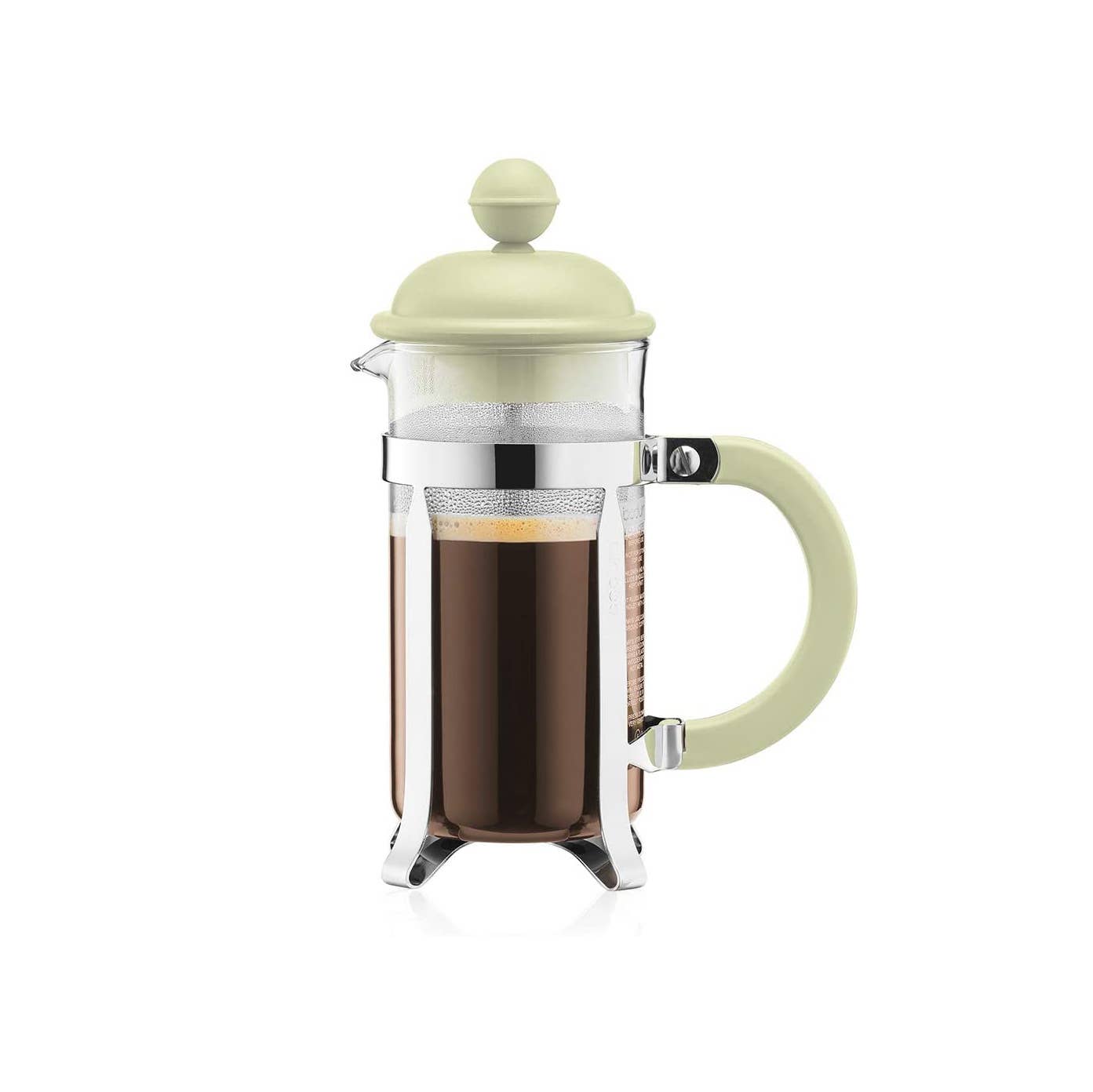 If price matters most, this plastic model is the best French press coffee maker for you. It’s nearly identical in function to the Chambord, but costs half as much. The variety of colors, ease of purchasing, and classic look remain the same—without any danger of breaking the glass beaker. Plastic does get cloudy and show scratches easily, but for many, it’s a good trade for shatter-free portability. 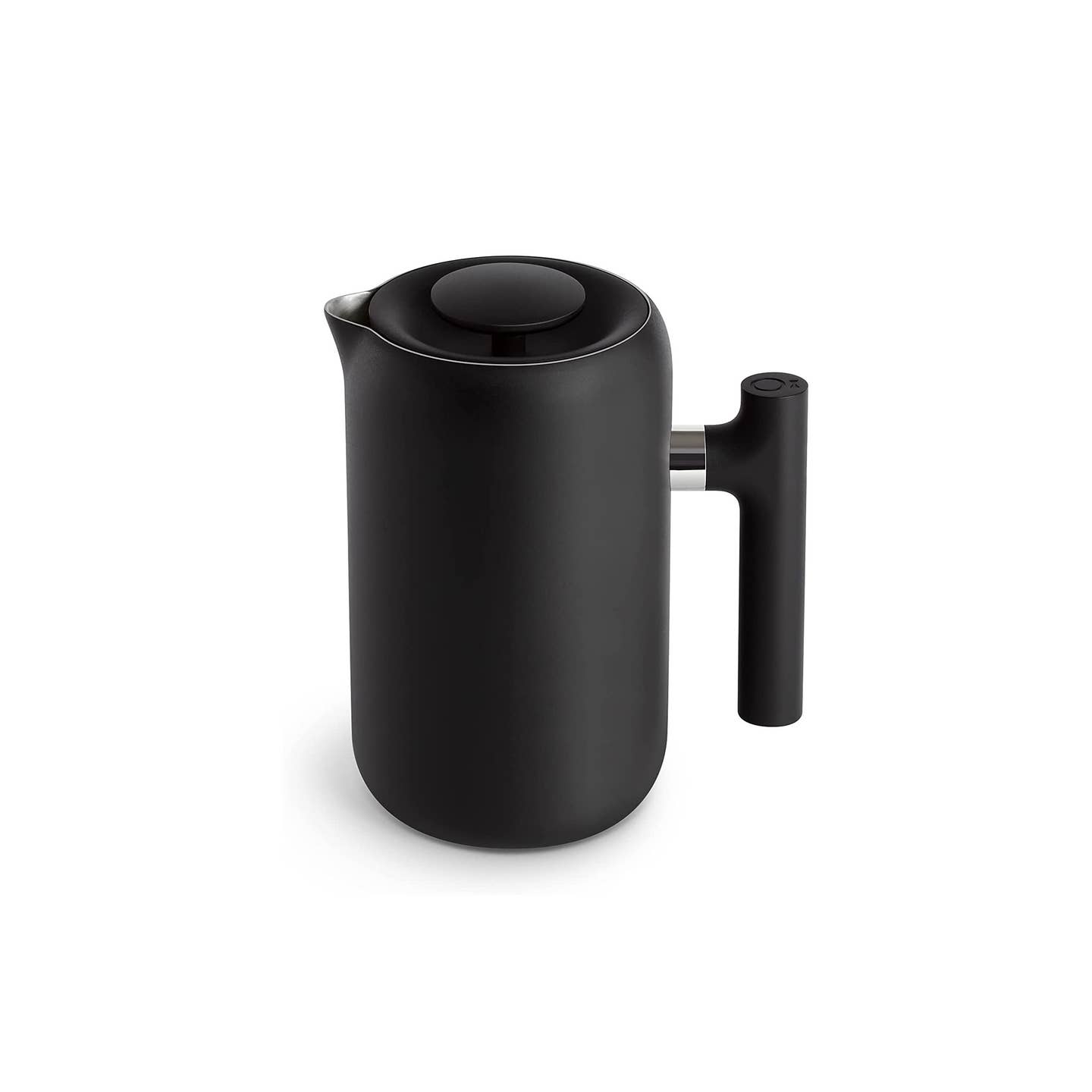 Fellow’s attractive signature kettles designed for more technical styles of brewing make it a favorite brand of coffee nerds. Their French press retains the same modern look and brings equally impressive advances in design with the double-walled insulation (which also means the outside is never hot to the touch), like a lid that pours easily in any orientation, fill lines for easy measurement, and a perfectly fitted agitation stick. But those advances bring a big price jump and only incremental improvement in the flavor of the coffee. You’ll really be paying for nice design here, which perhaps isn’t unreasonable for an appliance that could live on your countertop or be a brunch showcase. 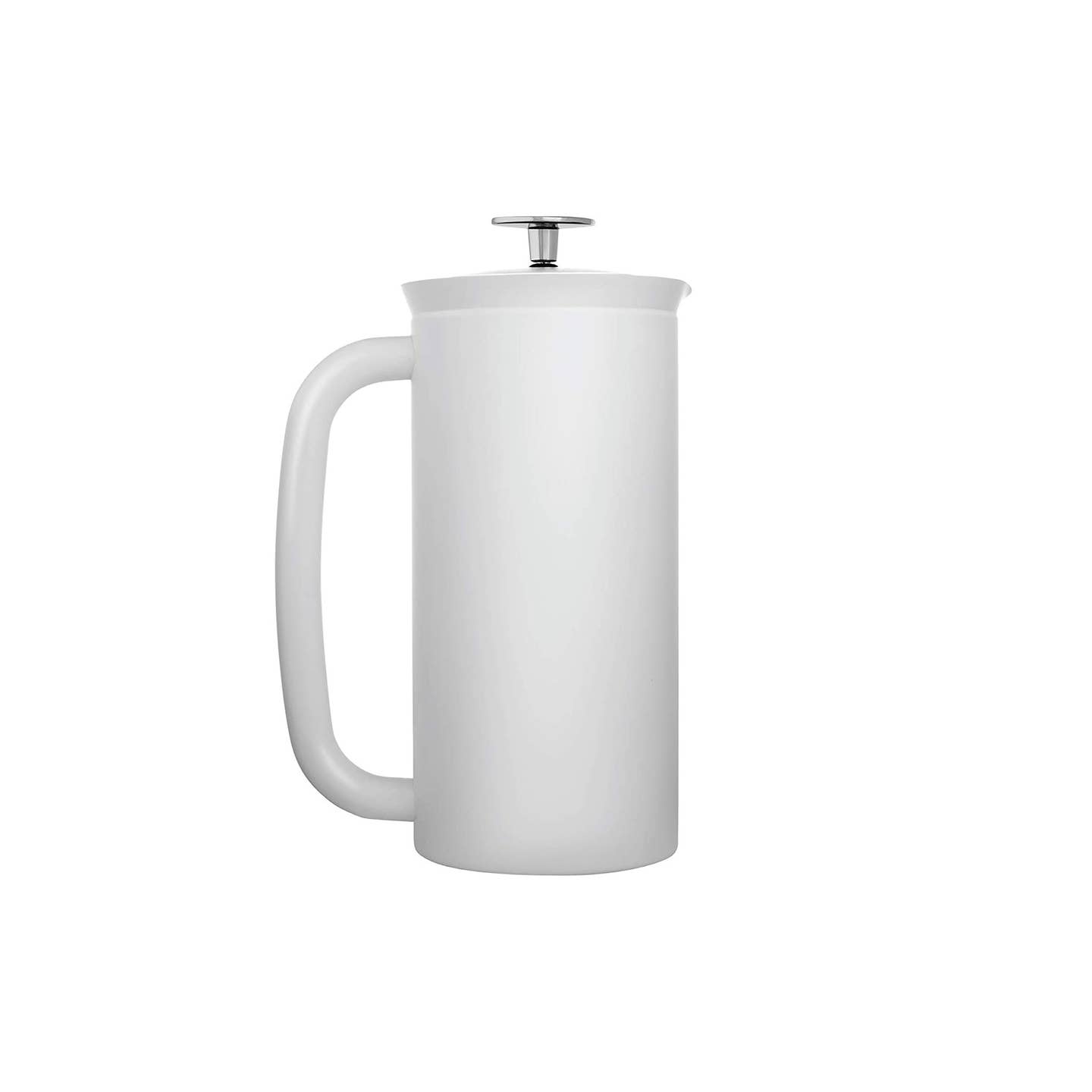 Both Cho and Kasperowicz say the Espro has many characteristics of a next-level French press. The double-walled stainless steel looks sleek and retains heat. It also does reduce grit or fine silt to some extent through its double filter system—which also seals off when plunged to stop extraction so you don’t need to rush to get the coffee out.  We’re not alone in our appreciation: One of Espro’s earlier models is Wirecutter’s top pick and top upgrade choice.

French press coffee makers all tend to be fairly similar in their mechanics: a carafe that holds coffee grounds and hot water, then a plunger mechanism with a mesh filter that you push down after the water extracts the coffee. The key differences often lie in material and aesthetics, like the colorful Bodum Chambord or sleekly modern Fellow Clara. Some models come in multiple materials, so you can mix and match material and design style for the perfect French press.

All French presses have a plunger and built-in filter. Some higher-end models, like the Espro P7 and the Fellow Clara, try to reduce the inevitable silty coffee sludge at the bottom of the press through fine mesh filters. It’s a nice bonus but nothing will get rid of the finest grounds, Cho explains, because if the screen were fine enough to significantly filter them out, like a paper filter, it would be difficult to plunge.

Unlike many other countertop coffee brewing methods, a French press can make a wide range of quantities. In other words, you can easily make just one cup in a four-cup version. If you occasionally brew coffee for larger groups, consider getting a larger model. It will work fine for single-use too. When buying, be aware of how many ounces of coffee the press makes, rather than relying on the number of cups. For example, a standard "eight-cup" version will often make around 32-34 ounces (less than three Starbucks "tall" coffees).

The biggest decision in choosing the best French press coffee maker for you comes down to its material. Glass is classic: It looks nice, goes in the dishwasher for easy cleaning, and brews good coffee. However, for the klutzy folks out there, it can be an accident waiting to happen – especially since you’ll be handling it uncaffeinated. Both plastic and stainless steel are more durable, though the plastic tends to get easily scratched up and cloudy. "It's just going to be ugly," says Cho.

The double-walled stainless steel ones are basically shatterproof, but generally cannot go in the dishwasher. They offer another benefit: “Something that retains heat better will be more consistent,” explains Kasperowicz. Though stainless steel itself isn’t very insulating, most of the French presses made of it are double-walled, which means they retain heat well. Single-walled models lose heat faster, so you may want to start with hotter water to accommodate for the fact that the coffee will cool off quickly.

Fragile glass French presses don’t travel as well as plastic or stainless steel ones. For cold mornings camping or anywhere else where the chill might cool your coffee more quickly, double-walled stainless steel’s insulation will be most effective at keeping the coffee warm throughout the brewing process.

Is there an ideal process for making French press coffee?

Kasperowicz sticks to a fairly traditional (and somewhat strong) brewing method: a 15-1 ratio of water to coffee, by weight. He adds all the water at once, stirs once at 30 seconds to make sure there are no dry coffee grounds, then adds the plunger and plunges at four minutes. As Cho says, “If the grounds aren’t drowning, they aren’t brewing.” Cho prefers to stir gently around one minute, then plunges about one-third of the way down to make sure he really dunks the grounds. He suggests pulling the plunger up a little to agitate, if it looks like your grounds aren't getting really soaked. He then lets it sit for six to eight minutes before plunging and pouring. Once the coffee is ready, it's best to pour right away to avoid overcooking or over-extracting the coffee, which results in bitterness.

Cho also offers a tip for measuring if you don’t happen to have a scale for Kasperowicz’s ratio.“Most French presses are designed so if you plunge all the way down, that’s a full pot,” he says. Just push the plunger all the way down and note where it stops in the carafe, then fill it to that point with coffee grounds.

Coffee grounds must be dumped in the garbage (or compost!) instead of going down the drain. Cho suggests using a rubber spatula to scoop the grounds out from the bottom of the French press before giving it a rinse. He also suggests taking a picture of the assembly instructions to reference when you disassemble the plunger for a thorough cleaning, and giving the anchor mechanism a gentle turn to the right after each use to keep it tight. "It doesn't spin," he notes, so anytime you see it rotating, it's working itself looser and will eventually fall apart. Luckily, it will easily fit together again.