One Ingredient, Many Ways: Rhubarb 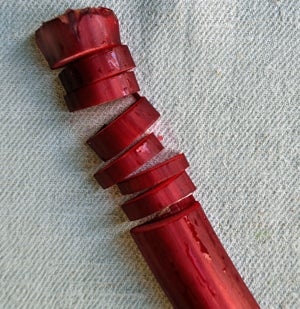 My mother was our household’s primary cook while I was growing up, and she is allergic to rhubarb’s most faithful companion: strawberries. Her severe aversion (she recoils at a mere mention of the crimson fruits) meant no strawberry-rhubarb jam to spread on our toast, and certainly no strawberry-rhubarb pie with its sweet-tart juice running like a river underneath a layer of butter-browned crust. Without a classic like that — in America, rhubarb is colloquially known as “pie plant,” after all — what do you have left?

As it turns out, quite a lot. After leaving my parents’ house and establishing my own home where strawberries were welcomed, I also opened my kitchen to rhubarb. In the spring I regularly picked up bunches of the sour, blushing stalks at the farmers’ market, and back home I stripped off their crown of toxic leaves, then simmered hunks of the fruit with lime zest, ginger and sugar until it softened into pink compote, perfect for topping rice pudding, yogurt, or ice cream. Other times I’d take a cue from the British (among the first culture to elevate rhubarb from medicinal plant to culinary champion) and baked it into glistening tarts. And of course, I made lots of strawberry rhubarb pies, happily enjoying the previously forbidden pairing.

More recently, I learned of rhubarb’s applications beyond dessert. In some countries, rhubarb is treated as a savory vegetable — in Poland, it marries with potatoes and mushrooms in a gratin. Rhubarb’s lemon-sour flavor also blends well with fish and meat dishes, and it’s a tart addition to soups. The vibrant red-green stalks can typically be found in the markets from early spring through mid-summer, and I plan to indulge accordingly.

Rhubarb Pie
A specialty in Iowa, this pie is made with fresh rhubarb when in season, although frozen will do when not in season. Finish it off with a scoop of vanilla ice cream.

Rhubarb Ginger Crumble
Spicy ginger is the perfect foil for rhubarb in a sweet crumble.

_Food 52:_Bison Flank Steak with Rhubarb
Marinated steak gets cooked with rhubarb, bourbon and spices for a tangy main dish.

** Strawberry Rhubarb Smash**
The iconic spring pair is mixed with bourbon and mint in a refreshing spring cocktail.

Leah Koenig is a freelance writer and author of The Hadassah Everyday Cookbook: Daily Meals for the Contemporary Jewish Kitchen.