The two types of persimmon you're likely to see in your grocery store are both varieties of a single foreign persimmon known as oriental persimmon. 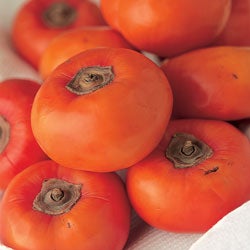 Because American persimmons do not fully ripen off the tree, and because, when truly ripe, they’re too squishy to be shipped, they’re rarely sold commercially. The two types of persimmon you’re likely to see in your grocery store—the acorn-shaped hachiya and the squat fuyu, which looks like a tomato—are both varieties of a single foreign persimmon called Diospyros kaki, also known as oriental persimmon. _Diospyros kaki _is originally from China and has long been popular there as well as in Japan, Korea (where it’s practically the national fruit), and Italy; for the past hundred years, it has been cultivated in California, and is sold throughout the country from mid-October through December. (Chilean persimmons are sometimes available from April through May.)

Like American persimmons, hachiyas are extremely astringent when underripe; one bite, and you’ll be unhappily puckering for minutes. (Unlike the natives, though, they do completely ripen off the tree.) Hachiyas are ready to eat when their skins have turned flame orange and translucent and the flesh within has softened into jelly; when ripe, they look and feel like gorgeous, delicate little water balloons and are honey-sweet, juicy, and loaded with vitamins A and C. The fuyu, on the other hand, is totally without astringency. Even when fully ripe—its color will be a rich apricot—it has a crisp yet silky texture, something like that of a firm papaya. The fuyu is also sweet but less cloyingly so than the hachiya, and its flesh has nuances of plum and peach. Neither type has seeds, as a rule, and both can be peeled and eaten just as they are or used in simple desserts or side dishes. A few suggestions:

• Freeze a hachiya persimmon; then let it thaw for 3 to 4 hours in the refrigerator. Put it, stem end down, on a plate, and, with a knife, slit the skin in sections from pointed tip down to stem, peel it back, and eat the “instant sorbet” inside.

• Peel back the skin of a ripe hachiya as described above, and pour creme fraiche or cream over it—and then maple syrup.

• Braise fuyus instead of apples with pork.