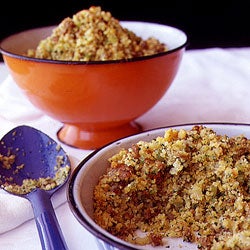 Recipes for stuffing—also known in some circles as “dressing”, apparently for reasons of Victorian modesty—vary according to taste, geography, and/or ethnic heritage. Rice and pecans show up frequently in stuffings from the South, as does, not surprisingly, corn bread. Corn bread made at home from scratch greatly improves this stuffing.

Corn bread frequently shows up in stuffings, like this one, from the South.
Yield: serves 10-12