Duck Breast in Brandy Sauce with Truffles and Mushrooms 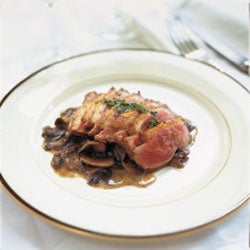 (Magret de Pato Perfumado al Brandy con Trufas y Setas)
This dish goes back to 1960s Spain, where it was served by Swiss chefs Otto and Urs Muller at El Bulli, the beachside shack in the coastal town of Roses they transformed into a legendary Michelin-starred restaurant.