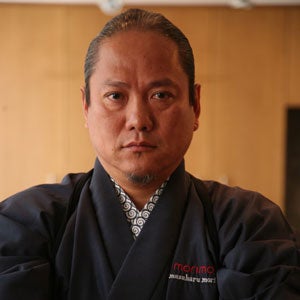 We recently invited Masaharu Morimoto to the SAVEUR test kitchen to demonstrate two fundamental Japanese knife techniques that exemplify the precision knife work at the heart of Japanese cuisine. Though Morimoto, chef and owner of the Japanese fusion restaurants in New York and Philadelphia that bear his name and a legendary competitor on the Iron Chef television show, owns a collection of more than 80 custom-forged blades, he uses only a handful of traditional Japanese knives—including the yanagi and the kamagata usuba (see Five Principle Styles of Japanese Knives)–for his day-to-day cooking.

Katsuramuki Crunchy raw daikon radish is an essential garnish in Japanese cooking; in this preparation, Morimoto, using a technique called katsuramuki, transforms the daikon to an ultrafine julienne.

1. Holding his broad-bladed kamagata usuba with a relaxed grip, Morimoto trims the ends off the daikon.

2. Then he uses the knife’s tip to cut the vegetable into paper-thin sheets to create a six-foot-long scroll.

3 Next, Morimoto cuts the scroll into three-inch-wide squares.

4. He stacks the squares in a neat pile.

5. Finally, using the fingers of his left hand as a guide (taking care to keep his fingertips tucked in), he slices the sheets into a julienne with a firm, repeated up-and-down motion.

Sharpening The single-edged blades of traditional Japanese knives require regular care and maintenance. A well-sharpened edge—achieved through the use of a fine-grained whetstone—is essential for the knife techniques shared by Morimoto.

1. Holding the knife at a 45-degree angle to his body, with the blade facing him, Morimoto places the blade’s cutting edge almost flat against the moistened stone and very gently pushes the blade away from him repeatedly across the stone, working his way from tip to hilt.

2 To determine whether his blade is sharp enough, he runs the edge lightly across his thumbnail; if the blade snags, he deems the knife ready to use. (This is not a method we recommend for home cooks.)

Sogi Giri This elegant sashimi preparation offers a beautiful example of how Japanese chefs use the knife, and often nothing more, to achieve a striking aesthetic transformation between kitchen and plate.

1. Working from one end of an eight-inch-long slab of raw bluefin tuna, Morimoto holds his yanagi at an angle and makes a bias cut, smoothly pulling the knife back toward him slicing from hilt to tip while resting his fingers gently on the fish—a knife technique called sogi giri—to produce paper-thin, diamond-shaped slices.

2. He repeats the same cut, working his way across the slab, laying each slice aside as he goes.

4. As a final flourish, he rolls the strip of slices into a tuna “rose”.