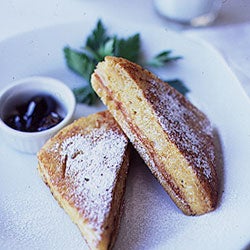 To us, a leftover holiday fowl is a culinary call to arms, awakening our creativity in the kitchen. Here are three easy post-feast dishes that make great use of each part of the bird.

The monte cristo sandwich could be considered the distant American cousin of the croque monsieur; it’s an excellent upgrade from the typical dry turkey-breast sandwich. Layer a few slices of turkey breast and swiss cheese between 3 slices of buttered white bread. Dip the sandwich in a mixture of beaten egg and milk; fry in butter until crisp and golden brown.

The dark, flavorful meat from the wings makes for a very good hash. Fry some chopped onions and peppers in a heavy pan with a lot of butter. Add some cut-up boiled potatoes, chopped turkey, and a few dashes of worcestershire and hot sauce. Fry until well browned. Finish with a little cream. Serve with ketchup and a bottle of beer.