Should This Wine Exist? 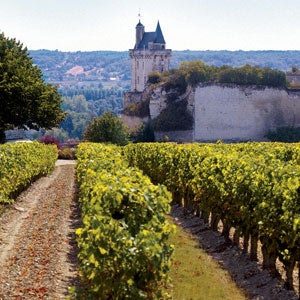 From the ramparts of Chinon’s crumbled castle, on a modest hill overlooking this picturesque town of some 9,000 souls, you can see most of the serious red wine vineyards of the Loire Valley. The Chinon appellation covers 4,500 acres northwest and southeast of the castle, on both banks of the Vienne River. The appellations named for Bourgueil, once the site of an important Benedictine abbey, and St-Nicolas-de-Bourgueil, a 19th-century “new” town, amounting to another 4,800 acres between them, occupy an east-west strip a bit farther away, on the Loire’s right bank. Some excellent red wine is also made just beyond eyeshot of the castle, near the village of Champigny, and a small amount of fine pinot noir is produced far upstream in Sancerre—but in general, beyond the immediate landscape, the Loire is overwhelmingly white wine country.

Indeed, the question has been raised as to whether serious still wine can be made at all from red-wine grapes grown so far north, since these varieties generally need more heat to ripen than their white cousins and when picked prematurely tend to yield herbaceous, astringent wines. But as vintners in Chinon, Bourgueil, and St-Nicolas point out, their vineyards enjoy an unusually protected site. A forested plateau along the northern edge of Bourgueil acts as a weather break for the whole region, buffering it from Atlantic storms, boosting temperatures, and diminishing rainfall. And, most years, mild winters, early springs, and long, warm summer evenings assure sufficient heat accumulation for ripening.

The question might also be raised as to whether the grapes grown here are the right ones. Local vineyards are planted almost entirely to cabernet franc—a variety used in Bordeaux for blending, mostly as a minority component in wines dominated by merlot or cabernet sauvignon. British wine guru Jancis Robinson, reflecting a widely held view, feels that cabernet franc is intrinsically lean in structure and seems to require the “complement” of merlot—and adds that it languishes “in the shadow of cabernet sauvignon”. Nonetheless, the best cabernet francs from the Loire are impressive, veritable symphonies of raspberry, cherry, cassis, licorice, and violets seasoned with spice, black pepper, and leather.

The winemakers of Chinon tend to emphasize the finesse and elegance of their wines. Those of Bourgueil insist that their own vintages are earthier, fruitier, fuller, and spicier than those of their neighbors. In St-Nicolas, vignerons admit that their wines are softer and more precocious than those of Chinon and Bourgueil but argue that they are also more delicate and refined. Unbiased tasting tends to belie these distinctions. The three appellations may, however, be usefully deconstructed into soil-based wine styles that crisscross appellation boundaries. Light, fruity, palate-pleasing, early-maturing wines, known locally as vins de sables (sand wines), come from grapes grown in sandy, gravelly riverbank terraces—in all three appellations. Headier, more aromatic wines—vins de plateaux (plateau wines)—come from slightly more elevated sites where gravel coexists with loam and clay. Vins de coteaux (hillside wines), the fullest in body and deepest in flavor but also the most tannic and slow-maturing, are made from sloping vineyards where the topsoil is mostly clay but the subsoil is laced with limestone.

Jacques Puisais, a Tours-based enologist much revered by winemakers all over the region, says (with a touch of hyperbole) that these three soil types mark the wines so indelibly that they “do not taste as if they come from the same grape”. Consumers should not expect to find the terms sables, plateaux, or coteaux on labels, though. Some producers and negociants blend the soil-based distinctions away, believing that a cocktail of flavors and textures makes better wine than any one type would on its own. And those who preserve the distinctions are apt to label their various cuvees with unhelpful proprietary names, or with the names (sometimes concocted) of vineyards. In a reference to gravelly terroir, for instance, Couly-Dutheil in Chinon, the area’s most important negociant, uses the name Les Gravieres for its early-drinking blend— but also labels a wine grown on gravel as Le Domaine de Versailles. Olga Raffault, a respected Chinon producer since the 1940s, makes her home on the sandy and gravel-laced soils close to the confluence of the Vienne and the Loire, but her cuvees take the names of lieux-dits throughout the appellation—Barnabes, Peuilles, and Picasses—masking their soil-based pedigrees. The list goes on. This confetti of vineyard and proprietary names serves the admirable purpose of preserving diversity, but it’s scarcely helpful to neophyte consumers.

The use of new oak is another variable. It was once unthinkable here—traditionalists say it kills the wines’ bright fruit and robs them of their typicity (neutral wood or older wood, cement, or stainless steel is generally preferred)—but some of the cuvees now being produced here in new oak by some of the region’s best winemakers are hard to dismiss. In Cravant-les-Coteaux, Christophe Chauveau, who makes the wines at his family’s Domaine Daniel Chauveau, matured his 1996 old-vines cuvee in large, new wood foudres, lending it delicious wood-derived spiciness. And in St-Nicolas, Frederic Mabileau uses a portion of new wood barriques for his spectacular (and, yes, atypical) L’Eclipse and Les Coutures cuvees—wines that will surely change the perception of the appellation.

The red wines of the region, nearly everyone familiar with these appellations agrees, have, in general, improved dramatically in the past generation. The incidence of green flavors has declined, textures have gained opulence, and many more wines are being made specifically to age. The spread of estate bottling and the evolution toward style-specific and vineyard-designated wines have played key roles, as have advances in viticultural savoir faire. Locally, no one has done more to apply new techniques than Charles Joguet. A graduate of the École des Beaux Arts in Paris, Joguet unleashed a revolution when he returned to the family vineyards in Sazilly following his father’s death in 1957. He was, by all testimony, the first Chinonais to reduce vineyard yields substantially, bottle all his own wines, age them in year-old Bordeaux barrels, and embrace vineyard designation. His American importer, Kermit Lynch, says that Joguet lived constantly on the edge for years, experimenting incessantly and skirting bankruptcy more than once when costly experiments failed.

Joguet was also among the pioneers of viticultural techniques designed to maximize ripeness in a marginal climate—like cover cropping (cutting back the tops of the vines to allow more sun to reach the grapes), green harvesting (removing bunches of grapes to balance the load of bunches on the vine), shoot positioning, and leaf pulling, which have combined to enable later harvests of more mature fruit—and of cellar techniques intended to increase the weight and “fat” of Chinon’s reds. All over the region, producers like Bernard Baudry in Chinon acknowledge their debt to Joguet, even as they produce wines that are now as good as, or better than, his. “We used to try to make as much merely drinkable wine as possible,” says Jean-Paul Mabileau. “Now we aim much higher.”

The export market for the wines of Chinon, Bourgueil, and St-Nicolas is small, and even Parisians sometimes misunderstand them, clinging to the outmoded belief that they should be nothing more than bistro-priced “refreshment”. It’s little wonder, then, that many local vineyard properties have been sold and consolidated in recent years, leaving less land under vine now than there was when these appellations were created three-quarters of a century ago. On the other hand, there are still young vignerons here who are no less enthusiastic about their vinous patrimony than Charles Joguet was 40 years ago, and they are working to produce wines as fine as the appellation will allow. There may very well be great new things to come from Chinon, Bourgueil, and St-Nicolas-de-Bourgueil. Meanwhile, there are few better alternatives to overpriced, monster wines from the world’s warmer climates—especially if you are partial to the charms of the cabernet family—than a bottle of Baudry’s dense, elegant Les Grezeaux or Joguet’s Clos de la Dioterie, exuding leather, spice, and vanilla, with just the tiniest hint of sweet fruit.