The Chipped Plug-In Roaster That Anchors My Holidays

This vintage appliance has seen four generations through thick and thin. 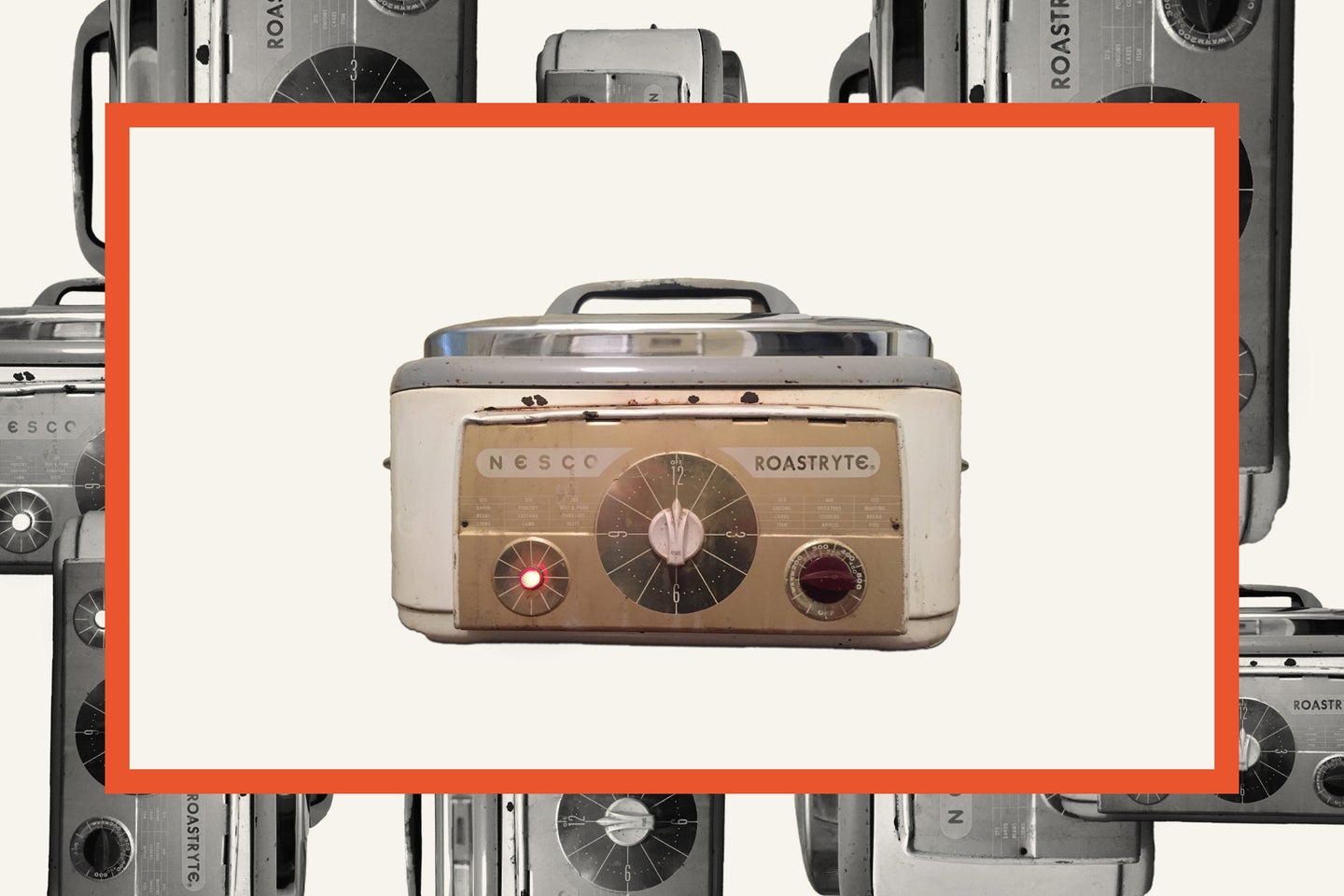 That time of year has arrived, when I haul my vintage 1940s electric roaster out of storage and crank it on for the annual holiday turkey roast. The generations of home cooks in my family who did so before me are long gone, but that old Nesco Roastryte keeps going, re-anchoring me to this season from which I’ve occasionally disconnected when loss or upheaval intervened. Each time its red light blinks on, I’m a little more grateful.

“Years and years of turkeys in that roaster,” my father-in-law Kevin Hennessy recently recalled. “I don’t think we ever had to repair it.”

The Milwaukee-based National Enameling and Stamping Company released the first iteration of its portable electric roaster oven in 1931—which was then toted around rural parts of the state by the Wisconsin Electrical Company to promote the use of electricity in homes, which until then relied on wood-burning stoves. (Today, the snappier-named Nesco makes all manner of slow cookers and pressure cookers, meat grinders and dehydrators, and a sleek line of porcelain-walled roasters that scarcely resemble those early models.)

My family’s Roastryte—a hulking, enameled-steel cooker whose manufacture date we unscientifically placed sometime in the 1940s—has endured through four generations and counting. My husband Sean’s late grandmother, a no-nonsense Irish American named Pat Hennessy, probably inherited the roaster from her mother Margaret McGuire. Pat in turn passed down the roaster to her son Kevin and his wife Betsy (my husband’s parents) when they took up the mantle of hosting Thanksgiving at their suburban Chicago home, with scarcely enough oven space for Betsy’s legendary pies. She would, therefore, balance the cooker on a card table in the den, amidst baskets heaped with her knitting supplies and stacks of Kevin’s historical-nonfiction reads that spilled over from the bookcase. Sometimes, when living-room space was scarce, the roaster was relegated to the basement—the bird’s delicious, muted aromas wafting up the rickety staircase.

The first time I laid eyes on the Roastryte, I’d brought my parents and sister over to my future in-laws’ home for our first Thanksgiving together. Sweating anxiously through my collared polyester dress, I perched on the couch opposite the roaster, its windowed lid beading with condensation while a 20-pound turkey sizzled away inside. Though the living room was furnished with reminders that this was not a place for cooking, this disembodied oven with its chipped facade industriously subverted that order. Something about that heartened me. I’d later come to associate that image with the roaster’s genially subversive then-owner Betsy, whose snowman turtleneck and sweater-vest sets belied a deceptively progressive core.

A few years later, barely three weeks after Thanksgiving in 2009, Betsy died of ovarian cancer, and Sean and I inherited the Roastryte somewhere in an unending fog of grief. We shoved it into a storage locker while trying to survive a holiday season that, for us, held only pain and loss.

In 2012 after Kevin remarried, and Sean and I bought our first place on Chicago’s northwest side, it was our turn to host a newly knitted-together family for Thanksgiving dinner, served on Betsy’s toile-patterned china. Oven space was scant, owing to my overwrought lineup of appetizers and sides, so we hauled out the Roastryte and set it on a wooden end table in the office, its edges looming precariously above the newly re-carpeted floor.

When I cracked the appliance’s lid to check the turkey’s temperature an hour later, Betsy materialized in my mind amid the rush of steam to hover approvingly over my shoulder in her favorite frilly apron. She cheerfully recounted one year when the baster misfired and sprayed the carpet instead of the turkey.

Unsure if that story was real or imagined, I felt comforted all the same, my shoulders relaxing a few inches—new carpet be damned! The cooker belonged wherever it was, roasting the centerpiece of a holiday feast. And in the end, the bird came out flawlessly—the skin golden and crackly, the meat miraculously moist. The rest of the dinner, however, flopped spectacularly. Someone didn’t like the wine; someone else had too much and decided to bring up politics. Or was it religion?

The following year, Sean and I flew to Palm Springs for a steakhouse Thanksgiving of prime rib and ice-cold martinis. For a few more seasons, the roaster lay dormant as we spent holidays away from home—skipping one Christmas, gifts and all, to fly to Austria with my sister and brother-in-law; driving up to Taos, New Mexico, another Thanksgiving to grill stuffed chickens. But inevitably, Sean and I would return from these trips with a hankering for a stuffed holiday turkey and plug in the roaster for a late-January feast. Its light would kick on to register its approval at another year of burnt turkey fat decorating its already well-seasoned interior.

On the Roastryte’s lustrous gold temperature panel is a whole host of suggested temperatures for the many dishes one might cook in the appliance: 275 degrees Fahrenheit for baked beans; 325 for poultry, custard; 375 for onions, cakes, and fish (my favorite tier); 400 for cookies and apples. Each year that we bring the roaster out, I announce that this time I will cook something other than turkey in it. But I never do.

When I asked Kevin if previous Roastryte owners ever used it for, say, a pork roast or cobbler, he replied decisively: “Roaster was used only for turkeys. It had a turkey funk in it.”

As another holiday season descends, the roaster again hibernates in a storage unit some 1,500 miles away from its longtime Chicago home, along with the rest of the life that Sean and I uprooted to Southern New Mexico this past fall. We’ll haul it out just in time for Christmas, but our new high-desert home, buried in boxes, isn’t quite up to hosting yet.

This year, it’s my sister’s turn to convene her first-ever holiday feast on the good talavera china in her yellow adobe house in Las Cruces, New Mexico. My parents will pass through en route to Tucson, and there will be stuffed turkey, of course. She’s worried there’s not enough oven space, but I’m not.