Amers, flavored with wild Alpine roots, are subtle, complex, and don't get the appreciation they deserve 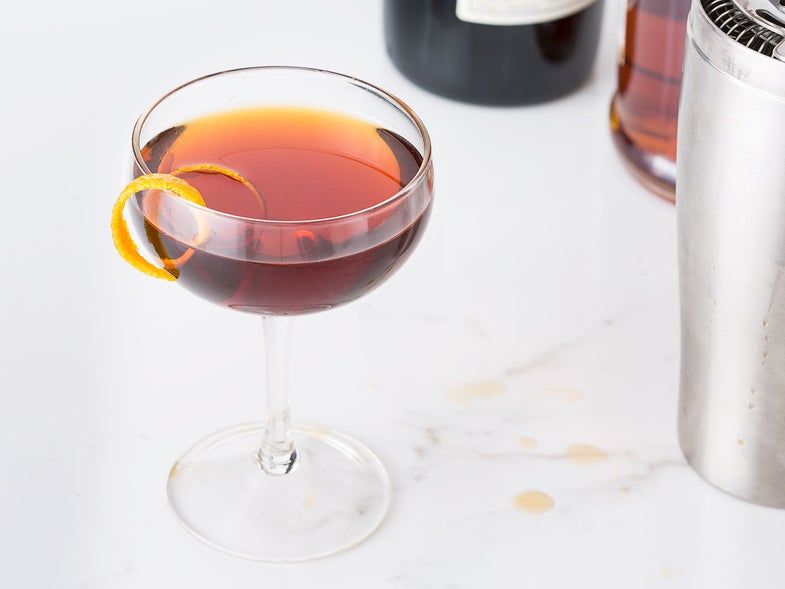 Hubert Bigallet chewed the gnarled white root of a wild gentian plant. In summer, the Alpine flower blooms in shades of deep violet or brilliant yellow. By autumn, it’s brown and spiky. Gentian, a high-altitude plant, is prized for the complexity of its bitter flavor.

There’s a long history in the Chartreuse mountains, where we are, and across the border in Italy, of distilling aperitifs and digestifs from medicinal mountain shrubs and roots. Gentian is the chief bittering agent for a wide swath of liquors: Campari and Cynar, and most amari made on the Italian side of the Alps, and French aperitifs, including Salers, Suze, and Amer Picon.

While northern Italian aperitif spritzes, laced with amaro, and various punishingly herbaceous digestifs get global attention these days, French versions are still somewhat obscure. France was once home to plenty more small distilleries, many crowded around the mountains and their potent plants, but their numbers have dwindled over the years, and some of these bottles are rarely drunk, or even known, outside the regions where they are made.

Hubert’s grandfather Félix Bigallet founded the family-run distillery in 1872. Today Bigallet produces a wide range of both syrups and liqueurs, including a thyme digestif, a Chartreuse-like elixir made with dozens of botanicals, and a gentian-scented liqueur called, somewhat mysteriously, China-China amer.

Amer (literally: “bitter”) is the French equivalent of Italian amaro. If you’ve ever had a Fernet-style amaro, China-China (pronounced SHEEna-SHEEna) seems surprisingly tame. It doesn’t have the punch-to-the-throat bitterness that some of the Italian amari have; it’s considered doux-amer, bittersweet. Made with sweet and bitter orange, clove, caramel, anise, and gentian, it’s both citrusy and earthy, herbaceous and a touch sweet. It is so delicious it seems silly that it’s little known outside Rhône-Alpes.

Before our walk up into the Chartreuse mountains, I had lunch with the Bigallet communications manager, Isabelle Perrin, at the charmingly fusty Hôtel des Bains, in the town of Charavines. Over frogs’ legs, a gratin of ravioli pocketed with cooked cream, and a lovely flan made with China-China amer, she recounted the mythology of the drink.

“A pharmacist friend of Félix Bigallet was experimenting with a gentian-orange liquor,” she told me. “One day, he went to go flirt with a worker named China, leaving his concoction as it was heating up. Smelling something burning, he realized it was his liquor and yelled ‘Oh, China China!’ He was sure it was ruined. But the sugars had caramelized with the orange—and it turned out to be delicious. We don’t know if it is true, but that is the legend.”

“Is China a common French name?” I asked.

“Ah, no,” said Isabelle, laughing and shaking her head.

As a child, Hubert helped clean gentian root with a brush and some water, cutting out brown spots with the tip of a knife, as you would a potato. He trained the current distiller, Olivier Giffard, husband of Hubert’s niece, Marie. The Bigallet production facilities feel more like Willy Wonka’s factory than a prototypical cold, damp, and somewhat depressing distillery. The workers there are dressed in blue pants and purple sweatshirts. And the plant even smells like candy. In the back, hydraulic pumps wheeze and click, capping bottles of syrups. A large vintage poster for Amer Citronné dominates one hallway. The image shows a woman dressed in a pale yellow dress, its fabric forming the shape of overlapping lemons. The product has long been out of existence, but Olivier has been experimenting with a new version in his lab. He shows me a recipe for the original from an old, yellowing book with graceful looping handwriting in ink. He promises to share a sample of the work in progress.

That evening, I joined Olivier and Marie for dinner at their home, along with two of their children, and Marie’s parents, Emmanuel and Arlette. Emmanuel, a rotund man with a gray mustache and wide smile, bounded inside, wielding a wooden mallet for smashing ice to chill the champagne and doling out kisses to his grandchildren, Lea and Piettrick. While we sipped champagne around a blazing fire, I asked Marie how she and Olivier met. They both belonged to a mountain club at their university in Lyon, she told me, and for their first date, Olivier invited her to go climbing in the dead of December.

“He invited me to test me,” said Marie. “In the mountain, you cannot hide your true self. I was so cold but so happy.”

After a simple dinner of velvety pumpkin soup, fat sausages with fennel, and tender scalloped potatoes, Olivier poured a round of the resurrected Amer Citronné into small cordial glasses.

We sniffed: fragrant lemon peel, the earthiness of a freshly cut root.

“Long live the house of Bigallet,” bellowed Emmanuel as we tasted it.

Here was a drink that shared some common DNA with limoncello—but with none of the Italian liqueur’s syrupy sweetness. This was bright, fresh, and lively, thanks to the presence of the crisp, bitter gentian root. A drink with a past—and maybe a future.

Get the recipe for the China Fight cocktail »