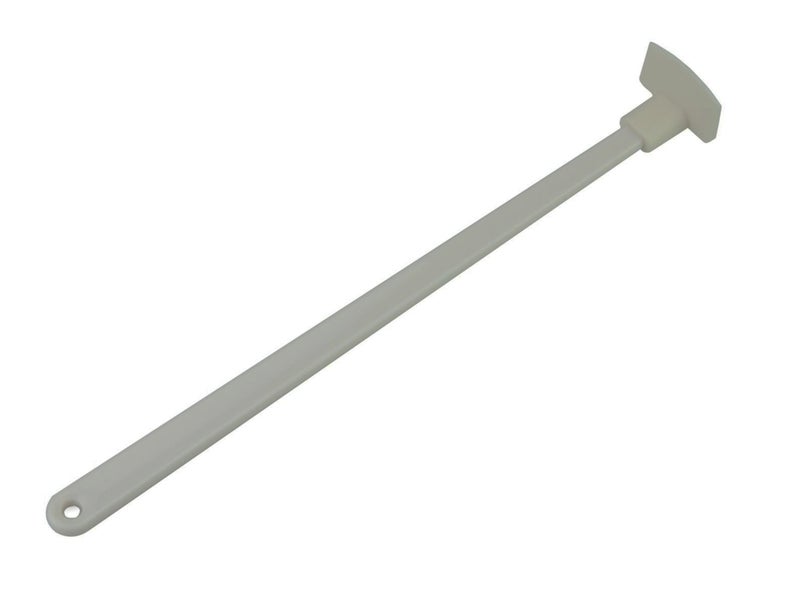 You know how there’s always that last bit at the bottom of the mayonnaise jar that’s just out of reach? Thanks to a handy tool called the flessenlikker, the Dutch don’t have that problem.

Literally ‘bottle-licker,’ this elongated spatula does exactly what it says: licks up every last smidgen of soft, creamy condiments from the inside of the bottle, such as yogurt, peanut butter, ketchup, or jam. In the Netherlands, it’s used primarily for vla, a thin, custard-like dessert. According to Dutch food historian Peter G. Rose, vla is the standard end to the evening meal. Back in the early 1900s, it was sold in glass bottles. “And when you got to the bottom of the bottle, you wanted every last drop,” Rose notes.

Enter the flessenlikker. Its flexible head fits perfectly inside the two-inch opening at the top of the bottle (and, conveniently, other condiment bottles) while a long wand lets you reach all the way to the bottom without getting your hands dirty. Rounded on one edge and square on the other, it’s equally at home in cylindrical bottles or the rectangular cartons that vla comes packaged in today.

The handy spatula is actually a Norwegian invention, though it never took off in its country of origin. But it’s become a staple of frugal Dutch kitchens, and it doesn’t cost much to add to yours. A silicone flessenlikker (they also come in rubber and plastic) runs less than $5.*

Just beware of versions that include a steel insert in the business end. Colin White and Laurie Boucke, authors of The UnDutchables: An Observation of the Netherlands, Its Culture and Its Inhabitants, warn that it will rust “after a few furious bottle scrapings.”

According to the section of their book dedicated to the flessenlikker, brown streaks in your mayonnaise is “a sure sign that your host has not spent his/her flessenlikker-€uros wisely.”

Tiffany R. Jansen is a freelance writer with a hot dog in one hand and a stroopwafel in other. She’s written about wellness and lifestyle for TheAtlantic.com, SELF.com, and Pregnancy & Newborn.

(Update: Kitchenworks and other American flessenlikker outlets are currently experiencing a spatula shortage; here’s a similar product the store stocks in the meantime.)