Give a Jar of No-Knead Sourdough for Others To Feed

For Kevin Pang, the holidays are full of feeding a loaf of bread to watch it grow 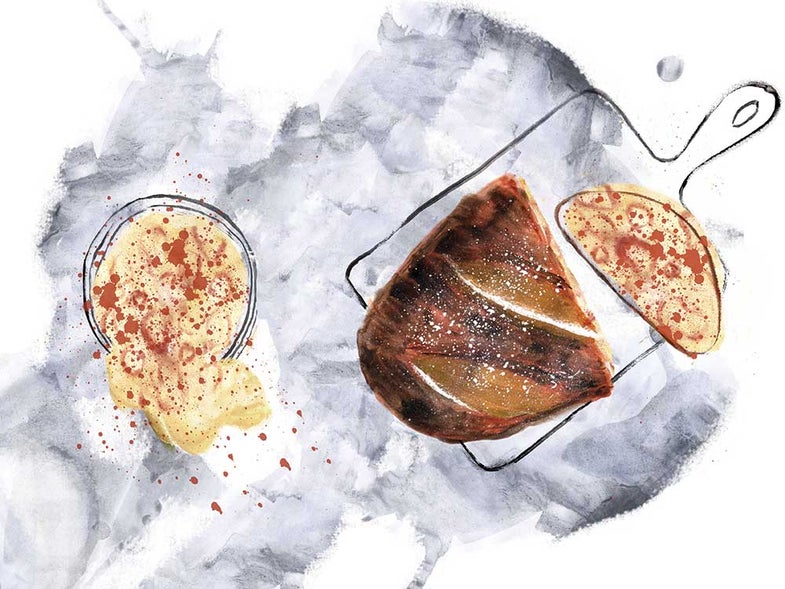 The worst present I ever received was a goldfish, when I was 10. I don’t think I even gave it a name. I’d never before had the responsibility of keeping anything alive, but my parents thought a 1-inch fish was a no-fail starter project. On day two, I sprinkled five times the food recommended—I picked that move up from dinners at my grandma’s—and on day three, we bid the goldfish farewell.

After that, I never entertained the thought of owning a pet, or really anything that grows at all. So when my wife announced she was pregnant two years ago, my reaction was to stand frozen in mortal fear. But fatherhood arrived, ready or not, and the responsibilities came fast and furious. So far, so good.

Of the many ways fatherhood has changed me, the most enjoyable has been my transformation into a total homebody. And no hobby illustrates la vie indoors more than my newfound obsession with baking bread. I now own every book there is to read on the subject, and many Saturday nights have been spent studying dough-folding and boule-scoring. Here’s the thing: I like bread more than I love bread. I taste a few slices of what I bake and jot down notes in my bread journal, and the rest gets turned into croutons. How did I fall for baking so hard? I tried retracing my steps. Is it the microbiology? The primordial novelty of cooking a food made 25,000 years ago? No explanation fully satisfied until I birthed my own sourdough starter.

As it has been for so many new bread­makers, Jim Lahey’s no-knead method was the gateway drug. That four ingredients and 20 hours could yield such a crusty, pillowy, wondrous loaf at home felt like some kind of spell. Using Lahey’s recipe as my baseline, the next step was to tackle sourdough. Here was Mother Nature at her most beautiful and giving: With a mixture of water and flour kept in a properly warm setting, enough naturally occurring yeast—in the flour, on our fingertips, floating in the air—would propagate, leavening the dough on its way to becoming bread.

For the first few weeks, it felt like an exercise in futility. I measured out flour and water to the gram, feeding it at the same time before bedtime. I’d excitedly check in the morning to see if science had worked. All it did was produce a few flat bubbles and remain a lifeless, wet pile of dough. At the end of the second week, I threw my jar of failure in the fridge and picked up a book on pickling.

Then: the miracle of life. While rearranging the contents of my fridge a few days later, I took the jar out and forgot about it on the counter. When I returned several hours later, the soggy mixture had transformed, blooming and crawling halfway up the jar! The mixture smelled like beer and stretched like melted mozzarella. I fed it again that night and the next morning, wonder of wonders, the sourdough starter came alive, doubling in size. What the bread gods were trying to tell me was be patient. Listen to what it needs. Give it love and care. Now, feeding this living dough and making bread with it has become part of my daily routine. I feed it to my son, who calls it “daddy bread.” It’s the most gratifyingly caveman thing I do.

This will be the year I stop buying gift cards for friends. Instead, I will package my sourdough starter in a jar and attach explicit instructions on how to care for it. It will be the cheapest but most meaningful present I can ever give. For some, to have such great responsibility foisted upon them will be as terrible a gift as a goldfish to a 10-year-old. They may humor the process for a few days before dumping it in the trash. And I’d be fine with that. I just need one person to buy in so the lineage continues. Because what is discarded wet dough for some is a living, breathing wonder for others. I hope they see it as I do: That I’m sending this small clump of life into the world.

Get the recipe for Sourdough Starter »