Sardines suffer from the same bad reputation as Brussels sprouts once did, the result of poor quality and preparations that repulsed entire generations. But if anyone still thinks of sardines as the smelly, fishy abominations grandpa ate from the tin (or of Brussels sporuts as slimy, boiled atrocities) there are many far better products on the market these days to change their minds. Salty, rich, versatile, and easy, the best canned sardines make a satisfying snack, fill a fantastic sandwich, and amp up the flavor in recipes (see some of SAVEUR's favorites here).

That’s the good news. The bad news, as we learned in our tasting, is that those stinkers you might remember from childhood still exist: there weren't many, but we definitely opened a few cans that gave off the kind of fishiness that only appealed to the neighborhood cats.

Why is the risk of fishiness so high? Sardines are oily fish, explains Jim Dixon of Wellspent Market, so they don't store well fresh and go rancid fast if they aren't processed quickly—which is why canning them became so popular. The quicker they are cleaned and steamed for canning, the less chance of the oil in the fish breaking down, and the better the final product.

The best canned sardines keep basically forever, cost very little for the amount of protein packed into them, and supply a ton of nutrients, including omega-3 fatty acids, B12, and calcium, making them a very worthy pantry staple. Still, the top arguments for canned sardines come from their flavor. "The cheap ones use crappy olive oil," Dixon points out. But the great ones use high-quality oil that really adds to the allure.

The easiest way to eat more sardines, of course, is to find the ones that taste best. It's been eight years since we last rounded up our fishy favorites, and we found many more brands to add to our list of salty, oily, fantastic fish. 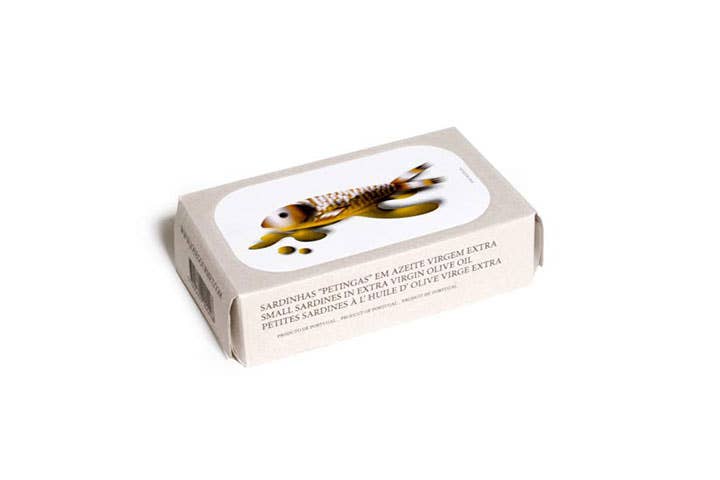 Why we chose it: These small fish pack a big, quintessential sardine flavor with a firm but forgiving texture.

These sardines will make you forget any memory of fishy or off flavors from poor quality versions: they taste rich and salty, like just the kind of the little seafood snack you want to stack on a cracker. The high quality of the olive oil in which they were canned rings through in every bite, and the texture of the fish just holds together without being too firm to enjoy. With the classic sardine flavor and a salty pop, they work as well in recipes as they do on their own. For a fun twist, the smoked version also tastes great with even more snackability. 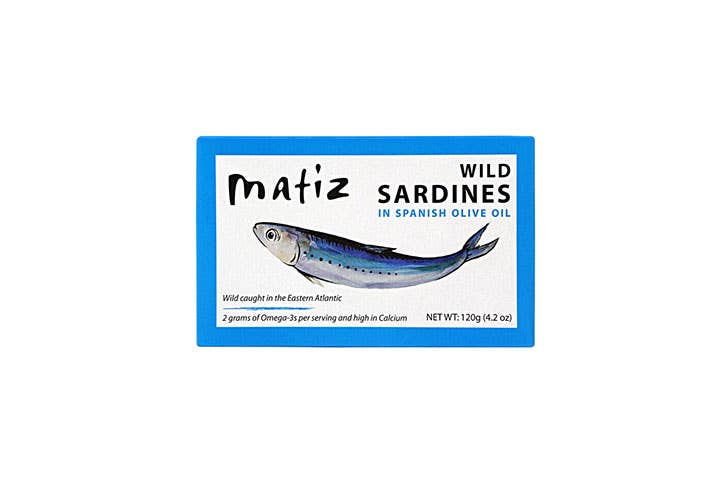 Why we chose it: Even though Matiz's sardines sit one rung down the price scale from the fancy fish, they are one step up in quality from the basic brands.

Matiz is one of the most widely available brands of sardines, and for good reason: the big, meaty fish had a nice color and a clean, salty flavor. Notably, they don't mention using extra virgin olive oil, and the lack of good oil flavor shows in the final product. Still, at a significantly cheaper price than the craft brands, these deliver just the sardine flavor you expect for most uses, beyond just eating straight from the can, 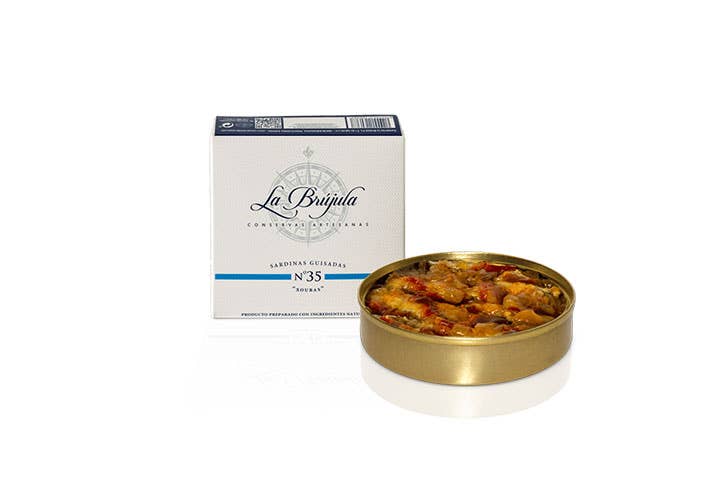 Why we chose it: These fried and sauced fish require nothing more than a crack of the can and a little fork to be an elegant, delicious snack.

These are some fancy fish: the big round can and clean modern design of the box scream it before you even open it. But the flavor held inside is what really makes these spendy sardines worth springing for: tiny, briny, lightly fried and then left to soak up a sauce of sautéed peppers and onions that taste like someone made them to order, rather than sealed them up half a world away. The rich, savory piperade and flavorful fish make this a phenomenal snack, which looks great even straight from the can and simply scooped onto a cracker. 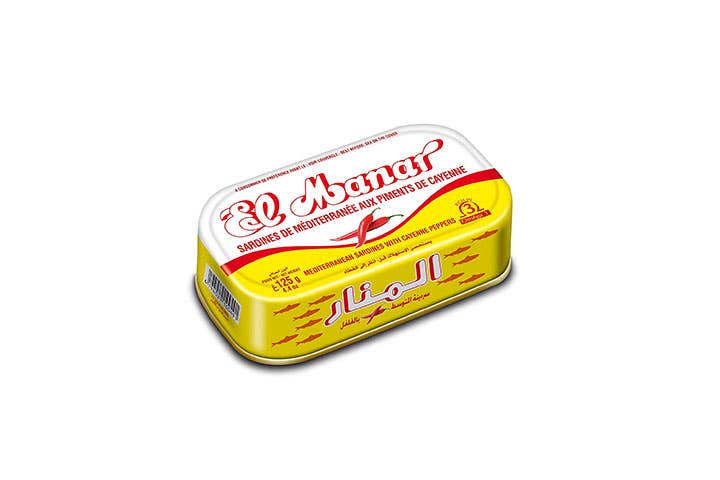 Why we chose it: A cute can and a fiery heat make these sardines a cravable treat.

The brightly colored retro tins from this Tunisian producer look great rolled open, which makes them a nice addition to an appetizer platter. While their plain version was a little bland, these spicy ones bring a potent heat that more than makes up for the slight mushiness in the texture of the fish. 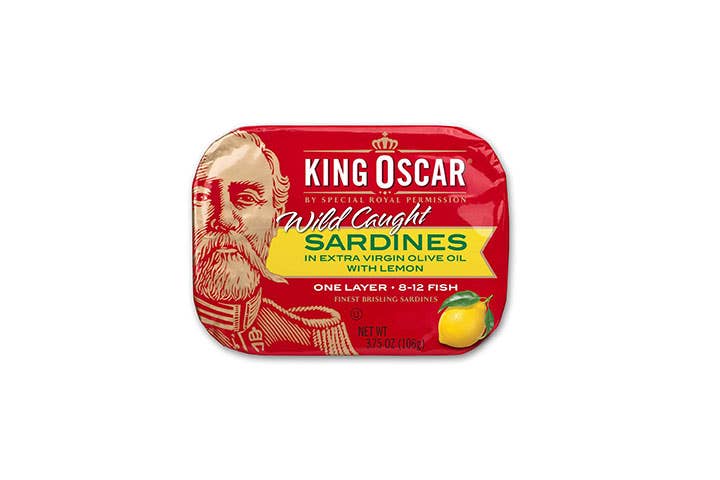 Why we chose it: This classic brand and strong budget option shines with the added brightness of citrus.

Most of the King Oscar packs we tasted were exactly the kind of thing that gave sardines that poor reputation, with fishy smells and off-putting flavors, so much so that we almost didn't even bother to open the lemon version. It seemed that the low price of the grocery store classic was for good reason—but thankfully the intrepid tasters did try it, because this was where King Oscar shone. The fish retained a nice, meaty texture and lemony brightness sang throughout the bites, effectively masking any issues we might have detected in the brand's other products. Because true citrus interferes with the preservation, this is made with lemon flavoring, which did give it a bit of that "Pledge" odor of cleaning product, but very little when compared to other similar products.

Each of the fish we tasted was sourced by our market editor, who researched the category with eyes on quality, price point, and flavor. We aimed to taste as many brands as possible from budget grocery store versions to super high-end imports, and tasted through a range of their products. One of our experts, Bryan Jarr, participated in our tasting and helped to sort the best of the products and identify what made them superior.

Features to Keep in Mind When Shopping for Canned Sardines

Most of the best canned sardines come in oil, specifically olive oil, and occasionally in a sauce. While there are some canned sardines that are packed in water, they’re more typically packed in oil since the fish itself is naturally oily and most of its uses—like snacking—require oil. Beyond what they are canned in, some may have been cooked prior to the canning process for added flavor: smoked, fried, or steamed. All sardines come cleaned and with their heads removed; some will still have bones while others are packed boneless.

Since the majority of canned sardines come in olive oil, much of their flavor relies on the quality of the olive oil. However, there are some common flavorings, including in oil with peppers, in tomato sauce, and in oil with lemon. Other varieties get lightly smoked or come in a mustard sauce. One thing to watch for in these flavorings is that many flavorings that could spoil over time, like lemon, are actually added via an extract or flavor compound so the sardines don't deteriorate before they're eaten.

The name sardine can actually refer to more than a dozen different fish, which leaves a lot of room for size variation. Some tins will label specifically that they use small or bristling (a small variety) of sardines, while others brag about the fleshy pilchards, but most simply don't specify, you will need to open the can to find out. There is no quality difference represented in the various sizes, though some people prefer the look of a larger fish or the texture of the smaller ones.

Each can of sardines comes labeled as to which country it is a "product of," however, that refers to where the canning happened, not to where they were fished. Some products will also label where the sardines themselves came from, but since sardines move around, Jarr says that it doesn't really matter too much.

Q: Which country has the best canned sardines?

As with so many migratory fish, Jarr notes that sardines do a run, so the same fish are all over. That said, the quality of olive oil used in canning matters, so he likes a lot of Spanish and Portuguese brands. Dixon also points to good products coming out of Scandinavia, though he calls them "more industrial," and "not as big and meaty."

Q: Are sardines better packed in water or oil?

Neither Dixon nor Jarr see any reason to buy sardines packed in water, as the oil balances out some of the stronger flavors of the fish. "[Oil] gives a different dimension to the actual fish," explains Jarr. "Everything you're going to do with sardines uses oil," he adds, so having them preserved in it starts one step ahead.

Q: Should you rinse canned sardines?

"I would never," says Dixon. "All the stuff that's in there, that's where all the flavor is!"

"Maybe indefinitely," guesses Dixon, and Jarr agrees, saying they pretty much last forever, and even noting that some they can get even better with age when canned in good olive oil.

It’s true that some types of sardines have been overfished, but that’s not necessarily because we’re canning too many of them. "It's not because people are eating too many sardines across the world," explains Bryan Jarr, the owner of Seattle's tinned fish and cocktails spot, Jarr Bar. "It's because too many are caught and then given to the fish farms [as feed] so that we can have other fish." In other words, the only overfishing of sardines comes from demand for eating other fish, like tuna—and if people just ate more sardines and fewer larger fish, both populations would be better for it.

It's time for sardines to shake their reputation as that cheap, stinky, fishy stuff that grandpa ate—a shift that's been happening slowly over the last decade, but deserves to happen at warp speed now that there are so many incredible brands available in the U.S. The import market is heating up, from spicy Tunisian tins to brilliantly flavorful small sardines in olive oil, and bringing in top quality sardines all over the price spectrum, in various sizes, and with all kinds of flavors. There's never been a better time to set out the crackers and start tasting to find your own personal favorite.