We often think of summer as the high season for homemade ice cream, but really, would anyone ever turn down a scoop (or two)? Frozen desserts have been around for centuries, and once old-school hand-cranked churns gave way to more compact countertop versions, which skip the potential inconveniences of ice and rock salt, it’s been pretty simple to make ice cream—and frozen yogurt, gelato, and sorbets—in small batches right at home.

If you think you’re not brave enough to try making your own ice cream, listen to the wisdom of author and ice cream expert Max Falkowitz. “The truth is that making ice cream is really easy,” he says. While he admits that figuring out which machine to buy can be a big psychological hurdle, once you add yours to your countertop, it’ll be just like a microwave or toaster oven. In other words, you’ll use it. A lot.

Can a home ice cream maker achieve the same quality and flavor you find at exclusive scoop shops? Without a doubt. And making your own ice cream is also fun, says Jessie Scarola, owner of Vanilla Jill’s ice cream and Elegant Elephant Fine Foods in Eugene, Oregon. “Home ice cream making is just so much more forgiving than commercial production,” she adds. “It’s easy to make at home, and you know, homemade is always best.”

Falkowitz agrees: “Most home ice cream recipes are pretty foolproof,” he says since you get to control what goes in and what doesn’t. Once you’ve made a few batches, you’ll get a feel for it, and then you can start messing around with flavors and add-ins. If you make a few mistakes as you perfect your technique, no matter, he adds: “Even bad ice cream is better than most other things.”

A Few Things to Keep in Mind

All of the ice cream machines we discuss here are designed to look good on the countertop. You’ll find classic white models and stainless finishes, plus fun, bold colors to match your kitchen décor.

Ice cream needs to be frozen somehow, and thus all countertop ice cream makers rely on either old-fashioned added ice, a freezer bowl, or a self-contained freezer. Self-contained ice cream makers with their own compressors are certainly an option, but they come with a hefty price tag, so they may not be a beginner’s first option.

If novelty and fun are important—or you’re looking for a device to use with kids—a soft-serve ice cream maker might be just what you’re looking for, emulating the commercial experience right down to the mix-ins. 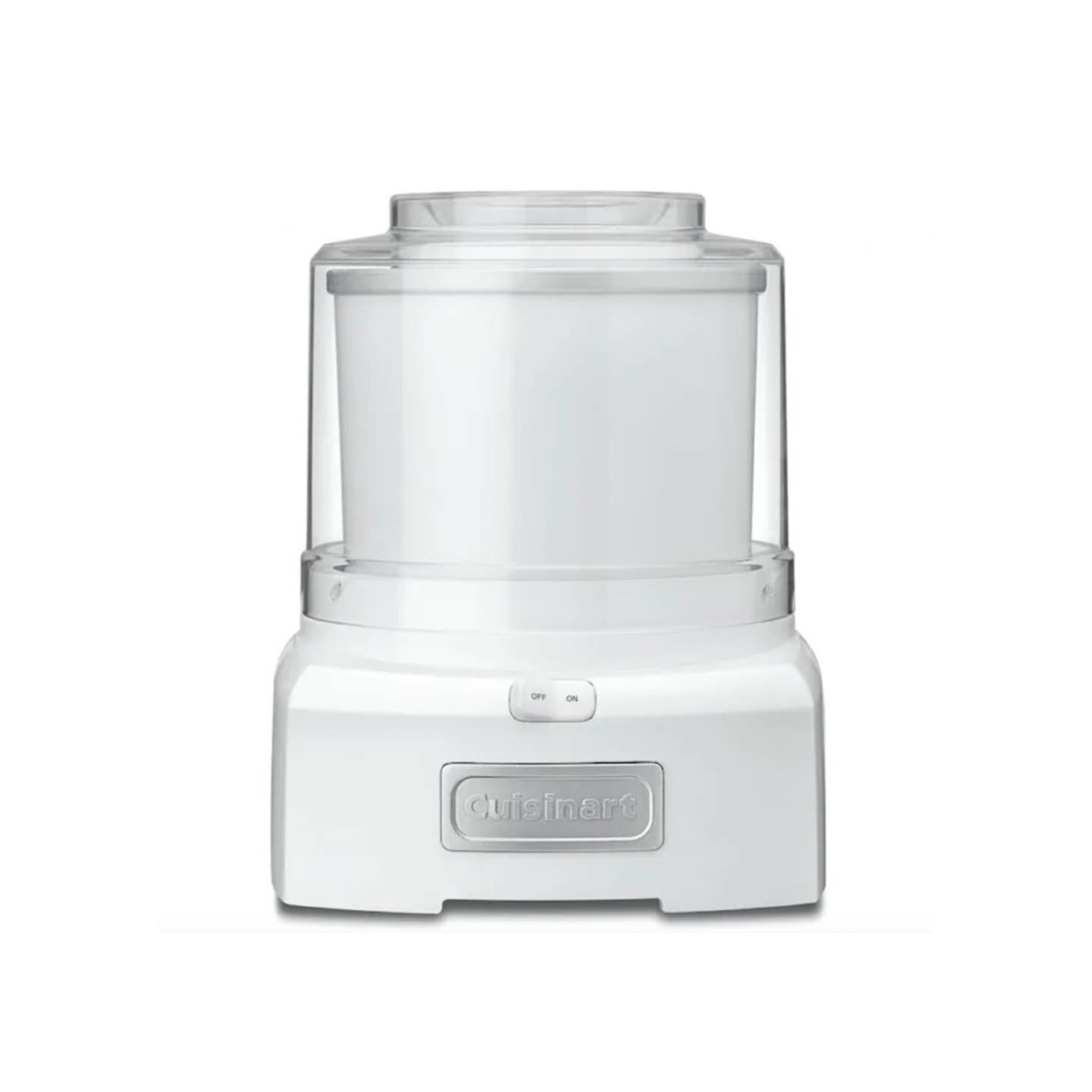 This takes the top slot in both categories, thanks to Cuisinart’s quality and thoughtful design. Almost everyone who uses it loves it, and the price is reasonable. This machine, which relies on a freezer bowl, is a Falkowitz favorite for many reasons, including its simplicity. “There’s like, one moving part,” he says, “and very little that can break.” Plus, the design offers easy access at the top of the bowl, which is crucial once the churn has done its work. “You’re in a race against time when the ice cream is finished turning,” says Falkowitz, “because it’s going to start melting really fast while you’re trying to get it into the container.” Get past the minimal inconvenience of having to freeze the bowl in advance by keeping the bowl frozen all the time, or at least being sure to pop it in the freezer the night before you plan on making a batch. With that little bit of planning and about 20 minutes on the counter, you’ll be rewarded with a homemade quart of ice cream to share. Gift-wrap this Cuisinart with a good ice cream recipe book and it’s a best-bet present for the novice—practically foolproof.

Best For A KitchenAid Mixer 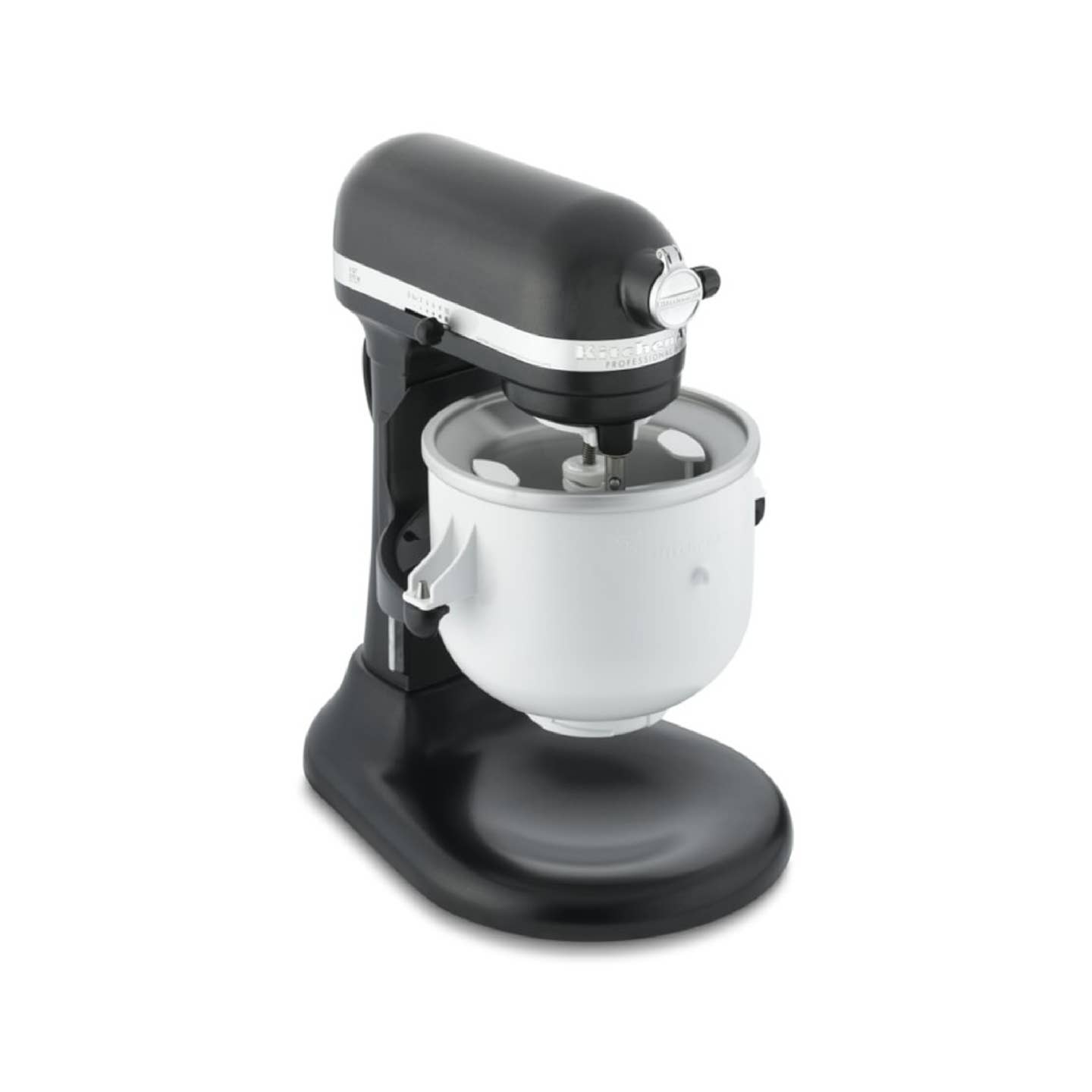 If you already own a KitchenAid mixer and want to start experimenting with homemade ice cream without adding to your countertop appliance array, this special freezer bowl is a great acquisition. This is the machine that Scarola started on at home before she took on commercial batches at Vanilla Jill’s. Freeze the bowl overnight, attach it to the mixer, start at a slow churn, add your ice cream base, and in less than half an hour, you’ll have two quarts of homemade ice cream. Assembly can be tricky for some: As with many KitchenAid accessories and the strength of the mixer’s motor, you have to be certain everything is put together correctly before turning it on. You’ll also want to plan how to add your ice cream base as the bowl is moving, pouring around the mixer head, but if you’re attuned to the way your KitchenAid works that will come naturally. 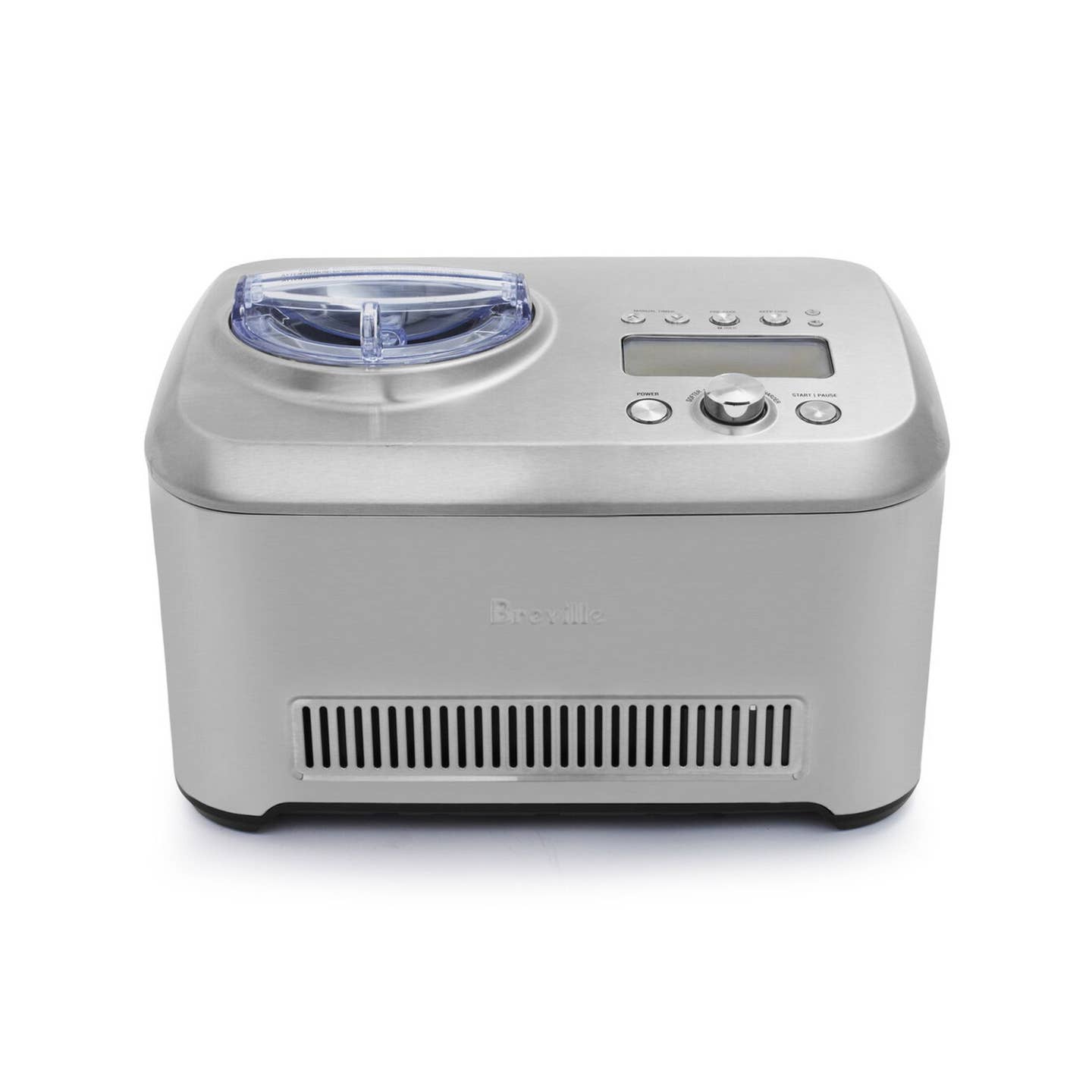 If you want something that’s self-contained—no freezer bowl required—and are willing to spring for the extra expense of a countertop ice cream freezer, this Breville choice offers the best features, including controlled temperature that allows the user to decide how hard the finished ice cream will be. It’s not the thriftiest option, and it does have a larger countertop footprint, but this maker allows for more impromptu desserts. Just be certain to use a reliable ice cream recipe and follow Breville’s instructions. 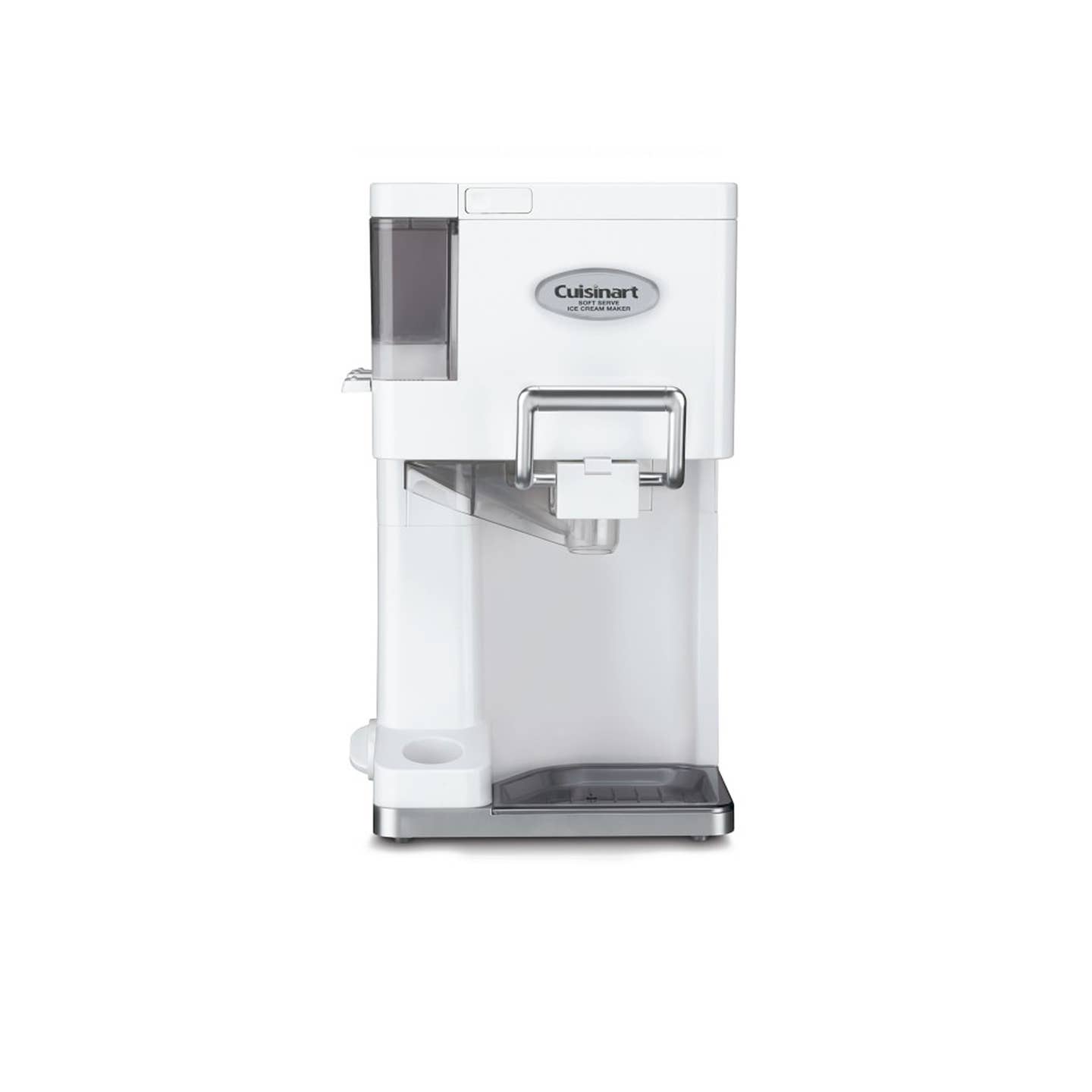 Cuisinart’s novel soft-serve ice cream maker requires a bit less planning, as the ice cream you’re making in its freezer bowl is meant to be eaten fresh out of the machine. In other words, it’s not cured before serving, so you’re not battling with the one element Falkowitz notes is so often overlooked in ice cream making: speed from churn to pint. As a bonus, it also allows you to add mix-ins as you serve. Fun. 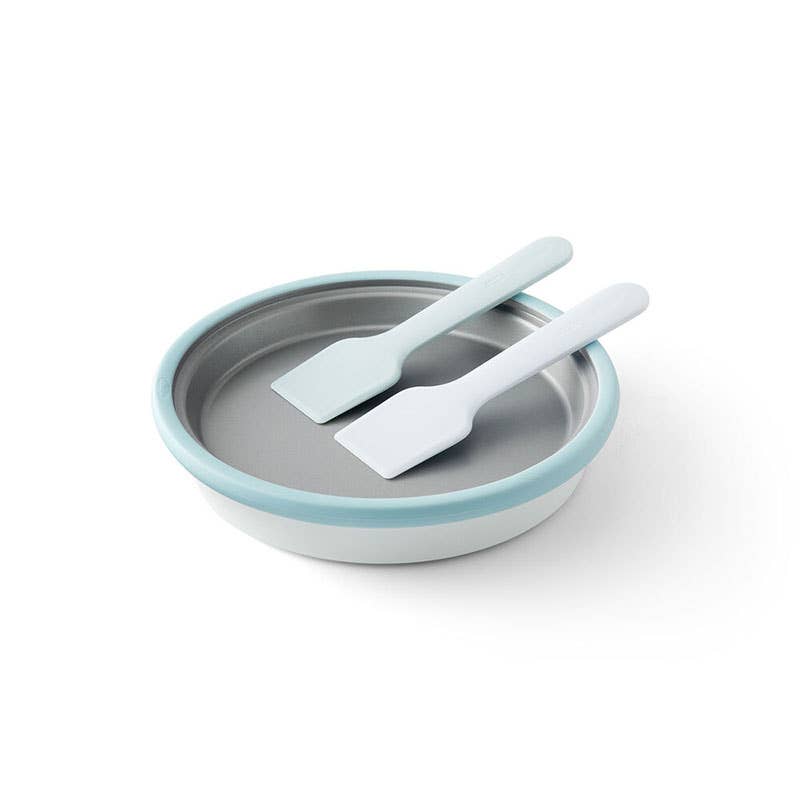 This ice cream maker operates on the same principle as rolled ice cream, which has its roots in Asian and Middle Eastern cultures—no electric churning required. It makes just a few servings, but it does so almost instantly. Spread your ice cream base out over the pre-frozen surface, scrape it up in rolls, and voila! Just remember that you still have to work from a recipe with the right proportions of fat, sugar, and flavor, because that’s what makes ice cream so creamy and soft.

How long does it take to make ice cream in an ice cream maker?

Whether you opt for a self-contained machine with its own compressor or one that relies on a freezer bowl, an irresistible batch of homemade ice cream can be churned up in about 20 to 30 minutes. A soft-serve machine is quicker on the counter, but that’s for instant eating. In almost all cases, you’ll want to be sure you start with a good recipe that uses the right proportions and have your base mixed, melded, chilled, and ready to go before you start. Do you have to chill it overnight? That’s up for debate, says Falkowitz, who adds that while overnight chilling “is not strictly necessary, it just does something to the flavor.”

Prep is important when making homemade ice cream, but don’t let that scare you off. It’s no more trouble than chilling a pie crust before rolling it out. Scarola likens freezing the work bowl to the process of making whipped cream: “You want it to whip up quicker, right, so you chill the bowl and mixers first.” Same with the ice cream maker bowl: Just freeze it in advance.

The bottom line is that homemade ice cream is well worth the effort, and certainly not the Olympic undertaking you might think. “Really,” says Falkowitz, “if you can make box brownie mix, you can make ice cream.” Grab your spoon and your sprinkles — it’s time to get started.