In American cuisine, pepper gets something of the short shrift. It’s most often thought of as the duller half of a couple with salt, or pre-ground to dust and left devoid of flavor on a restaurant table. But with the recent trend towards careful spice sourcing and an understanding of the importance of grinding fresh, the spicy, zesty, herbaceous, and floral notes of peppercorns emerge in kitchens and on tables around the country.

After growing up with what he calls "the shadow of the pepper flavor" from shakers, Jim Dixon of Wellspent Market says now he looks for ways to make sure he can actually taste the flavor of pepper. The best peppercorns bring big, exciting heat and intriguing sharpness to the front of dishes from all over the world.

"I love how it kind of alchemizes when you dry toast it," says Melissa Aaron of spice shop The Kitchen Imp. "It transforms from a background flavor enhancer and puts on its party dress. It becomes simultaneously sweeter and spicier."

But even before cooking, the peppercorn's flavor depends on how it was harvested and processed. The most common black pepper is the dried, unripe fruit—a drupe—that grows on a vine (Piper nigrum), and tends to offer a complex spiciness. But there are also white, red, and green peppercorns from the same plant—If you ever happen on fresh green peppercorns, you can also brine and preserve them yourself. Then there are other pepper-adjacent and similar plants which often get lumped in with the single fruit that produces peppercorns, like Sichuan peppercorns.

The final key to the flavor of peppercorns comes in how you crack them. The best pepper mills let you easily and precisely adjust the size of the grind, though Dixon often prefers the tactile feel of crushing them in a mortar and pestle.

This might mean forgoing the fancy matching shakers on the dining room table, but pepper's long ties to salt has done it more harm than good. "Salt enhances flavor," Dixon points out, "But pepper is a flavor." We tasted through dozens of varieties and brands of peppers to find the best peppercorns and how they epitomized that coveted flavor. 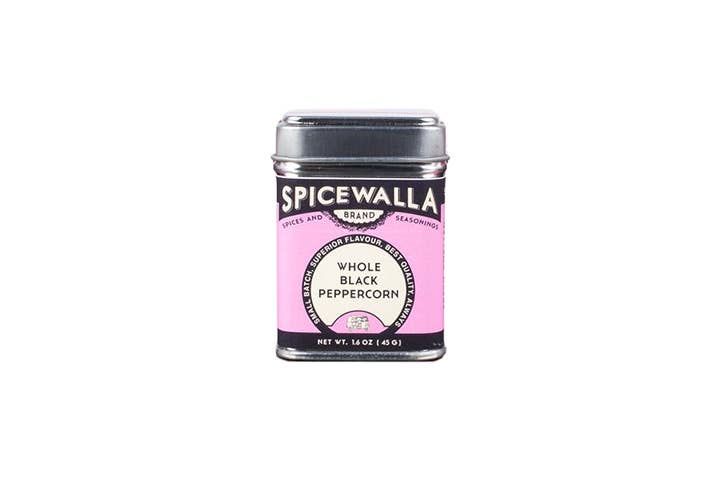 Why we chose it: The medium heat builds over time, and combines with a complex flavor that pairs well with most foods, making it a good all-purpose peppercorn.

For everyday pepper usage that still brings the kind of complex, fascinating flavor as pricier peppercorns, this generically labeled black peppercorn deserves the coveted tabletop grinder spot. It fits as well with the floral acidity of cottage cheese as it does in the role of spicy seasoning on a steak. It carries some heat, but the slow build makes it more universally palatable. 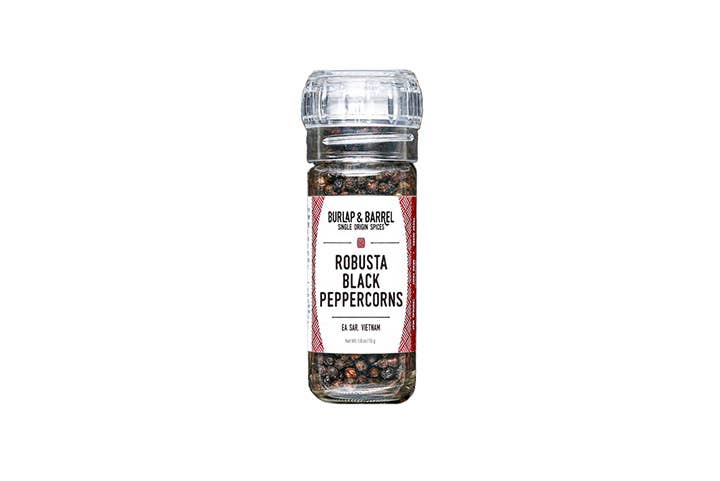 Why we chose it: The spice comes strong and consistent in this Vietnamese black peppercorn grown among Vietnamese coffee trees.

Most spice lovers reach for the hot sauce or red pepper flakes, but this black peppercorn carries enough oomph to up the heat without the fruitiness of flakes or liquid of a sauce. The spice comes on fast and strong, which hides any complexity it might have, leaving an otherwise generic classic black pepper taste. The built-in pepper grinder it comes in seems ideal at first, since it makes it always ready at hand, but the grind seems a little too fine for the pepper and it is difficult both to open initially and to remove peppercorns for other grinding methods. 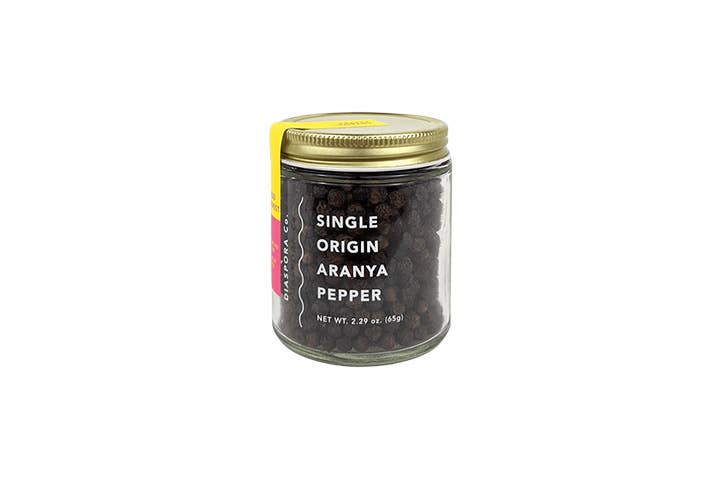 Why we chose it: Fall in love at first smell with the warm spices and dried fruit aroma floating up from this jar.

Though it lacks the zingy heat of other peppers, the intensely beautiful smell and flavor of these single-origin peppers more than makes up for it. The jar immediately disseminates a figgy sweetness and warm spices, akin to a glass of mulled holiday wine, and unlike many peppercorns, those translate to a fascinatingly complex flavor as well. The heat builds a little bit through the bite, but never gets above mild, making it a great choice for people who want a top pepper without heavy spice, or for uses where too much spice would interfere with the dish. 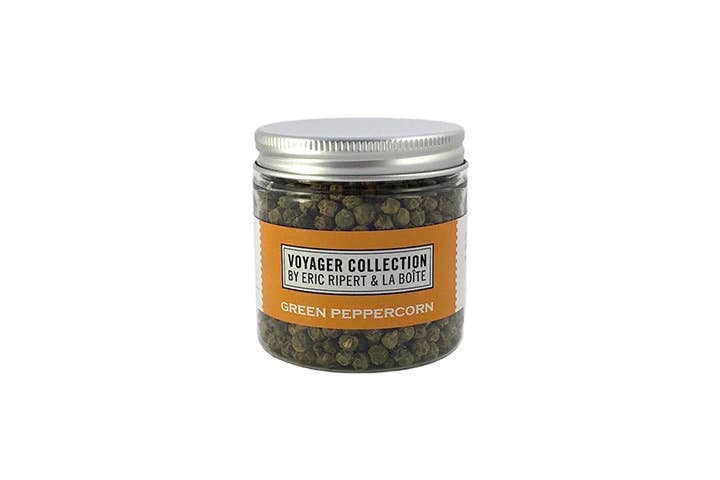 Why we chose it: These embody the bright, herbaceous flavor of green peppercorn.

The unripe nature of green peppercorns packs a big, bright flavor with a defanged version of spice. Zesty and fresh tasting, these air-dried peppercorns gave off all the desired flavors, the only downside came with the inconsistent color: dull yellow and brown peppercorns mixed in with the pretty pistachio spheres. 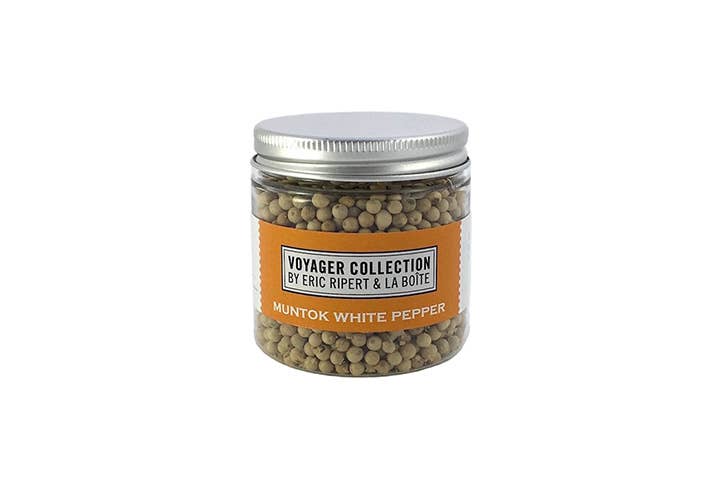 Why we chose it: While most white peppercorns easily achieve the funky traditional fermented flavors, this unique offering tones down the funk, letting through subtler flavors.

While Muntok is generally considered less desirable than Sarawak white pepper, this product's milder levels of fermentation allowed the subtler creamy flavors to shine through. The flavor starts with a brightness rare in white pepper, then takes a little while to build, eventually blossoming into the signature funk of white pepper, bringing a zingy spice at the end. 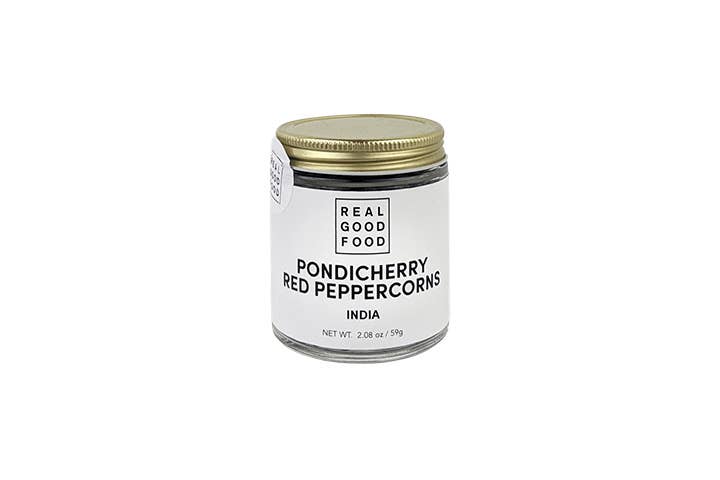 Why we chose it: The intriguing sweetness and medium heat of these red peppercorns brings a mature, jammy flavor to foods.

The dried fruit flavor of these red peppercorns gives the jar the exact same scent as a whiff of a new box of raisins in your lunchbox. But unlike raisins, underneath the mature, warm, sweetness, these harbor a delightful complexity with just a gentle burn of spice. 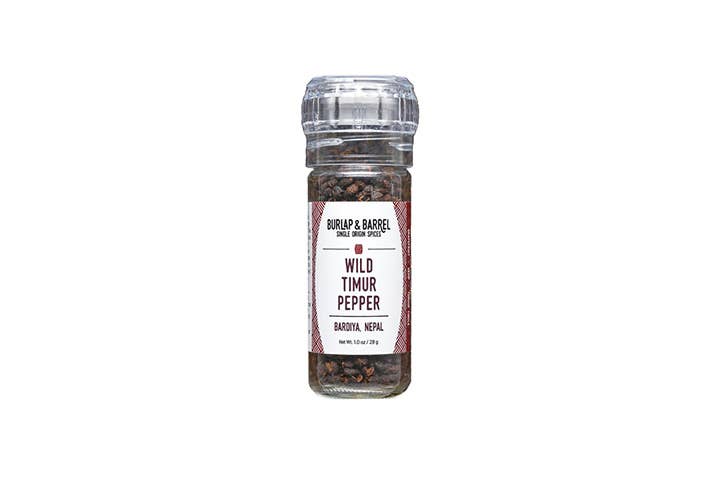 Why we chose it: Bright, fascinating, and entirely unlike anything else out there, they enhance and improve all kinds of dishes.

These unique peppers embody the "wild" in their name, coming across with the general texture and flavor of black peppercorns, with an added bonus of the citrusy punch of grapefruit and the tingle of Sichuan peppercorns. But as entirely unfamiliar as the pepper is, its intense zing and lingering flavor offers plenty of options for how to use it, particularly calling to any type of fish dish.

We tested more than 45 peppercorns, including a variety of brands, styles, and colors, all sourced by our market editors, who researched the category with eyes on quality, price point, origin, and flavor. We ground each peppercorn in uniform grinders and tasted them all on their own to whittle the selection down to a few favorites of each style, then sampled those, crushed in a mortar and pestle, over the course of a week on a variety of foods including steak, cottage cheese, and roasted vegetables.

Features to Keep in Mind When Shopping for Peppercorns

The smell of a peppercorn and especially the strength of the smell did not tend to match the flavor, so forgo sniffing the jar to make decisions. In tasting, the major factors that differentiated the flavor of various peppercorns included heat (though a much more mild and relaxed version than the capsaicin found in chili peppers) and how sweet or fruity they were versus how herbaceous.

While stores sell it, none of the jars of pre-ground peppercorns we tasted had enough flavor to recommend them in any circumstance. When pressed, Dixon said, "I guess if you are in a hurry and don't have something, or are going camping?" But he points out that ground pepper, even well packaged, loses its flavor within days.

Among the varieties of whole peppercorn, the format of the jars didn't matter too much, though the built-in grinders tended to be more trouble than they were worth. Once you buy the peppercorn, Dixon says not to worry too much about storage, just put it in the cabinet. "It's already dried."

Peppercorns, like the ones used to make black, green, red, and white pepper, originate in South India, and many of the best varieties still come from that area. However, as pepper became a commodity product, it spread around the world and top versions now come out of other parts of Asia and from Africa. The main thing Dixon considers important, however, is sourcing as directly as possible to the people growing the peppers. He points to leaders in the field like Burlap & Barrel and Diaspora Co., which work directly with the farmers.

Of the peppers that come from the main pepper plant, piper nigrum, the various types of peppercorn are distinct only in their processing. Unripe peppers start out green, with fresh bright heat, but if they are dried, they become black peppercorns, with the classic heat. Preserving the same fruit unripe before drying results in the bright but less complex flavors of green pepper, while letting it ripen before drying yields red peppercorns and their unique sweetness. White peppercorns come from the same fruit, but are soaked and have their skins removed, which also lightly ferments them, leaving them with a mild, creamy heat. Some companies offer a mix of peppercorns, but Dixon notes that is mainly for color, and we found the flavors muddled and offered little in the versions we sampled.

Other products that are not piper nigrum, but share visual or flavor notes with the pepper often get lumped in with peppercorns, including pretty but bland pink peppercorns and warm, floral long pepper, and in our tasting, Burlap & Barrel's unique wild Timur pepper. Sometimes this category includes Sichuan peppercorns, though those are truly in their own category in terms of what they should bring to a dish and how they are used.

Q: Which variety of black pepper is best?

"For day to day use, I typically go back and forth between the Ashanti and the Cubeb," Dixon says. Both are fairly mild peppercorns, with Ashanti hailing from Ghana and Cubeb from India.

Q: What is the difference between black pepper and Tellicherry pepper?

Tellicherry is a type of black pepper. "[Peppercorns] are mostly named for where they are grown, and they are also graded by size," explains Dixon. "So the Tellicherry name is reserved for the bigger ones from that certain area." However, there is little geographical control over the name, and you will sometimes find it used as the name for any larger black peppercorns, even if they are not from that area of the Malabar Coast in India.

Q: Where do the best peppercorns come from?

"Pepper originated in South Asia," says Dixon, and while the plant grows in many other places now, he still considers the tradition and terroir there to make a significant difference. "The best, in terms of the traditional black pepper, are mostly in India."

Unlike other products we have reviewed, like sparkling water, the more you enjoy pepper and the more pepper you go through, the more you should invest in great peppercorns—and the stronger flavor of great pepper will mean that you actually use less. However, among the top brands (Real Good Food/Wellspent Market, Diaspora Co., Spicewalla, La Boîte, Spice House, Curio, Oaktown Spice Company, and Burlap & Barrel) the differences became ones of preference: how spicy, how floral, or how herbaceous, you prefer your peppercorns, and the type of packaging you find easiest to navigate. Look for tasting notes that match your tastes;  we found that, of the companies that included descriptions on their packaging, they tended to match our tasting experiences.