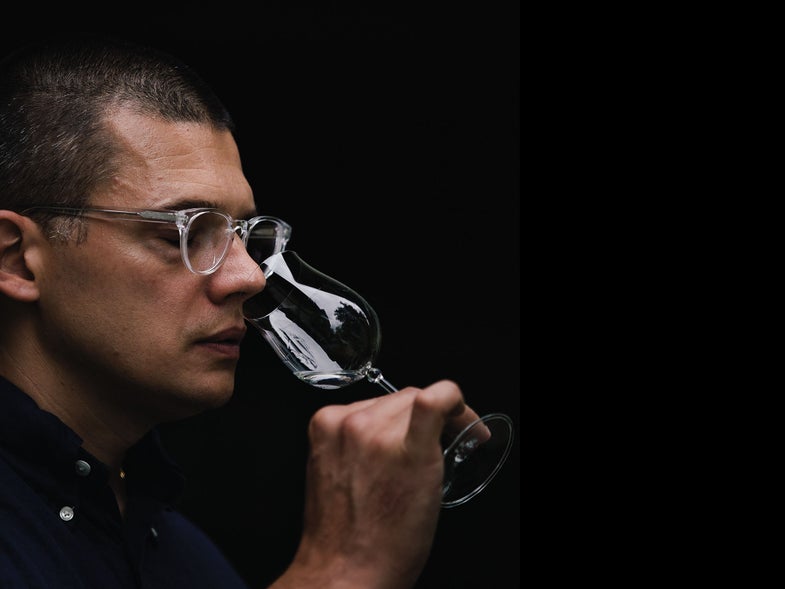 Nicolas Palazzi and Alexander Rainer are walking in the cloud-shrouded Tyrolean Alps, somewhere above Innsbruck, Austria. The sun is setting; the cool air, scented with moss and barnyard. Cowbells ring, flies buzz lazily about.

Palazzi, a Bordeaux-born and New York—based spirits importer, is serious, broad shouldered, solid like the boxer he once was. His company, PM Spirits (Paul-Marie Spirits, named for his father), specializes in discovering, importing, and distributing small-scale, handmade spirits.

Watch: The Spirit Hunter at Work

In an era when so many spirits are conceptualized as brands and traded like commodities, Palazzi’s method of face-to-face reconnaissance is unusual. He approaches producers with the scrutiny and meticulous inquisitiveness of an art appraiser. “It has to be real,” he says of the liquid itself. “I have to feel excited about it—and the people behind it.” Beyond novelty, he always asks, Is this a bottle worth acquiring? Are its creators invested in their work? Palazzi is always searching for the spirit behind a spirit.

When they reach the top of the range, Rainer and Palazzi trade sips of Mirabelle plum schnaps from a forest-green glass pocket flask. The yellow walnut-size fruit are sourced, Rainer says, from Weinviertel, a region in eastern Austria known for its grüner veltliner. He’s bottled them “only in years when the fruit is exceptional”—2004, 2005, and a 2006 that will become a 10-year-old vintage. It’s bright, soft, and tart—the exact flavor of a wild, sour plum. In a country where amateur distilling is common, Rochelt’s spirits are to homemade schnaps as first-growth bordeaux is to table wine.

Rochelt was founded in 1989 by Rainer’s father-in-law, Gunter Rochelt, who was set on perfecting the Tyrolean tradition of distilling eau-de-vie. When Gunter passed away in 2009, Rainer inherited the business along with his wife, Annia, and her two sisters, Julia and Teresa Rochelt. Their spirits are made in extremely limited quantities from difficult-to-source fruits like wild Carpathian raspberries, Styrian Gravenstein apples, and Burgenländer gewürztraminer grapes. Bottled in elaborate, striated green glass pincer bottles (a traditional Austrian design in which the middle is pinched together) and topped with silver stoppers designed by Otto Jakob, a German jeweler whose works are highly collectible, Rochelt’s spirits are expensive (up to $450 for a 375-ml bottle) and have never legally been brought into the United States.

The pair reach a mountain hut where they sit to eat brown bread and landjäger sausage with grainy mustard. On a typical sourcing trip, Palazzi spends most of his time in dusty basements or cellars with dirt floors. “I usually meet people from the land who are digging holes or repairing tractors,” he says. He works most often in France and laments that producers in Cognac are famously tight-lipped, especially in older, family-run operations. Rainer, by contrast, is happy to share the secrets of the family business; he’s proud of their precision, their devotion to tradition, and the legacy they sustain.

This is what Palazzi is looking for: a passion for beautiful materials over replicable merchandise. Hunting spirits, Palazzi often finds himself discovering families—a pair of brothers in Calvados, a fourth-generation cognac maker, a second-generation distiller of biodynamic eau-de-vie—whose work he heard about by word of mouth. (Rochelt came to him through a request from Gabriel Kreuther, an Alsatian restaurant in New York City.) Beyond an eye for quality, Palazzi’s chief talent is having the diligence to gain the trust of people whose businesses were never built to be marketed.

Left: Helga Wiener, a Rochelt employee, cooking apple streudel in the distillery’s kitchen | Right: Palazzi (left) and Rainer enjoying lunch on the patio at the distillery, which feels more like an intimate family home than a commercial business. Michelle Heimerman

This kind of patient scouting—celebrating the unsung and obscure, the handmade and peculiar—is as rare as the spirits he seeks. When he first encounters a new producer, he thinks as much about the people behind it as the product itself.

“The stuff in the glass needs to be pure,” Palazzi says. “And the people behind it need to be truthful.” In the case of Rochelt, he knew the spirits were worth pursuing the moment he had a sample. “I tasted it, and everything was there.” He just needed to meet its makers.

The next day, Rainer and Palazzi sit on the distillery’s terrace, sipping through a series of schnaps. They’ve come to apricot, a Rochelt touchstone. “This one is riper, more vibrant,” Palazzi says, burrowing his nose into a tiny, handmade eau-de-vie glass. “This one is tighter, restrained. The ’08 is good, but the ’09 is better.” Rainer nods as if Palazzi has just passed some sort of test.

Inside the distillery, apricot mash is added to a gleaming copper still. The room smells of baked fruit. “We get these apricots from Wachau, where they’re harvested on the banks of the Danube,” says Rainer. It’s unusual to source fruit this way—grower by grower, region by region, year by year. In fact, Rainer’s process is much like making wine, choosing particular fruits from specific parcels of land in superlative years. “Ripeness matters,” he says. “Where it comes from matters.” He gets red Williams pears and morello cherries from Austria, wild rowanberry from Finland, forest raspberries from Armenia, and oranges from Sicily, among others. He experiments often with new fruits, new growers, and new combinations. And some years he’ll reject fruit that he doesn’t feel will make perfect spirits. This year, the apricots have shown very well.

“Does anything else go in the mash?” Palazzi asks, peering into the porthole of the copper still.

Eau-de-vie aging in a glass balloon at the Rochelt distillery, a process that imparts no flavor or color to the final product. Michelle Heimerman

Up a flight of stairs and into an attic room filled with soft light refracted through large glass balloons filled with vintage eau-de-vie, organized into neat rows, each one’s neck covered only with a small piece of linen. It’s oddly intimate and still, like walking through a museum storeroom filled with works waiting to be framed. Rochelt is singular for many reasons, but most notably for its spirits’ long resting periods. All of its schnaps are aged in these shimmering vessels, some for 12 years or more. This long period of dormancy allows the schnaps to evaporate, concentrate, and meld together in a way that couldn’t be achieved if they were cut with water right away and bottled, which is how most spirits that don’t see the inside of a barrel are made.

In one corner Rainer keeps reserve bottles that will remain at their natural proof. Where many resting rooms are heady with evaporating alcohol, thick with dust, and stacked with sleeping barrels, this room smells only of fruit—brambly berries, perfumed pears, foxy grapes.

“I’ve never seen anything like this,” Palazzi says, wandering through the illuminated glass balloons, sniffing at the linen caps, taking notes.

A Few of Palazzi’s Rare Finds

Navarre Grande Fine Champagne Cognac and Pineau des Charentes
A fourth-generation cognac maker, Jacky Navarre makes his spirits in a way most producers have forgotten. Hand-harvested grapes are distilled on the lees and put into a barrel until they proof naturally to 45 percent ABV, a process that takes 40 to 50 years—yes, half a century.

Cazottes Eau-de-vie and liqueurs in Tarn, France
Laurent Cazottes inherited the knowledge of spirit making from his father, a traveling distiller. In pursuit of purity, Laurent pioneered the idea of growing and distilling his own biodynamic produce, including wild quince, sour cherry, prunelart grapes (a heritage grape from Southwest France), and greengage plums.

Navazos-Palazzi Sherry-cask aged spirits in Jerez
A collaboration between Palazzi himself and famed sherry purveyor Equipo Navazos, these single-cask spirits—including Caribbean rum and Spanish whiskey and brandy—are aged in some of the best cellars in all of Andalucía.