It may conjure memories of a blander culinary era, but creamy-tangy cottage cheese has some unexpected uses. 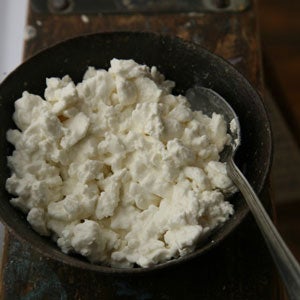 Cottage cheese, that creamy-tangy comfort food sold in plastic tubs in supermarket dairy cases, is often a culinary afterthought these days, considered a relic of bygone diet fads and a blander culinary era. (Richard Nixon is said to have lunched regularly on cottage cheese doused in ketchup.) But this high-protein food, which takes its name from the fact that it was traditionally made at home in the cottages of rural England, has plenty of legitimate uses in all sorts of recipes, some of them from unexpected places. For example, the Ethiopian dish of stewed collard greens called Ayib Be Gomen traditionally calls for an Ethiopian raw-buttermilk cheese, for which good old American cottage cheese makes a fine substitute. Also called pot cheese, popcorn cheese, farmers’ cheese, dutch cheese, and schmierkase, cottage cheese begins as pasteurized skim milk, which is mixed with a starter culture or acids that set off a slow fermentation, which in turn yields curds and whey. The curds are then cut into chunks, slow-cooked in the whey, then washed in water. Finally, the curds are mixed with a dressing of cream and salt. The consistency and tanginess of supermarket cottage cheeses varies from brand to brand. Breakstone’s, for instance, has a smooth, creamy texture and small curds; the “California style” cottage cheese from the Friendship dairy is mild, tangy, and faintly salty; and Nancy’s cultured low-fat cottage cheese boasts a noticeably sour bite. For the ayib be gomen, we sought out the clear plastic tubs of cottage cheese, commonly labeled pot cheese, found at specialty food stores. That variety often contains larger curds and less liquid, so it is a perfect choice for dishes that require thick, rounded textures.